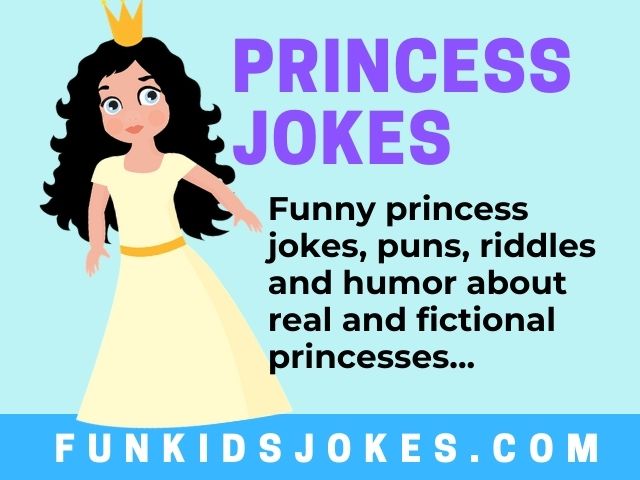 Funny princess jokes for kids and adults of all ages.

Humorous jokes about princesses are funny anytime, but they are especially popular for birthday parties and around Halloween (see: Halloween Jokes) when children like to dress up as princesses, queens and kings (see: King Jokes).

This collection of humor about some of the most famous princesses in history is a hit with teachers, historians, fans of English humor and adults. The jokes about princesses from Disney, DC Comics, Mario Bros and Childrens stories are especially popular with kids and parents.

If you’re planning on having a birthday party or movie night that involves queens, princesses, kings and other royalty, then these princess jokes will bring lots of smiles to your kingdom.

Some of the famous princesses throughout history include:

Some fictional princesses popular with children include:

Q. Which Disney princess would make the best judge?
A. Snow White, because she’s the fairest of them all!

The princess threw a party for her dragon… he was pretty frustrated trying to blow out the candles on the cake.

Q: What’s the easiest way to find a princess?
A: Follow the footprince.

Q: What did Princess Aurora say when her photos weren’t ready for pick-up?
A: Someday my prints will come in. (Princess Aurora is the princess from Sleeping Beauty)

Q: When is a princess strong enough to move a castle?
A: When she’s playing a game of chess.

Q: Which Disney princess made the most clever jokes?
A: Ra-PUN-zel.

Q: Why did Snow White put on SPF 100 sunscreen?
A: Because she’s the fairest one of all.

Q: Why did Ariel throw peanut butter into the sea?
A: To go along with the jelly fish.

Q: What eats more princesses than a dragon?
A: Two dragons.

Q: What .io game does Princess Peach play?
A: Mar.io

Q: How did the police arrest the wrong Disney Princess?
A: They thought she was someone Elsa.

Q: What did the princess do every morning?
A: She woke up of course.

Q: Who was the most seasoned princess?
A: Princess Koriand’r (Coriander is an herb used in cooking)

Q: Which Disney Princess do cows like the most?
A: Moo-lan.

Q: Where does Princess Ariel keep their tiara?
A: In her octo-PURSE.

Q: How does the ocean say hello to Princess Ariel?
A: It waves.

Q: How did the princess know how heavy the dragon was?
A: It came with scales.

Q: What does Princess Peach use to get things off the high shelf?
A: A toad stool.

Q: Why is Cinderella so bad at soccer?
A: Because her coach is a pumpkin.

Q: Why didn’t Princess Jasmine go to the coffee shop?
A: They didn’t serve royal-tea.

Q. Why did Dopey bring Snow White paper and crayons?
A: She told him it was time to draw the curtains.

Q: Who won the princess race?
A: Rapunzel won by a HAIR.

Q: Why did Cinderella get kicked off the soccer team?
A: Because she always ran away from the ball.

Q: What do Princess Ariel use for money?
A: Sand dollars.

Q: Where should Ariel have gone to find her lost voice?
A: The lost and flounder.

Q: What did Mario say to Princess Peach in the underground?
A: I Lava You.

Q: What did Princess Leia say after planting some trees?
A: May the forest be with you.

Q: How did Princess Tula of Poseidonis travel?
A: By seahorse.

Q. What does Ariel like to put on her biscuits?
A: Merma-lade.

Q: Why was Princess Ariel grounded?
A: All her grades were below C level.

Q: What did Cinderella say when the prince ate her ice cream?
A: How dairy!

Q: Why doesn’t anyone want to be one of Snow White’s dwarfs?
A: Statistics show that 86% of them aren’t Happy. (6 out of 7 are not the dwarf named Happy).

Q: Why did Princess Jasmine go to bed without any supper?
A: She didn’t do her homework and that was the penal-TEA. (Jasmine is a type of tea)

Q: Why did the little mermaid take a helicopter ride?
A: To get an Ariel view.

Q: What does Diana Prince, the Princess of Themyscira, use to make sandwiches?
A: Wonder Bread