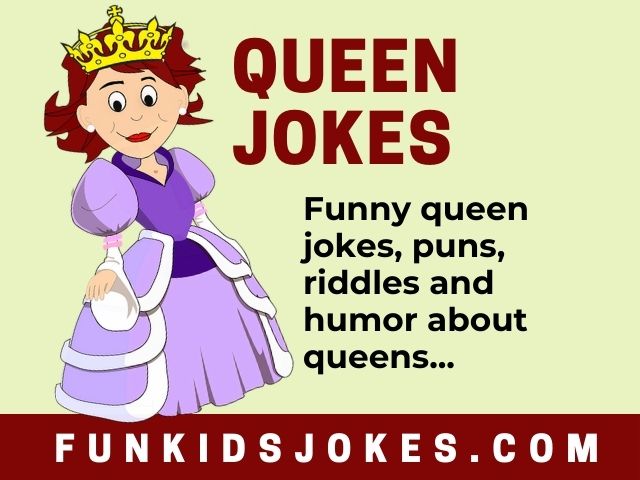 Queen jokes for kids and adults of all ages.

These clean queen jokes include queen puns, riddles and knock-knock jokes about queens from England, Egypt, Spain, France and more.

Humorous queen jokes like these are funny anytime, but they get even more attention around Halloween (see: Halloween Jokes) when children like to dress up as queens, princesses and kings (see: King Jokes).

This collection of humor about royal queens is especially popular among teachers, historians, fans of English humor, fans of Egyptian history, parents and children.

If you’re planning on having a birthday party or movie night that involves queens, princesses, kings and other royalty, then these queen jokes will come in handy.

Some of the most famous queens in history include:

Some popular fictional queens that children may recognize include:

Q: What is a royal pardon?
A: What a Queen says after she burps.

Knock Knock.
Who’s there?
Queen?
Queen who?
Queen your room, it’s a mess.

Q: Why was the scientist waiting for the Queen of England to fart?
A: To study noble gas.

Q: Where did Queen Isabella keep her armies?
A: Up her sleevies.

Q: What is the first thing a queen Victoria did when she came to the throne?
A: She sat down.

Q: How did the cow address Queen Victoria?
A: As “your moo-jesty”

Q: Why didn’t the Queen go to the American coffee shop?
A: They didn’t serve royal-tea.

Q: What did Quenn Nefertiti of Egypt say when she had a nightmare?
A: I want my mummy!

Q: What do you call a Queen when she climbs up a ladder?
A: Your highness.

Q: What kind of tea do you drink with Queen Elizabeth?
A: Royal tea.

Q: Where do Egyptian Queens go out to eat?
A: Pizza Tut.

Q: Which famous Queen loved to play card games?
A: Queen of Hearts

Q: What did the police say when Queen Grimhilde’s mirror went missing?
A: That they’d look into it. (Queen Grimhilde is the evil queen from Snow White)

Q: Where do Egyptian queens get crowned?
A: On the head.

Q: What did Marie-Antoinette say when the King ate her ice cream?
A: How dairy!

Q: How did the yellow jacket annoy the queen?
A: It was mis-bee-having.

Q: Why didn’t Cleopatra admit she was wrong?
A: She was the Queen of de-Nile.

Q: Why did the queen go to the dentist?
A: To get a crown on her tooth.

Q: Why did the Queen need an umbrella?
A: She was the reigning monarch.

Q: Which Queen spent a lot of time at the beauty salon?
A: Queen Hera.

Q: Why is England considered the wettest country?
A: Queen Elizabeth II reigned for almost 70 years.

There are so many chairs in Buckingham Palace… apparently, they never get throne out.

Q: Who helped Queen Hatshepsut of Egypt when she hurt her back?
A: Her Cairo-practor.

Q: Who was Marie-Antoinette’s favorite musical group?
A: Queen!