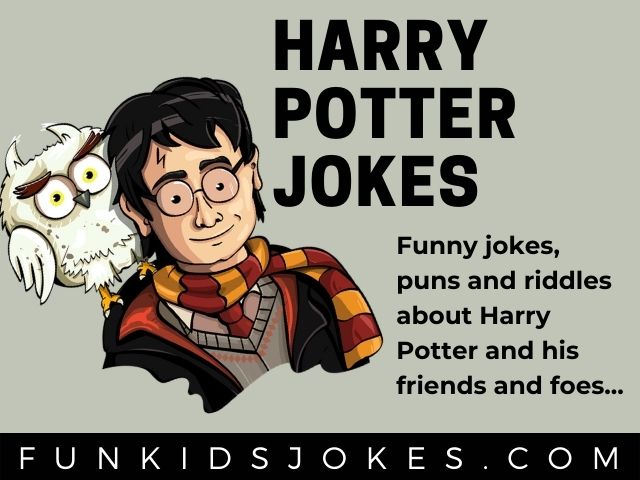 These Harry Potter riddles, one-liners, puns, and knock-knock jokes are for fans of Harry Potter books and movies. They are also fun for Halloween since Harry Potter characters are popular costume choices.

Harry Potter is one of the most popular series of books ever written. If you have a Harry Potter fan in the house, or in your class, then these jokes are perfect for you to share. You can also share some Potterhead humor on Halloween, when Harry Potter jokes are always a popular costume among avid readers.

Thinking about having a Harry Potter party? Make sure you include some of these jokes to make your Potter party the best ever. Write them on little pieces of paper, stick them in balloons, blow up the balloons and make up a game where kids pop them and tell the jokes!

You’ll find jokes about Harry Potter, plus popular and obscure characters from the Harry Potter book series and movies.

Q: What was Hagrid’s favorite puzzle toy?
A: Rubeus Cube. (his first name is Rubeus and Rubik’s Cube is a puzzle toy).

Q: What do you call a gardener that has a beard?
A: Hairy Potter.

Q: Which Hogwarts professor gets blamed for everything?
A: Professor Snape Goat.

Q: Who might be able to take over for Harry in Quidditch?
A: Oliver would… (Oliver Wood is a Quidditch captain)

Q: Did Harry’s mother pot daisy’s?
A: No, she was a Lily Potter. (His mom’s name was Lily, which is also a type of flower)

Q: Why did Dumbledore get annoyed at the sound of chains in the middle of the night?
A: It was one of his Peeves. (Peeves is a poltergeist at Hogwarts and Peeve is also a word for something that annoys someone).

Q: Why did Wormtail have a pen outside his home?
A: For a Pett-he-grew (Peter Pettigrew is also called Wormtail)

Q: How many Hufflepuffs does it take to screw in a lightbulb?
A: All of them

Q: Why did the Dark Lord cross the road?
A: Because Potter couldn’t stop him

Q: What was Mad-Eye Moody considered the worst professor at Hogwarts?
A: He couldn’t controll his pupils.

Q: How does Voldemort keep his breath fresh?
A: He eats de-mentos.

Q: How many wizards does it take to change a lightbulb?
A: None – wizards don’t use electricity!

Q: Why wouldn’t Ron’s car move?
A: It got stuck in a quid-ditch

Q: Why does Voldemort use social media so much?
A: He likes to have followers.

Q: What does Aragog do on his day off?
A: He goes fly fishing.

Q: How many wizards does it take to screw in a lightbulb?
A: Two. One to hold the bulb and one to rotate the room.

Q: Why did Trevor cross the road?
A: To get away from Long Bottom

Q: How did Aragog get in touch with other spiders?
A: The world wide WEB

Q: How did the winged, mythical creature get into Hogwarts?
A: Through the Gryffindor.

Q: Why was Draco’s shirt covered with dirt?
A: He spent the day Slytherin

Q. Why did the quidditch player travel on a broom?
A. He didn’t have a vacuum cleaner

Q: Why did Professor Snape stand in the middle of the road?
A: So you won’t know which side he’s on.

Q: What did Harry Potter say when Hermione didn’t his knock knock joke?
A: There must be some thing RON with you!

Q: Why do you call it when a wand goes missing at Hogwarts?
A: A Hogwarts Mystery!

Q: Why doesn’t Voldemort have glasses?
A: Nobody nose.

Q: How does Harry Potter get rid of a skin rash?
A: With quit-itch.

Q: How do the Malfoys enter a room?
A: They Slyther-in…

Q: How do you know if someone at Hogwarts is a pureblood?
A: Don’t worry they’ll let you know.

Q: What does Harry Potter’s red-haired friend have in common with a potion pot?
A: They’re both cauld-ron.

Q: What did the clown say to Harry Potter when he wouldn’t smile?
A: Why so Sirius?

Q: What did Ron Weasley say when Harry found his missing wand?
A: That’s WANDerful!

Q: Why does Voldemort use Twitter instead of Facebook?
A: Because he only has followers, not friends

Q: Why didn’t the professors like having Fred and George Weasley at Hogwarts?
A: They never knew which witch was which.

Q. What happened to the sorcerer with an upside-down nose?
A. Every time he sneezed his hat blew off.

Q: What’s the first thing wizards do in the morning?
A: They wake up.

Q: What did the Golden Snitch say when Harry Potter was itchy?
A: Quidditching!

Q: How do Death Eaters freshen their breath?
A: With Dementos.

Q: What do you call a Potterhead on a horse?
A: Harry Trotter.

Q: What is Sasquatch’s favorite book?
A: Hairy Potter.

Q: How do Hogwarts students go on field trips?
A: They take the albus

Q: What do Hogwarts students do to pass the time?
A: Try to solve their Rubeus cubes.

Q: What do Ravenclaw’s wear on their feet?
A: Terry Boots.

Q: What’s the best thing to use to catch fish at Hogwarts pond?
A: A Griphook.

Q: What did Harry Potter wear when his hair fell out?
A: A Hedwig.

Q: What should you do if you have question about jail?
A: Azkaban

Q: Why did the Slytherins cross the road twice?
A: Because they are double-crossers.

Q: What kind of cereal do they have at Hogwarts?
A: Huffle Puffs.

Q: How much does candy cost in the Hogwarts cafeteria?
A: A Millicent Bulstrode

Q: Why isn’t Fluffy a good dancer?
A: Because he has two left feet.

Q: Where do you find Dumbledore’s Army?
A: Up his Sleevy

Q: What did Fluffy say when he sat on sandpaper?
A: Ruff Ruff!

Q: What type of markets does Fluffy avoid?
A: Flea markets.

Q: Who was the most giving faculty member at Hogwarts?
A: Charity Burbage

Q: What did Percy say when he wanted someone to clean the dirty swimming pool?
A: Penelope, Clearwater.

Q: What do auror’s say when they eat tasty food?
A: It’s Dawlish!

Q: What do Harry Potter and Charlie Brown have in common?
A: They’re both in love with the little red haired girl.

Q: What do you call a Hufflepuff with two brain cells?
A: Gifted

Q: Why did Aragog buy a car?
A: So he could take it out for a spin

Q: Why was Aragog such a good baseball player?
A: He knew how to catch flies.

Q: Which is Aragog’s favorite day of the week?
A: Flyday

Q: What did they put in Harry Potter’s fruit basket?
A: Arabella Figgs

Q: Which headmistress eared a gold medal?
A: Olympe Maxime

Q: Which member of the Order of the Phoenix is always grouchy?
A: Alastor (Mad-Eye) Moody

Q: Who always leaves people scratching after seeing them?
A: Rita Skeeter

Q: Why did Crabbe and Goyle cross the road?
A: Because Draco did.

Q. What do you call Hogwarts students that share a room?
A. Broom-mates.

Q: Which Minister for Magic has a car named after him?
A: Prius Thicknesse

Q: Do you know which Hogwarts student do you think will help you learn Quidditch?
A: I think Oliver Wood.

Q: How did Harry Potter make a bulbasaur?
A: Bulbadox powder.

Q: Why did Harry Potter throw up after the quidditch match?
A: He got broom sick.

Q: Why did Professor Snape stand in the middle of the road?
A: So nobody would know which side he’s on.

Q: What do Wizards order most for lunch at Honeydukes?
A: Peanut butter and jelly slug sandwiches.

Q: What is the name of a diabolical wizard planning to take over the world?
A: Harry Plotter.

Q: What did the Snitch say when Harry Potter asked if he cheated?
A: Don’t be quiddiculous.

Knock knock
Who’s there?
Gryffin
Gryffin who?
Gryffindor’s locked, let me in.

Knock Knock.
Who’s There?
You Know.
You Know Who?
That’s right, I do!