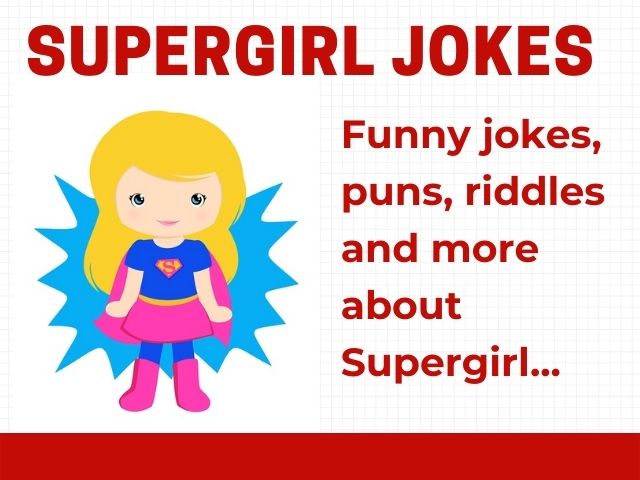 This is the best collection of Supergirl jokes anywhere, with Supergirl puns, riddles, one liners, knock-knock jokes and more.

These Supergirl jokes are clean and safe for children of all ages – including super girls.

They are great for parents, teachers, babysitters, super hero fans and anyone else looking to share some laughs with the kids in their lives.

Supergirl jokes are fun anytime, but especially for kids birthday parties and around Halloween when children like to dress up as their favorite superhero.

If you really like Supergirl, or have kids that do, then bookmark this page and check back often for new additions. You’ll probably also want to check out our entire collection of Superhero Jokes, which includes favorites such as Batman Jokes, Superman Jokes, The Flash Jokes, Ant-Man Jokes and more.

Jokes about Supergirl for Kids

Q: What is Supergirl’s favorite drink?
A: Lemon AID.

Q: Which university should Supergirl have gone to instead of Stanhope College?
A: KENT State.

Q: Why doesn’t Supergirl like to go out after dinner?
A: She’s afraid of krypto-night.

Q: What does Supergirl use to eat cereal?
A: A Superbowl

Q: What do you get if you cross the girl of steel with a chowder?
A: Souperwoman.

Q: Why did all the pictures come out dark from Supergirl’s holiday party?
A: She forgot to invite the Flash.

Q: What does Supergirl put in her lemonade?
A: Just ice.

Q: What is Supergirl favorite drink?
A: Fruit PUNCH.

Q: What happens to Supergirl after she eats a tic-tac?
A: He has super breath.

Q: What is Supergirl’s favorite sporting event?
A: The Super Bowl

Q: Why is Kara Zor-El such a bad cook?
A: Her cooking is Superbland.

Knock knock.
Who’s there?
Soup.
Soup who?
Supergirl, that’s who!

Q: When does Supergirl sleep?
A: At Krypto-night.

Q: What’s the name of Supergirl’s home planet in an opposite dimension?
A: Krypt-off.

Q: What type of home does Supergirl live in?
A: A Supermansion.

Q: Where does Supergirl go potty?
A: In the Supercan.

Q: Why does Supergirl tell jokes while she runs?
A: She’s an Action Comic.

Q: Why does Supergirl carry around a power converter when she’s in the United States?
A: Because she’s from the DC Universe.

Q: Why is it so easy for Supergirl to jump higher than tall buildings?
A: Because buildings can’t jump.

Q: What do you get when you cross a pig and Supergirl?
A: The girl of Squeal.

Q: Where does Supergirl go on her summer vacation?
A: Cape Cod.

Q: Which stone-faced superhero watches from the tops of buildings?
A: Supergargoyle.

Remember to check out our entire collection of Superhero Jokes, which includes fan favorites like Batman Jokes, Superman Jokes, The Flash Jokes, Ant-Man Jokes and more.