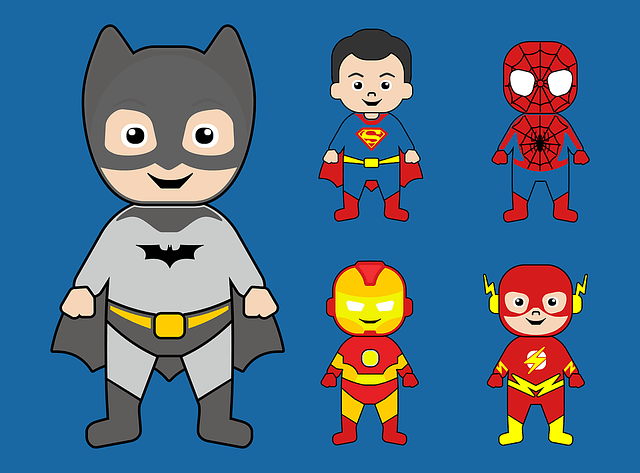 Super hero jokes for kids, parents, teachers and adults, especially fans of Marvel Comics and the Avengers. If you’re looking for clean Superhero jokes, then this collection of jokes about superheroes is for you.

These Super Hero Jokes are funny for kids of all ages. They are great for parents, teachers, coaches and anyone else looking to share a laugh about superheroes with the children in their lives.

Superhero jokes are fun anytime, but especially around Halloween when kids are excited about dressing up as their favorite super hero.

If you really like superheroes, or have kids that do, then bookmark this page and check back often because we’re constantly adding new jokes to this page.

Jokes about Super Heroes for Kids

Q: Why doesn’t Superman like to go out after dinner?
A: He’s afraid of krypto-night.

Q: Which super hero is the most curious?
A: Wonder Woman

Q: Why did Bruce’s dentist give him mouth wash?
A: Because he had bat breath.

Q: Which super hero runs in marathons?
A: Irun Man

Q: What outdoor sport does Spiderman like?
A: Fly fishing.

Q: What does Superman’s use to eat cereal?
A: A Superbowl

Q: Which superhero likes to use public transportation?
A: Bus Lightyear.

Q: Which superhero spends too much time in the sun?
A: Cap-TAN America

Q: Why did Spiderman borrow his parent’s car?
A: To take it out for a spin.

Q: What is Aquamans favorite bird?
A: Sea-gulls.

Q: Why is Spiderman such good baseball player?
A: He knows how to catch flies.

Q: What is Aquaman’s favorite football team?
A: The Miami Dolphins.

Q: What was Wolverine’s job working at the restaurant?
A: Shredding carrots.

Q: What do you get when you cross Spiderman with an ear of corn?
A: Cobwebs.

Q: How many caped crusaders does it take to change a light-bulb?
A: None – they like it dark.

Q: What is Spider-Man’s favorite month?
A: Web-ruary

Q: Why was Thor avoiding his brother?
A: He Odin money.

Q: Why did Wonder Woman have to keep getting new airplanes?
A: She kept forgetting where she parked her old one (her plane is invisible).

Q: Why did Spiderman get in trouble with his mom?
A: He spent too much time on the web.

Q: What do you get when you combine Robin with a milk shake machine?
A: Robin the Boy Blender.

Q: What does Batgirl wear to the superhero ball?
A: Her Dark Knight gown.

Q: Where does Hal Jordan get his tomatoes?
A: From a Greenhouse.

Q: What did Bruce Wayne’s mommy put over his crib?
A: A bat mobile.

Q: Why did Robin pick up the telephone?
A: It bat-a-rang.

Q: How did Spider-Man learn how to make his spider-suit?
A: The World Wide Web

Q: Why did it take Thor so long to find his brother?
A: He couldn’t Lokite him.

Q: What is Aquaman’s favorite color?
A: Aquamarine

Q: What was Captain America when he was younger?
A: Lieutenant America

Q: What does Bruce Wayne give to kids on hot summer days?
A: Batcycles

Q: Why couldn’t Batman go fishing?
A: Robin ate all the worms.

Q: What do you get if you cross the man of steel with a chowder?
A: Souperman.

Q: Why did all the pictures come out dark from the Superhero party?
A: They forgot to invite the Flash.

Q: Who is Thor’s favorite singer?
A: MC Hammer

Q: How is Spiderman like toy tops?
A: He’s always spinning.

Q: Why did Wolverine bring Wonder Woman with him to the used car dealer?
A: So she could use her Lasso of Truth on the salesman.

Q: How does Spiderman communicate with other superheroes?
A: The world wide web.

Q: What do superheroes put in their drinks?
A: Just ice.

Q: Why was Dick Grayson called Robin?
A: Calling him the early bird sounded silly.

Q: Why was Batman so serious?
A: He wasn’t the Joker.

Q: What’s the difference between Batman and the Penguin?
A: Batman can go into a jewelry store without robin.

Q: What baseball position does Spiderman like most?
A: The outfield because he catches the most flies.

Q: What is Spiderman’s favorite day of the week?
A: Flyday.

Q: What is Iron Man’s best gymnastic move?
A: A ferrous wheel.

Q: What is Thor’s favorite food?
A: Thor-tillas

Q: Why doesn’t Mr. Freeze have any friends?
A: He gives everyone the cold shoulder

Q: What is Supermans favorite drink?
A: Fruit punch.

Q: Why did Batman get upset while playing cards.
A: They kept saying the Joker was wild.

Q: How did Ant Man win the Nobel Peace Prize?
A: He was brill-ant.

Q: Why doesn’t Ant Man play video games?
A: He lost to Ultron too many times.

Q: What party game does Ant Man like most?
A: The scAVENGER hunt.

Q: How does Ant Man keep his suit from getting wrinkled?
A: With help from Iron Man.

Q: What dance do Ant-Man and Wasp do together?
A: The jitterbug.

Q: How do Ant Man and Wasp get around town?
A: They ride on the Buzz.

Q: What did AntMan name his musical band?
A: Avengers Ensemble.

Q: How is Spider-Man like a toy top?
A: He’s always spinning.

Q: What is Spider-Man’s favorite Disney movie?
A: Peter Pan

Q: How does Spider-Man communicate with other superheroes?
A: The world wide web.

Q: What does Spider-Man put in his drink?
A: Just ice.

Q: What do you call Spider-Man joining the Marvel Universe?
A: A Spin-Off

Q: What baseball position does Spider-Man like most?
A: The outfield because he catches the most flies.

Q: What is Spider-Man’s favorite day of the week?
A: Flyday.

Most Popular Superheroes from Marvel & DC