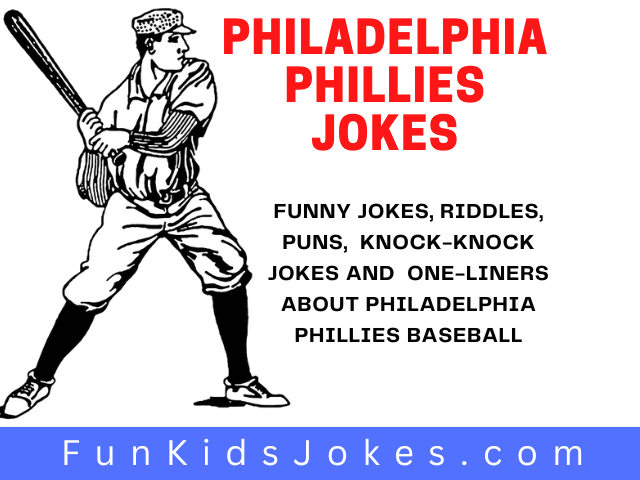 Philadelphia Phillies Jokes for kids and adults of all ages.

These are the Best Phillies jokes anywhere and are great for parents, teachers, Phillies fans, baseball coaches and baseball fans.

These Phillies Jokes are even good for fans of other teams looking for some good-hearted jokes at the expense of Philadelphia! Throwing a Philadelphia Phillies party? These jokes about the Phillies baseball team will bring lots of laughs. Write them on pieces of paper or Post-it notes and spread them around. Do a stand-up routine or print them out and do a joke karaoke during the 7th inning stretch.

These Phillies Jokes for Kids include riddles, puns, one liners, and knock knock jokes. And since they are Clean Phillies Jokes, you know they are kid friendly.

Q: Who would be the best choice as a Phillies relief pitcher?
A: The mummy – because he knows how to wrap up.

Q: Why should you take Noah Syndergaard camping with you?
A: To pitch the tent.

Q: What do average Phillies fans get on their I.Q. tests?
A: Lots of drool.

Q: Why did Bryce Harper wear old stockings when he played?
A: They had runs in them!

Q. Why did Alec Bohm bring string to the game?
A: So he could tie the score if he had to.

Q: What do Phillies ballplayers do when their eyesight goes bad?
A: They get jobs as an umpire.

Q: What’s does a dirty floor and the Philadelphia Phillies have in common?
A: They both get swept.

Q: Which Phillies baseball player holds water?
A: Ranger Suarez – because he a pitcher.

Q: Why are some Phillies Park umpires overweight?
A: They always clean their plate.

Q: Why did Rob Thomson want spiders to play for the Phillies?
A: They know how to catch flies.

Q: Why did the police officer go to Citizens Bank Park?
A: Someone stole second base!

Q: Which superhero did the Phillies try to sign as their designated hitter?
A: Batman.

Q: What’s the silliest song to sing at Citizens Bank Park?
A: “Take Me Out to the Ballgame” because everyone is already there!

Q: What do young Phillies fans like about going to the park?
A: The swings.

Q: Why did the Phillies only want frogs in the outfield?
A: They never miss a fly.

Q: What do you get when you cross Noah Syndergaard with a carpet?
A: A throw rug.

Q: How do Phillies baseball players stay cool?
A: By standing close to the fans.

Q: Why was the tiny ghost asked to site in the Phillies dugout?
A: They needed a little team spirit.

Q: Why do the Phillies lose so many day games?
A: Their bats only wake up at night.

Q: What’s do Aaron Nola and a professional bowler have in common?
A: You can count on them both to throw strikes.

Riddle: Brandon Marsh leaves home, makes a left turn, another left, and then another left before going home again. When he gets home he finds two men in masks waiting for him! Who are they? Answer: The catcher and the umpire.

Q: What do Phillies players lose every night?
A. Their shadows.

Q: According to a new poll 95 percent of people love watching baseball.
A: The other 5 percent are Phillies fans.

Q: If the Sixers basketball team were chasing the Phillies baseball team, what time would it be?
A: Five after nine.

Q: What do you get when you cross a Phillies baseball player with a monster?
A: A double header.

Q: Where does Brandon Marsh go to dance?
A: At a base ball!

Q: What did Nick Castellanos say to the baseball?
A: Catch you later.

Q: Why is it hotter after a Phillies baseball game?
A: All the fans have left.

Q: When is a Phillies outfielder like a spider?
A: When he catches flies.

Q. What runs around a Citizen Bank Park’s field but never moves?
A: A wall.

Q: Why did the police officer go to the Phillies game?
A: He heard that someone stole second base.

Q: Why are Phillies players so rich?
A: Because they play on diamonds.

Q: What does J.T. Realmuto wear on Halloween?
A: A Face Mask. (He plays catcher)

Q: What happens to a Phillies player who breaks the rules?
A: They get a penal-TEA.

Q: Why shouldn’t toddlers wear a Phillies jerseys?
A: It would be a choking hazard.

Q: Did you tell Kyle Schwarber the joke about the pop fly?
A: Don’t – it will just go over his head.

Q: What is harder for Yuli Gurriel to catch the faster he runs?
A: His breath!

Q: What’s the difference between Phillies fans and mosquitos?
A: Mosquitos are only annoying during the summer.

Q: What’s the difference between a Phillies fan and a baby?
A: Babies stop whining after a little awhile.

Q: What do the Phillies and lawn furniture have in common?
A: They both fold in October.

Q: Why is Halloween Philadelphia’s favorite holiday?
A: It’s the only thing they have to do in October.

Q: How are the Phillies like a grizzly bear?
A: Every October, they go into hibernation.

Q: Why doesn’t the Phillies baseball team have a website?
A: They don’t know how to string three W’s together.

Q: What do the Phillies and a mailman have in common?
A: Neither deliver at night.

Q: How often do Phillies players call each other during the off-season?
A: They touch base every once in a while.

Q: Why did the Phillies players cry when they lost?
A: He’s on a bawl club.

Q: How did Noah Syndergaard pitch a winning baseball game without throwing a ball?
A: He only threw strikes.

Q: Why did Bryce Harper bring a pacifier to the game?
A: He wanted to play like the Babe.

Q: What do you call the winning team at Phillies home game?
A: Visitors.

Q: Why are centipedes not allowed to play for the Phillies ?
A: It takes too long to put their cleats on.

Q: What did the Phillies fan do when his team won the World Series?
A: Turned off his Xbox.

Q: Who walks back and forth screaming one minute, then sits down weeping uncontrollably the next?
A:The manager of the Phillies baseball team

Q: How do you know when a Phillies pitcher is having a bad day on the mound?
A: When the crowd starts to sing “Take Him Out of The Ball Game.”

Q: What can you do just as well as a Phillies player?
A: Watch the World Series live on TV.

Q: What rule did the zebra umpire have to explain to the Phillies?
A: Three stripes and you’re out.

Q: What do you call 28 rich people sitting around a TV to watch the World Series?
A: The The Phillies.

Q: Why did the Phillies shut down their website?
A: They weren’t getting any hits.

Q: Why is Ranger Suarez such a good singer?
A: Because he has a perfect pitch.

Q: What did Kyle Schwarber do when the coach said to steal second?
A: He grabbed the base and took it home.

Q: When should Philadelphia baseball players wear armor?
A: When they play knight games.

Q: What did the Philadelphia Phillies think about their new stadium lights?
A: They gave it GLOWING reviews.

Q: What song do Phillies fans sing before the bottom of the ninth inning?
A: None… the fans have already left by then!

Q: Where do Phillies players go when they need new uniforms?
A: New Jersey.

Q: Why does it take Bryson Stott longer to run from 2nd base to 3rd base than from 1st base to 2nd base?
A: Because there is a short stop in the middle.

Q: Where shouldn’t a Phillies pitcher ever wear red?
A: In the bull pen.

Q: Why did Zack Wheeler go to the car dealer?
A: He wanted to learn a sales pitch.

Q: What do you get when you cross a tree with a Phillies baseball player?
A: Babe Root.

Q: How is the Phillies roster similar to a pancake?
A: They both need good batters.

Q: What has 18 legs and catches flies?
A: The Phillies baseball team.

Q: How do Phillies baseball players stay cool?
A: By sitting next to the fans.

Q: What does J.T. Realmuto put his food on?
A: Home plate.

Q: What is harder for Trea Turner to catch the faster he runs?
A: His breath!

Q: Did you hear the joke about the Washington Nationals baseball?
A: It will leave you in stitches.