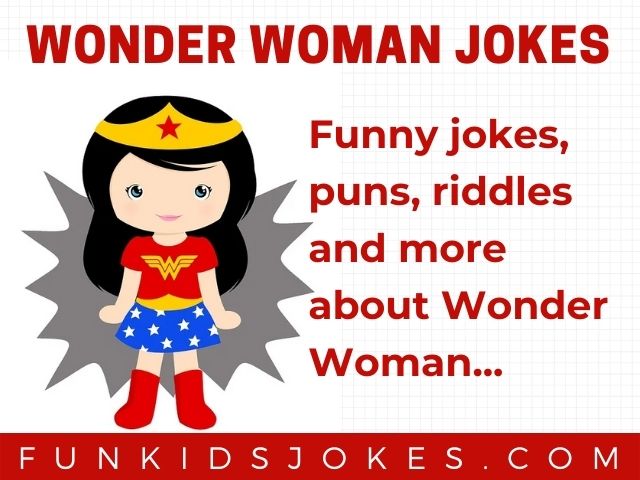 This is the best collection of clean Wonder Woman jokes anywhere, with Wonder Woman puns, riddles, one liners, knock-knock jokes and more.

These Wonder Woman jokes are funny for children and adults of all ages. They are fun for parents, teachers, babysitters, superhero fans and anyone else looking to share some comical laughs – especially with the children in their lives.

Wonder Woman jokes are fun anytime, but especially for kids birthday parties and around Halloween when children like to dress up as their favorite superhero.

Q: Which super hero is the most curious?
A: Wonder Woman

Q: Which superhero gets lost often when walking around?
A: Wander Woman.

Q: Why did Wonder Woman go to the beauty salon?
A: She ran out of Themyscira.

Q: What does Wonder Woman do before bedtime?
A: Puts her pajamazon…

Q: Why does Wonder Woman get asked out to dinner, but not to lunch or breakfast?
A: Because she’s a Supperhero.

Q: Why was the boy worried when he told his teacher that a dog ate his homework?
A: His teacher was Wonder Woman – and she has a lasso of truth!

Q: How did Wonder Woman fix the broken vase?
A: A lot of Super Glue

Q: Why did Wonder Woman have to keep getting new airplanes?
A: She kept forgetting where she parked her old one (her plane is invisible).

Q: What does Diana Prince, the Princess of Themyscira, use to make sandwiches?
A: Wonder Bread

Q: Why did all the pictures come out dark from Wonder Woman’s holiday party?
A: She forgot to invite the Flash.

Q: What would you get if you cross Wonder Woman with a Transformer?
A: Amazon Prime.

Q: Why did Wolverine bring Wonder Woman with him to the used car dealer?
A: So she could use her Lasso of Truth on the salesman.

Q: What is Wonder Womans favorite childrens book?
A: Alice in Wonderland.

Q: What does Wonder Woman put in her lemonade?
A: Just ice.

Q: Why was Wonder Woman late to the Justice League meeting?
A: She couldn’t find her jet – it’s invisible!

Q: What is Wonder Woman’s favorite drink?
A: Fruit PUNCH.

Q: Which superhero can you only see from a distance?
A: Yonder Woman.

Q: What is the best part of a Wonder Woman joke?
A: The PUNCH line.

Knock knock.
Who’s there?
One.
One who?
Wonder Woman, that’s who!

Q: What did Wonder Woman say to the Spider Man?
A: You bug me.

Q: Where does Wonder Woman do most of her shopping?
A: Amazon.

If you really like Wonder Woman, or have kids that do, then bookmark this page and check back often for new additions. You’ll probably also want to check out our entire collection of Superhero Jokes, which includes favorites such as Supergirl Jokes, Batman Jokes, Superman Jokes, The Flash Jokes, Ant-Man Jokes and more.