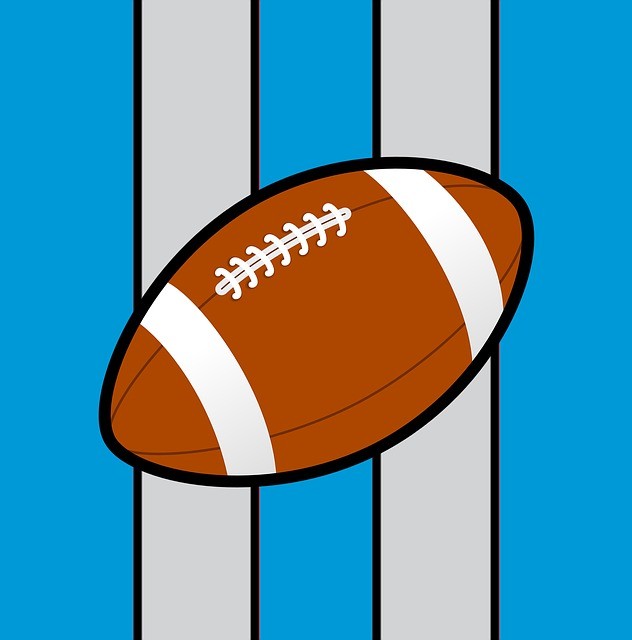 These jokes about football are great for parents, teachers, coaches and kids of all ages. Who could come up with funny, safe football jokes? We could, that’s who!

If you have any football fans or players in the house, then jot some of these onto Post-it notes and put them in place where they’ll find them over the course of the day.

If it’s game day, then put a Post-it on the bathroom mirror with a funny football joke. It’s simple little things like this that make kids happy. You can also take a look at all of our pro football joke collections or teams, such as Dallas Cowboy Jokes and Chicago Bears, or Super Bowl Jokes.

Q: Why did the football coach go to the bank?
A: To get his quarter back.

Q: What do football players wear on halloween?
A: Face Masks!

Q: How do football players stay cool?
A: By standing close to the fans.

Q: Which two football teams played in the pirate superbowl?
A: The Seahawks and the Buccaneers.

Q: What kind of tea do football players drink?
A: Penaltea

Q: Why was the tiny ghost asked to join the football team?
A: They needed a little team spirit.

Q: Why didn’t the dog want to play football?
A: It was a boxer.

Q: Where do football players dance?
A: At a foot ball!

Q: What do football players do when they get overheated?
A: They get closer to some of the fans.

Q: Why did the poor quarterback have his receivers cross at mid-field?
A: He was trying to make ends meet

Q: Why didn’t the skeleton play football?
A: His heart wasn’t in it

Q: Why are centipedes not allowed to play on bug football teams?
A: It takes too long to put their cleats on

Q. What did the football coach say to the broken candy machine?
A. Give me my quarterback!

Q: Where do a football players go when they need a new uniform?
A: New Jersey.

Q: How is a football referee like an angry chicken?
A: They both have fowl mouths.

Q: When should football players wear armor?
A: When they play knight games.

Q: Which state should the Tampa Bay Buccaneers move to?
A: Arrrrrrrrrkansas

Q: What do you get when you cross a quarterback with a carpet?
A: A throw rug.

Q: What did the receiver say to the football?
A: Catch you later.

Q: What is harder to catch the faster you run?
A: Your breath!

Q: Why do ballet dancers make such good NFL kickers?
A: They know how to split the uprights!

Q: Where is a ghost’s favorite spot on a football field?
A: Under the ghoul posts!

Q: What is it called when a dinosaur gets a touchdown?
A: A dino-score

Q: Who is the leader of the Tampa Bay Buccaneers?
A: Captain Hook!

Q: Why shouldn’t you play football in the jungle?
A: There are too many cheetahs!

Q: Why did the football quit the team?
A: It was tired of being kicked around.

Q. Why did the football player bring string to the game?
A: So he could tie the score

Q. What runs around a football field but never moves?
A: A fence

Q: What did the bumble bee running back say after getting a touchdown?
A: Hive scored

Q: Why did the chicken get ejected from the football game?
A: For persistent fowl play.

Q: What are successful kickers always trying to do?
A: Reach goals.

Q: Why couldn’t the defensive football player pass his test in school?
A: He was a tackling dummy.

Q: Why couldn’t the all-star football player listen to music?
A: Because he broke all the records.

Q: What do you call a person who walks back and forth screaming one minute, then sits down weeping uncontrollably the next?
A: A football coach

Q: Where do quarterbacks go to dance?
A: Footballs.

Q: Why didn’t the lousy football team have a website?
A: They couldn’t string three W’s together.

Q: Why can’t you play football with pigs?
A: They hog the ball.

Q: How are scrambled eggs like a losing football team?
A: They’ve both been beaten.

Q: Which football team has the coolest helmets?
A: The one with the most fans.

Q: Why was Cinderella such a poor football player?
A: Her coach was a pumpkin.

Q: What time is it when a football team chases a lacrosse team?
A: Eleven after nine. (9:11)

Q: What do you get when you cross a running back and the Invisible Man?
A: Scoring like no one has ever seen.

Q: What kind of football team cries when it loses?
A: A bawl club.

Knock, knock.
Who’s there?
Uriah.
Uriah who?
Keep Uriah on the ball.

Q: Why is it always warmer after a football game?
A: All the fans have left.

Q: How do you get out of a locked car if you have nothing but a football?
A: Unlock the door and pull the handle.

Q: Why is a football stadium the coolest place to be?
A: Because it’s full of fans.

Q: Where do football players get their uniforms?
A: New Jersey

Q: What happens to football players who go blind?
A: They become referees.