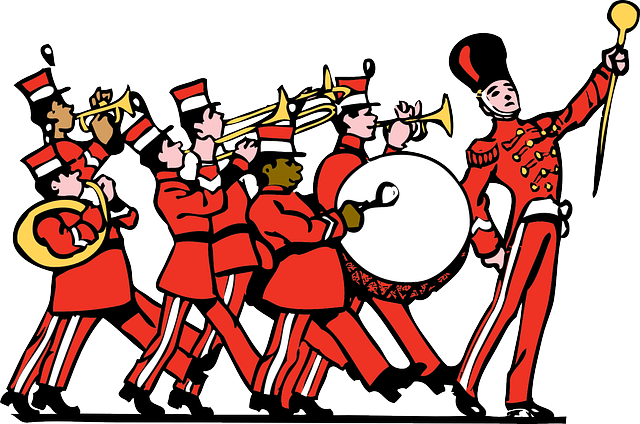 This is the best collection of marching band jokes anywhere – and we will keep adding new jokes whenever we have more to add.

Q: What’s always right above the drum major?
A: The drum Colonel

Q: What 90’s musical group can marching bands relate to?
A: NSync.

Q: What’s the best part of an Autumn marching band competition?
A: The color gourd.

Q: Why don’t they hold marching band competitions in the jungle?
A: Too many cheetahs.

Q: What do carpenters have in common with marching bands?
A: Drill.

Q: Which hockey team do marching band guard members cheer for?
A: Sabers.

Q: Why doesn’t the struggling marching band have a website?
A: They can’t string three W’s together.

Q: What are ten things marching band directors can always count on?
A: Their fingers!

Q: Why was marching band practice so hard?
A: Too many notes.

Q: How are scrambled eggs like a losing marching band?
A: They’re both beaten.

Q: Which marching band musician wears the biggest sneakers?
A: The one with the biggest feet!

Q: What instrument do they only play in Boston marching bands?
A: Red Sox-ophones.

Q: What’s the range of a tuba?
A: About 5 yards if you have a strong enough arm!

Q: How did the marching band fix a broken tuba?
A: With a tuba glue.

Q: Who protects the marching band instruments?
A: The color guard.

Q: Why does the color guard have so much cash?
A: Money hands.

Q: Why was the softball player so good at color guard?
A: She had a grand slam position.

Q: Which horn can send text messages?
A: SousaPHONE.

Q: What gives marching bands their energy?
A: The battery.

Q: What was the cat doing in the marching band?
A: Purr-cussion.

Q: What do talented trumpet players in marching band have in common with pirates?
A: They can both hit the high C’s.

Q: How to trumpet players greet each other at Marching band competitions?
A: “Hello, I’m better than you.”

Q: Why did the marching band director recruit the trumpet playing cow?
A: He was a great moo-sician

Q: What is the longest distance between two points?
A: A parade.

Q: In what month do trumpet players parade the most?
A: March!

Q: What do color guard and naughty football players have in common?
A: They get flagged!

Q: Why was the girl kicked out of color guard?
A: Too much cheater tape.

Q: Why couldn’t the trumpet player perform in the marching band competition?
A: Someone took his notes…

Q: What do you call a band that plays boring songs during parades?
A: A marching bland.

Q: If the tubas stand behind the trumpets, what comes after the tubas?
A: The three-bas.

Q: What kind of cabinet do band directors like most?
A: The lazy sousaphone

Q: Why was the drummer kicked out of marching band?
A: For percussin’

Q: Why does a field get warm after a marching band competition?
A: Because all the fans have left.

Q: Which marching band member can jump higher than the judges table?
A: All of them – a table can’t jump.

Q: Which pack of dogs helps setup for the marching band?
A: A pit bull crew.

Q: What was the only good thing about the lousy marching band playing in Key West?
A: It was the first time they knew what key they were in.

Q: Which marching band instrument is made out of a non-caloric sweetener?
A: Xylitolphone

Q: Why did the skeleton join marching band?
A: To play tromBONE.

I was asked to play the BASS drum, but I felt like there was something FISHY about it.

The percussionists were bragging again… they think their instruments are a status cymbal.

I have a strange numbness in my arm after marching band practice… I think I hit my funny obone. (oboe + bone)

I was trying to count the saxophones in our marching band… looks like we have Tenor so.

We had marching band practice in a farmer’s field again… apparently it’s more convenient for the color ghourd.

Knock knock.
Who’s there?
Mitrom.
Mitrom who?
Mitrombone hit the trumpet player in front of me – oops!

Knock knock.
Who’s there?
Clair.
Clair who?
Clairinet is my favorite instrument!

Knock knock.
Who’s there?
Sue.
Sue who?
Sousaphone so you better answer her!