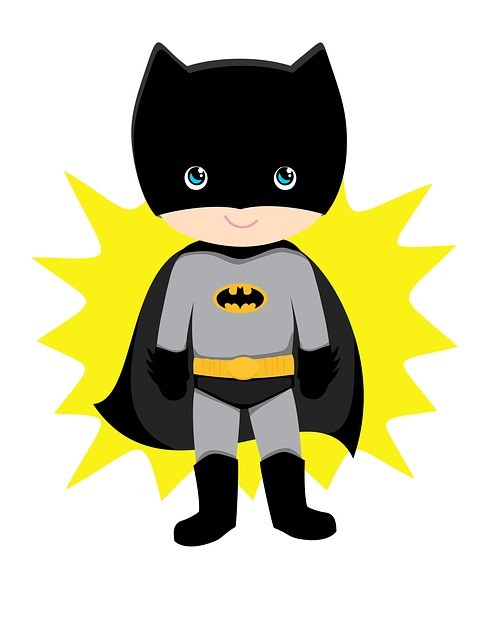 These Batman jokes are clean and safe for kids of all ages. They are great for parents, teachers, babysitters and anyone else looking to share a laugh with the children in their lives.

Other names for Batman include Caped Crusader, Dark Knight and the World’s Greatest Detective – and his real name is Bruce Wayne.

Batman jokes are fun anytime, but especially around Halloween when kids are excited about dressing up as their favorite superhero.

If you really like Batman, or have kids that do, then bookmark this page and check back often because we’ll be adding new jokes to this page. You’ll probably also want to check out our Superhero Jokes collection.

Q: Why did Bruce’s dentist give him mouth wash?
A: Because he had bat breath.

Q: What do you get when you cross Batman with a tree?
A: Spruce Wayne.

Q: How many caped crusaders does it take to change a light-bulb?
A: None – they like it dark.

Q: What do you get when you combine Robin with a milk shake machine?
A: Robin the Boy Blender.

Q: What does Batgirl wear to the superhero ball?
A: Her Dark Knight gown.

Q: Why is Two Face one of the better villains?
A: Because he’s only half bad.

Q: What did Bruce Wayne’s mommy put over his crib?
A: A bat mobile.

Q: What is a Batman’s favorite part of a joke?
A: The punch line.

Q: Why did Robin pick up the telephone?
A: It bat-a-rang.

Q: What does Bruce Wayne give to kids on hot summer days?
A: Batcycles (instead of popsicles)

Q: Why does Batman always win at cards?
A: Because he always get the Joker.

Q: Why couldn’t Batman go fishing?
A: Robin ate all the worms.

Q: Why did all the pictures come out dark from Batman’s party?
A: He forgot to invite the Flash.

Q: Where does Batman go potty?
A: In the batroom.

Q: Why did Batman bring Wonder Woman with him to the used car dealer?
A: So she could use her Lasso of Truth on the salesman.

Q: What does Batman put in his lemonade?
A: Just ice.

Q: Why was Dick Grayson called Robin?
A: Calling him the early bird sounded silly.

Q: What did Robin say to Batman when they finally found the box of tissues?
A: Holy Kleenex – it was right under his nose and we blew it.

Q: Why was Batman so serious?
A: He wasn’t the Joker.

Q: What’s the difference between Batman and the Penguin?
A: Batman can go into a jewelry store without robin.

Q: Why doesn’t Batman like Mr. Freeze?
A: He always gives him the cold shoulder

Q: Why did Batman get upset while playing cards.
A: They kept saying the Joker was wild.

Q: What did Batman say to his friend who returned after missing a day of school?
A: Welcome bat.

Q: Why did Batman’s wife name their son Gotham?
A: So when he wakes up at night, she can wake up Batman and say “Gotham Needs You.”

Q: Which sport is Bruce Wayne really good at?
A: Baseball, because he’s do good with a bat.

Q: What does Bruce Wayne like to eat when it’s cold outside?
A: Alpha-bat soup.

Q: What does Batman do for exercise?
A: Aerobatics.

Q: What did Alfred say when Batman got in trouble?
A: You’re a bat boy.

Q: Why is Batman like false teeth?
A: He comes out at night.

Q: What type of diet did Mr. Freeze go on?
A: The Meltdown Diet

Q: Which farm animal turns into a superhero at night?
A: The sheep – it turns into Baaaaaatman

Q: Why can’t Batman play chess using the white pieces?
A: He always has to be the Dark Knight.