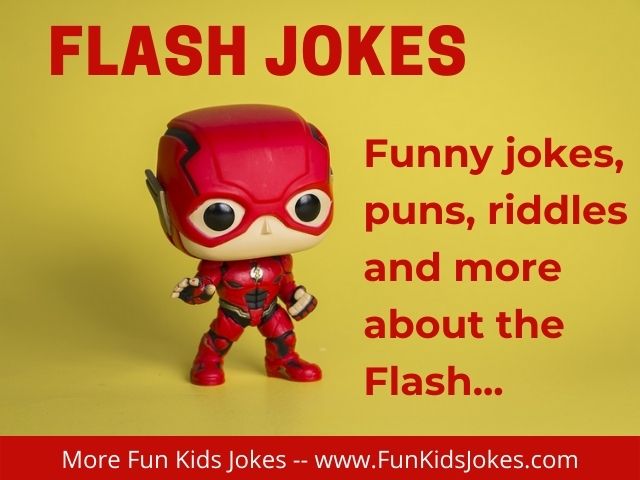 Looking for funny Flash jokes? This is the best collection of jokes about The Flash from DC Comics anywhere – perfect for fans of the Flash comic books, The Flash TV show and all things related to the speedster superhero.

These Flash jokes are clean and safe for children of all ages. They are great for parents, teachers, babysitters, super hero fans and anyone else looking to share some laughs with the kids in their lives. They include Flash one liners, Flash Puns, Flash Riddles, knock-knock flash jokes and more.

Flash jokes are fun anytime, but especially for kids birthday parties and around Halloween when they dress up as the Flash.

If you really like Flash, or have kids that do, then bookmark this page and check back often for new additions. You’ll probably also want to check out our Superhero Jokes collection for Batman Jokes, Ant-Man Jokes and more.

Q: What is The Flash’s favorite TV cartoon series?
A: Speed Racer.

Q: What is faster than the Flash?
A: The Weekend!

Q: What did Luke Skywalker say to the Flash?
A: May the speed force be with you.

Q: Why was Bart Allen’s mom always upset with him?
A: He kept forgetting to flash the toilet.

Q: What is the Flash’s favorite type of flower?
A: The Iris.

Q: What did Barry Allen always remember to bring on camping trips?
A: His Flash light.

Q: How does the Flash screw in a light bulb?
A: He Titans it.

Q: How did the Flash fix his washing machine?
A: He used a Barry Allen wrench.

That Barry Allen sure does dress flashy…

Q: How did the Flash lose weight?
A: He fasted.

Q: Why did the Central City on the Flash for help?
A: There was a Flash flood.

Q: What does Barry Allen wear when he goes out dancing?
A: Something flashy.

Q: Why did the Flash stay home from work?
A: He had a Captain Cold.

Q: Why did the Flash rush back to Central City from his vacation?
A: He heard they were had a Heat Wave coming. (Heat Wave is an enemy of Flash)

Q: Why did the Flash visit Ireland?
A: To catch the Pied Piper.

Q: What is the Flash’s favorite part of a joke?
A: The punch line.

Q: How does The Flash act on his birthday?
A: He’s very animated.

Q: When is the Flash like a politician?
A: When he’s running for something.

Q: What does the Flash wear to the beach?
A: A Speedo.

Q: Why was the Flash such a good pitcher?
A: Nobody could hit his fast ball.

Q: What’s the Flash’s favorite part of Mister Rogers?
A: When there’s a speedy delivery from Mr. McFeely.

Q: What is Wally West’s favorite band?
A: The Dimensions.

Q: How did the Scarlet Speedster get so good at math?
A: He used flash cards.

Q: How do you stop the Flash?
A: Put banana peels everywhere.

Q: What is the Flash’s favorite drink?
A: Kool Aid.

Q: Why did all the pictures come out dark at Superman’s birthday party?
A: They forgot to invite the Flash.

Q: What do the Flash put in his fruit punch?
A: Just ice.

Q: Why is it so easy for the Flash to jump higher than skyscrapers?
A: Because skyscrapers can’t jump.

Q: How do you know when Jay Garrick is coming your way?
A: You’ll see the flashing lights.

Q: Why did Kid Flash stay home from school?
A: He had a bad case of the runs.

Q: Where does Lego Flash live?
A: On the next block.

Q: What does the Flash spend most of his money on?
A: New sneakers!

Q: What does the Flash like about summer nights?
A: The lightning bugs.

Q: What does Barry Allen do when a camera points his way?
A: Flashes his teeth.

Q: When does Iris West like to go shopping?
A: When there’s a Flash sale.

Q: Why was the Flash late for work?
A: He was fast asleep and didn’t wake up.