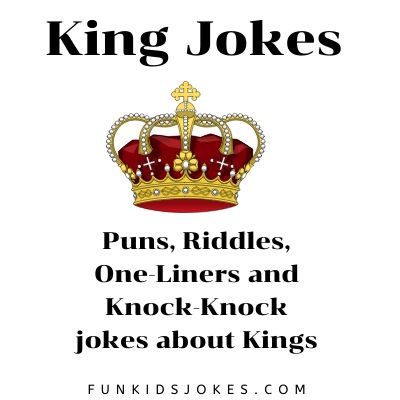 Funny King jokes, puns, riddles, one-liners and knock-knock jokes that are sure to get some smiles.

Great for Medieval fans, parents, teachers and kids of all ages.

These jokes about Kings also include dragons, knights and more.

These jokes would be funny for any royalty-themed party or Medieval style dinner or event.

Once you’re done with this page, make sure you check out these related collections: Dragon Jokes, Knight Jokes, Wizard Jokes, Witch Jokes and Harry Potter jokes.

Q: What was the nickname for da King who wanted everything?
A: DeSire…

Q: What the most frustrating thing for dragons when Kings threw them birthday parties?
A: Blowing out the candles…

Q: Who was strong enough to move the king’s castle?
A: A chess player.

Q: Who designed King Arthur’s round table?
A: Sir Cumference.

Q: Who was the biggest member of the royal family?
A: King King.

Q: Why was the king wet?
A: He was the reigning monarch.

Q: Why did the king have a round table?
A: So he wouldn’t be cornered.

Q: What did the King name the extra night?
A: Sir Plus.

Q: How did Medieval kings send messages in the forest?
A: Moss code.

Q: Why did the King go to the bank after dinner?
A: To make his knightly deposit.

Q: Where do kings get crowned?
A: On their heads.

Q: Which of the king’s knights never doubted himself?
A: Sir Tanlee.

Q: Why did king Arthur go to the dentist?
A: To get his teeth crowned.

Q: Why were there so many old chairs in the King’s castle?
A: They were never throne out.

Q: Where does royalty go out to eat?
A: Burger King.

Q: Who was the roundest knight at King Arthur’s table?
A: Sir Cumference

Q: Why was the King’s army so tired?
A: Too many sleepless knights.