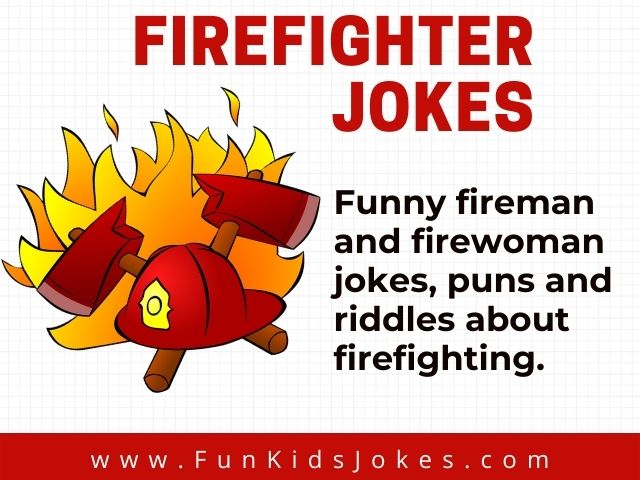 Firefighter jokes, riddles and puns for kids and adults of all ages.

Clean jokes about firemen, firewomen and fire fighting. These jokes are funny for parents, children, teachers, emergency pesonnel and firefighters.

These firefighter jokes are popular year round, but especially around Halloween as children like to dress up as a fireman or firewoman.

If you have a youngster interested in fighting fires and fire trucks, then share these jokes for a few laughs. You can also share the fact that Benjamin Franklin founded the first volunteer fire company in America in 1736 (in Philadelphia, PA).

Some other famous Americans who were firefighters were George Washington, Alexander Hamilton, John Hancock, Samuel Adams and Paul Revere. The first known female firefighter was Molly Williams in 1818.

In the United States, there are approximately 1,216,600 firefighters serving in 27,228 fire departments. A fire department responds to a fire every 23 seconds throughout the United States according to NFPA. The Fire Department of the City of New York (FDNY) is the largest Fire Department in the US. If you happen to see a firefighter, please let them know how much you appreciate their service.

We hope you enjoy our collection of the best firefighter jokes!

Q: What do firefighters surf with?
A: Firefox. (Mozilla Firefox is a web browser)

Q: What did the fireman say when the church caught fire?
A: Holy smokes!

Q: What did they call Bob the firefighter?
A: Bob…

Q: Why did the fireman wear suspenders?
A: To keep his pants up.

Q: Why are the fires in Athens worse than those in the United States?
A: Because you can’t throw water on a Greece fire.

Q: Why did the firefighter wear his gear out to dinner?
A: Just in case the sauce on taco Tuesday was too fiery.

Q: What comes after a dragon lights his birthday candles?
A: The fire department…

Q. What happened to the firefighter the 3rd time he was late to work?
A: He got fired.

Q: What kind of ears do pumpers have?
A: Engineers. (Pumper is another name for a fire engine that pumps water)

Q. Why did the moth want to be a fireman?
A: Because it was drawn to alight.

Q: Why are so many firefighters optimistic?
A: They’re used to looking at the bright side.

Q: How many firemen does it take to change a light bulb?
A: It takes four. Three to cut a hole in the roof and one to change out the bulb.

Q: What do fire fighters like with their cheese?
A: FireCRACKERS.

The Fire Chief searched for “what causes fires” on Google… He got about 80,000 matches.

Q: Why was the firefighter always carrying a calendar with him?
A: Just in case he had to save the day.

Q: Did you hear about the fire at the circus?
A: It was pretty in-tents.

Q: What sound do you hear when dragons sneeze?
A: A fire alarm.

Q: Why couldn’t the firemen save the bakery?
A: It was already toast when they got there.

Q: Which superhero was the fire department always trying to recruit?
A: Aquaman.

Q: How did the contact the fire department about a fire?
A: He used a hotline.

Q: How could the firefighters tell that their new chief was going to be stubborn?
A: He whistled “Hail to the Chief” whenever he walked into a room.

I got yelled at by the fire chief today… that guy is such a HOT head.

Q: Why do fire departments have Dalmatians?
A: They help them find the hydrants.

A fire broke out at a cold-medicine factory on the outskirts of town… thankfully, there was no congestion on the way.

Q: Why did the rookie fireman bring a credit card to his first day?
A: He was told he would have to charge a hose. (“charge a hose” is the term for filling a hose with water)

Q: Why are elephants such good firefighters?
A: They carry their own hose and can stomp out fires.

Q: Who rides a horse to every fire call?
A: The fire MARSHALL.

Q: How are people like fires?
A: They both need oxygen to survive!

Q: Why was it taking so long for the fire fighters to get to the strawberry farm?
A: There was a traffic JAM.

Q: Why did the rookie bring his bowling ball to the fire station?
A: He heard there was a strike team.

An ice cream truck spilled on the highway… the rocky road really held up emergency responders.

Q: What sports team do firefighters root against?
A: Portland Trail BLAZERS.

Q: Why do they weigh fire fighters every day?
A: So they know what weight class they should be in. (boxers are classed by their weight before fights)

I don’t understand how firefighters can trust a ladder… they’re always up to something.

Q: How did the firefighter find the fire?
A: He used a fire distinguisher.

Q: Why are there no picnic baskets at fire stations?
A: Smokey the Bear always walks off with them.

Q: Why did the fireman bring a ladder to the restaurant?
A: He heard that drink refills were on the house.

Q: When are firefighters best at getting out of the fire station quickly in the middle of the night?
A: When they are FAST asleep.

Q: What did the directions to the fire department ladder say?
A: Step 1, Step 2, Step 3…

The fire chief tried to pickup new fire hydrants, but she wasn’t allowed to park anywhere near the factory…

Q: Why did the firemen need ear plugs to fight a fire at the tennis equipment factory?
A: It was known for the racket it made. (Racket is another way to say something is loud).

Q: What bugs fire fighters during the summer months?
A: Fire flies.