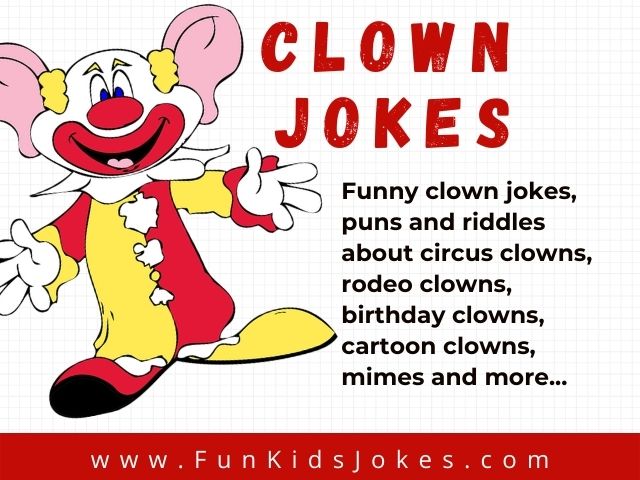 Clown humor is funny anytime, but especially for birthday parties, when visiting a circus, and around Halloween when children like to dress up as clowns and jokers (we also have Halloween Jokes) .

If you’re planning on having a birthday party that involves clowns or has a clown theme, then these jokes are perfect.

If you’re making cupcakes for a clown party, then you can make little flags as toppers and write a clown joke on each one. Guests can tell a joke before they eat their cupcake!

Here are 12 fictional clowns that children may know from stories and shows:

Q: Why was the movie “Nemo” so funny?
A: It starred a clown fish.

Q: What do Winnie the Pooh and Bozo the Clown have in common?
A: Their middle name (The).

Q: What did Robin say when the Joker lets him go?
A: What a nice JESTure.

Q: What drink does The Joker dislike most?
A: Socie-tea!

Q: What happened when the lion ate the circus clown?
A: He felt funny.

Q: What candy do clowns like the most?
A: Rollo’s (Rollo is the clown from “Out of the Inkwel” and the name of a candy)

Q: Why did the birthday clown get in trouble with the law?
A: For BLOWING UP balloons.

Q: Why did Bozo get sent to the principal’s office?
A: He was always clowning around in class…

Q: Why did the clown cross the road?
A: To get to the rubber chicken.

Q. What did the circus lion call the clown?
A: A happy meal.

Q: Why was the clown always on his feet?
A: He was a stand-up comedian.

Q: Why did the clown visit the doctor?
A: He was feeling funny.

Q: What do clowns order for breakfast?
A: Funny side up eggs.

The circus needed to hire a clown to shoot from a cannon… but they couldn’t find someone of the right caliber.

A clown told me his neck hurt… i’m thinking he just slept funny.

I was going to become a clown like my father… but he had big shoes to fill.

I moved into a new house and the clown next door gave me a house plant. I thought it was a nice jester.

My doctor’s a clown. Every time I see him, he tells me that laughter is the best medicine.

I just went to see a clown jump 50 feet into a barrel of water… It was in tents.

Q. What happened when Tigger ate the clown fish?
A. He felt funny in his tummy.

Q: How did the clown arrive to the monster circus?
A: Riding a cycle-ops.

Q: Why did the clown wear horns on his shoes?
A: To keep his feet from falling asleep.

Q: Who is the richest clown in the world?
A: Jeff Bozos. (Jeff Bezos owns Amazon.com)

Q: What’s the difference between a healthy bunny and a clown bunny?
A: One is a fit bunny and the other is a bit funny.

Q: What material did the seamstress use to make the clown’s suit?
A: Poly-jester.

Q: How can you tell if a clown is a vampire?
A: He goes for your juggler.

Q: If Optimus were a type of clown, what would he be called?
A: Optimus Mime.

Q: What did the clown say to Harry Potter when he wouldn’t smile?
A: Why so Sirius?

Q: What did the child say when the clown tried to take his balloon?
A: No, it’s MIME!

Q: Which cartoon is a favorite among clowns?
A: Family Circus.

Q: Where did the Joker work as a teenager?
A: Jack in the Box. (The Joker’s real name is Jack Napier. Jack in the Box is a toy with a clown that pops out and it is also the name of a fast food restaurant).

Apparently an innocent mime was sent to jail… he had a tough time defending himself at the HEARING.

Did you hear about the fire at the circus? The flames were in-tents.

The circus needed to hire a clown to shoot from a cannon… but they couldn’t find someone of the right caliber.

A clown told me his neck hurt… I’m thinking he just slept funny.

I was going to become a clown like my father… but he had big shoes to fill.

When I was a kid, I always looked up to the clowns that were on stilts…

I moved into a new house and the clown next door gave me a house plant. I thought it was a nice jester.

My doctor’s a clown. Every time I see him, he tells me that laughter is the best medicine.

Q: What happened when Snoopy went to the clown’s flea circus?
A: He stole the show.

Q: Why did the clown join the Big Apple Circus?
A: It loved all the apple-ause.

Q: Where are clowns shoes made?
A: Honk-konk.

Q: Who helped the circus clown get around in the dark?
A: The acro-bats.

Q: Where does the Cat in the Hat perform?
A: At the Circus McGurkus

Q: What was the vampire looking for at the circus?
A: The Jugular. (Clowns are “Jugglers” but “Jugular” is in your neck)

Q: Why was the baby Jon chasing the clown?
A: It was his Binky. (Binky is the clown from Garfield)

Q: What did the teacher say when Flint Rasmussen the rodeo clown disrupted class?
A: Quit horsing around!

Q: Why was the rodeo clown late to the show?
A: He spent too much time in the can.

Q: Why is Frankenstein such a good rodeo clown?
A: He can put you in stitches.

Q: Are rodeo clowns funny?
A: They’re a barrel of laughs!

Q: What song is perfect for rodeo clowns?
A: Danger Zone.

The clown was complaining about being tired all the time… maybe he’s juggling too many things.

A clown just had his taxes audited… probably due to some funny business.

The circus clown also used to work on the trapeze… until he was let go.