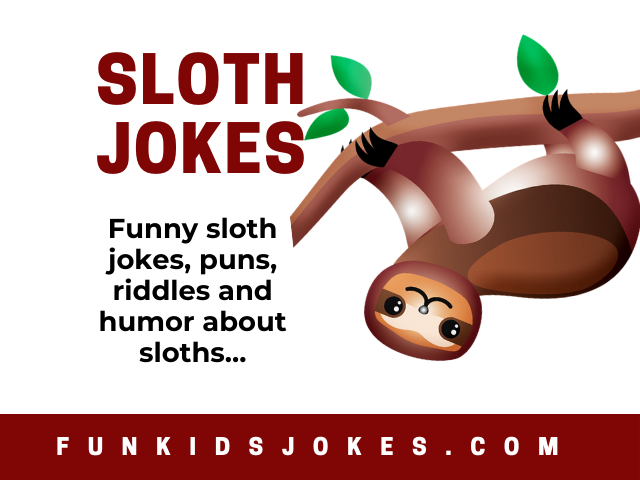 All of these clean sloth jokes are family-friendly for children and adults of all ages.

If you’re looking for jokes about sloths, then this collection of funny sloth jokes is for you!

These jokes about sloths are perfect for teachers, parents, zoo keepers, kids, veterinarians, animal lovers, Ice Age (the movie) fans and anyone who is interested in the sloth.

There are also popular sloth characters in movies and TV shows. “Zootopia” featured Flash Slothmore and Priscilla Tripletoe. “Ice Age” featured Sid the Sloth and Brooke. “The Croods” featured Belt the Sloth. “It’s a Big, Big World” featured Snook the Sloth. Tony is a Sloth appeared in “The Jungle Bunch” and some Pokemon based on sloths include Sakoth, Vigoroth and Slaking.

We’re adding funny sloth jokes all the time, so bookmark this page and check back for new additions. You may also enjoy our other collections of animal jokes, including Cow Jokes, Sheep Jokes, Chicken Jokes, Pig Jokes and Horse Jokes.

Q: What happens when you cross a pig with a sloth?
A: You end up with a slowpork.

Q: What do you call an early modern sloth?
A: A slo-mo sapien.

Q: What Hogwarts house are sloths sent to?
A: Slotherin House.

Q: What did the cow say to the sloth in front of him?
A: Get a moove on.

Q: Why was the sloth laying in the snow?
A: It was making a slow angel.

Q: Why was Lucy so angry with her brother?
A: Linnaeus’s two-toed sloth was hanging from her bedroom ceiling!

Q: What happens when you cross a sloth with a porcupine?
A: You get a slowpoke.

Q: Why couldn’t the girl find something to where to school?
A: The only things hanging in her closet were sloths.

Q: How did the sloth chef cook his chili?
A: With a slow cooker.

Q: What do sloths do at their prom?
A: Slow dance.

Q: What was the sloth doing on the road?
A: Holding up traffic.

Q: What do you call a sloth who can hang from a limb for 24 hours straight?
A: A slow-off.

Q: What do you get when you cross a sloth with two frogs?
A: A two-toad sloth.

Q: What do you get when you cross a cat with a sloth?
A: A slow leopard.

Q: What do sloths do after a snow storm?
A: They throw slow balls at each other.

Q: What do you say to a sloth who wants to quit?
A: Hang it there!

Q: Why was the sloth flat?
A: Manny the elephant stepped on him!

Sloths always get home late… they lose track of time when their hanging out.

The post office was having trouble finding enough mail carriers for the holidays. Apparently, it takes time to fly sloths in from other countries.

Sloths have a pretty healthy diet since they don’t eat fast food.

Knock Knock
Who’s there?
Annie.
Annie who?
Annie one know how to get a sloth to come down from a tree?