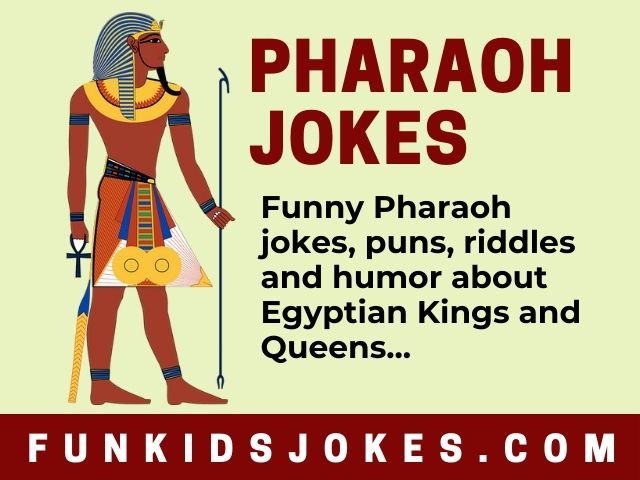 These Pharaoh jokes are great for parents, teachers, Halloween parties, history teachers, museum guides, anthropologists and anyone interested in Egyptian history and Egyptian Pharaohs. Some common ways Pharaoh is spelled incorrectly include pharoah and pharoa.

A pharaoh was a King or Queen of Egypt. They were the most powerful person in the kingdom. Pharaohs could be either men or women. Egyptians considered pharaohs to be a half-human, half-god.

Pharaohs in Egypt usually were mummified and buried in elaborate tombs, so pharaohs because mummies!

We hope you enjoy these funny Pharaoh jokes for kids and adults of all ages!

Q: Why was the Pharaoh boastful?
A: Because he Sphinx he’s the best.

Q: When is a Pharaoh like a piece of wood?
A: When he’s a ruler.

Q: What was the most important holiday in ancient Egypt?
A: Mummy’s Day.

Q: Why was the Pharaoh wet?
A: He was the reigning ruler.

Q: How did the Pharaoh defeat Superman?
A: With CRYPT-onite.

Q: What did the young Pharaoh say when it got frightened?
A: Where’s my mummy!!

Q: What subject did the Pharaoh study in college?
A: Cryptography.

Q: Why didn’t Cleopatra go to the psychiatrist?
A: Because she was the Queen of Denial.

Q: How did the Pharaoh get to school?
A: In Anubis.

Q: How come nobody knew that the Archeologist found a mummy?.
A: She kept it under wraps.

Q: What kind of music did pharaohs like most?
A: Wrap music.

Q: What is it called when a Pharaoh is lying in the wrong pyramid?
A: A grave mistake.

Q: How did the pharaoh get so rich?
A: CRYPTO-currency…

Q: Which Egyptian Pharaoh played the trumpet?
A: Tootin’khamun.

The pharaoh was stiff and sore from too much exercise, so he called his CAIRO-practor…

Q: How do Super Pharaohs communicate?
A: In HERO-glyphics.

Q: Why was Cleopatra worried about getting home from school?
A: She didn’t want her mummy to see her report card.

Q: What do you say when a pharaoh doesn’t pay you?
A: Egypted me! (He jipped me)

Q: What brand of underwear do pharaohs wear?
A: Fruit of the Tomb.

Q: Which pretty actress was an ancient Egyptian favorite?
A: Pharaoh Fawcett

Q: Why didn’t the pharaoh think he was wrong?
A: He was in De-Nile (the Nile / Denial)

Q: What did Ramses say when he walked into the public restroom?
A: What sphinx in here?

Q: Why was young Tutankhamun home from school?
A: He caught a gold.

Q: What was the pharaoh’s favorite football team?
A: The Mummy Dolphins

Q: Why were the two gassy archeologists such good friends?
A: They had loud toots-in-common.

Q: What was Cleopatra’s favorite type of flower?
A: Chrysantha-mummies.

Knock Knock.
Who’s there?
Archie.
Archie who?
Archie-ologist looking for a pharaoh’s tomb.

Q: What do you get when you cross an Egyptian pharaoh with a mechanic?
A: Toot and Car Man.

Q: Why couldn’t the Pharaoh sing?
A: He hurt his larSphinx. (larynx)

Q: What did the Pharaoh do when he needed help moving his gold?
A: He hired-a-glyphics.

Q: How did the Pharaoh Hatshepsut know it was time to retire?
A: He saw the writing on the wall.

Q: Why was the Pharaoh Khufu sent to jail?
A: He ran a pyramid scheme…

Q: Why didn’t the Pharaoh know where he was?
A: He skipped history class.

These Pharaoh Puns are Sand-Tastic!

Q: What was the favorite restaurant of the Pharaohs?
A: Pizza Tut.

Q: Why did the pharaoh have to go to the dentist?
A: Egypt a tooth.