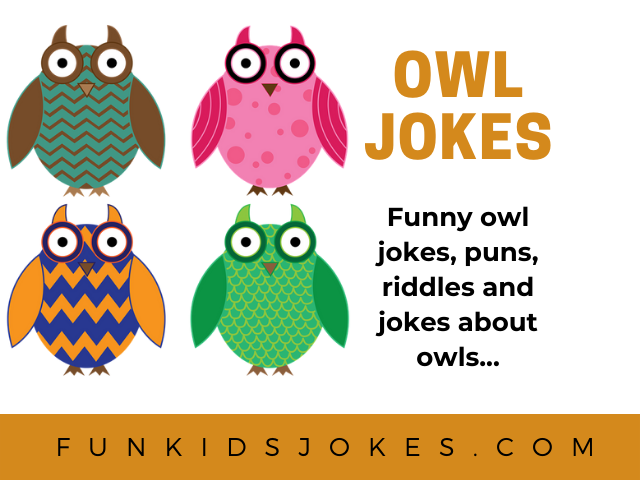 Owl jokes for kids, including owl puns, riddles and knock-knock jokes about owls.

These clean owl jokes are great for parents, science teachers, biologists, orinthologists, bird watchers and anyone interested in owls or birds of prey.

We hope you enjoy these funny owl jokes for kids and adults of all ages!

Q: Who governs owls in the United Kingdom?
A: Parliament (A group of owls is called a parliament)

Q: Which holiday do owls love most?
A: OWL-oween.

Q: Where do owls go to buy discounted clothing?
A: To owlet malls.

Q: What type of books do owls like most?
A: Hoo-dunit books.

Q: Why did the owl cross the road?
A: It was the chicken’s day off.

Q: Which American owl is a senior citizen?
A: Great GRAY Owl

Q: Which owl uses the most force?
A: Owli-wan-kenobi.

Q: Which type of owl would you find at the North Pole?
A: ELF Owls.

Q. What do you call an owl after you find it in a look-n-find book?
A: A spotted owl.

Q: What’s the perfect job for an owl?
A: Night guard (owls are nocturnal – active at night)

Q: What did the owl order at the ice cream shoppe?
A: A HOOT-beer float.

Q: What’s the most popular book in the owl library?
A: Horton Hears a Hoot.

Q: Which type of owl might be mistaken for a rabbit?
A: The Long-eared Owl

Q: Who was the most famous boxing bird in history?
A: Muhammad OWLEE.

Q: Which rock band is a favorite among owls?
A: The Hoo.

Q: Why did the owl have a dinner party?
A: She didn’t want to be owl by herself.

Q: What is more amazing than a talking owl?
A: A spelling bee.

Q: Where did they put the most criminal owls?
A: Owlcatraz.

Q: What do you get if you cross a kitten and an owl?
A: Meowls.

Q: What did the owl say to his sweetheart?
A: You’re hootiful.

Q: What did the young owl say to his mother about the broken window?
A: I’m talon you mama, it wasn’t me.

My neighbor says he’s an orinthologist… he acts like a know-it-owl.

Q: What was the Great Gray Owl’s favorite school subject?
A: Owlgebra.

Q: Why didn’t the owl study for the test?
A: He preferred to wing it.

I went to a barn owl’s party the other night. It was a real hoot.

Q: How can you tell when an owl is angry?
A: By the scowl…

Q: What do you get when you cross a wise owl and an oyster?
A: Great pearls of wisdom.

Q: Why do they say about baby owls taking after their dads?
A: Like feather, like son.

Two Peruvian owls tried to rob me the other night… Luckily I realized they were Inca hoots.

Q: How can you tell when an owl has laryngitis.
A: It doesn’t give a hoot.

Q: Who was the most famous owl magician?
A: Hooo-dini.

Q: Why was the owl dressed in shining armor?
A: It was a knight owl.

Knock knock.
Who’s there?
Ty.
Ty who?
Tyto is a genus of birds including true barn owls…

Knock, knock.
Who’s there?
Owls.
Owls who?
Yes they do.

Knock, knock.
Who’s there?
Owl.
Owl who?
Owl be seeing you soon.