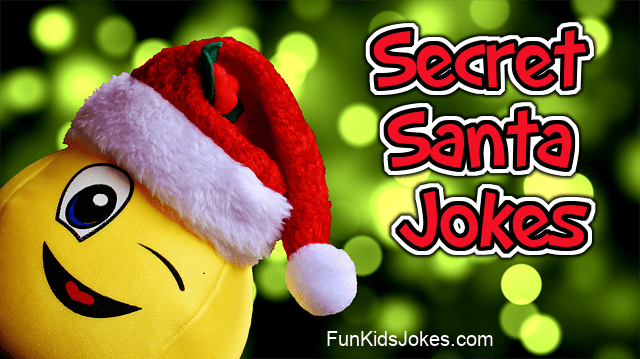 What is a secret Santa? According to Wikipedia, Secret Santa is a Christmas tradition in which members of a group or community are randomly assigned a person to whom they give a gift. The identity of the gift-giver may or may not be revealed.

These are all clean Secret Santa jokes, so they are safe for kids and all ages and settings.

Q: What did the women listen to while packing her Secret Santa gift?
A: Wrap.

Q: How did Darth Vader know what he was getting from his Secret Santa for Christmas?
A: He felt his presents.

Q: What’s the best Secret Santa present?
A: A broken drum – you just can’t beat it.

Q: What’s the least expensive thing with Diamonds that a Secret Santa can give?
A: A deck of cards.

Q: Why are Secret Santa gifts so cheap?
A: They are no-name brands.

Q: How many presents can Secret Santa fit in an empty sack?
A: Only one – after that it’s not empty any more

Girl: Who gave you your Secret Santa gift?
Boy: I think it was Ann-Onymous…

Q: How did the Secret Santa know what to get his co-worker?
A: He had a gift…

Q: What Secret Santa gift has a lot of meaning?
A: A dictionary.

Q: Who anonymously gave a gift to Luke Skywalker at the Christmas party?
A: Secret Jedi

Q: What is it called when someone has to wait for their anonymous Christmas gift?
A: Secret Santa Pause

Q: Why did the Secret Santa eat so many cookies?
A: Be-Claus she likes them!

Q: What type of potato chip should be served at a Secret Santa party?
A: Crisp Pringles