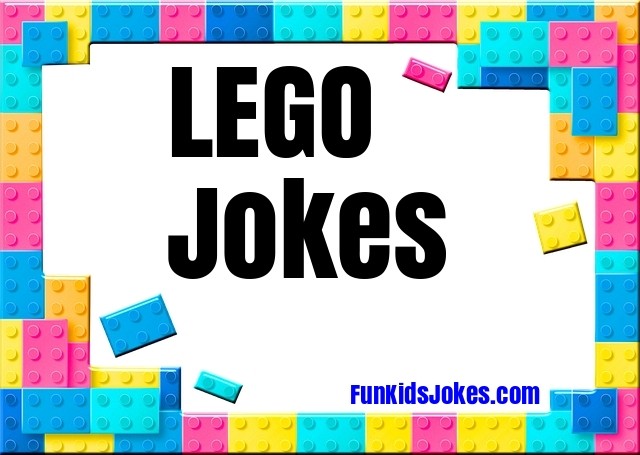 LEGO jokes are funny for kids and adults! Everyone loves playing with LEGO ® bricks and everyone will laugh at the LEGO jokes.

LEGO, or Legos, are small plastic bricks that can be interlocked to build things. The Lego Company was founded in 1932.

These LEGO jokes would be great for a LEGO Party! Here are some ideas:

There are so many fun things you can do with these jokes about LEGOS – but best of all, you can laugh at them!

Q: What’s the best way to get a robber to leave your house?
A: Put LEGO bricks all over the floor.

Q: What did the small battery scream out after it stepped on a LEGO?
A: AAA!

Q: What do you say to get a LEGO ninja to leave the room?
A: Ninjago!

Q: What dance do LEGO people like most?
A: Square dancing

Q: What time is it when an elephant steps on your LEGO creation?
A: Time to build another one!

Q: Why should you never pick a LEGO person for your basketball team?
A: They always throw up bricks.

Q: What was the LEGO pirate’s favorite letter?
A: Arrrrrrrr!

Q: Why was the LEGO person go to the doctor?
A: His nose was BLOCKED-up.

Q: What’s the scariest thing to a LEGO?
A: The vacuum cleaner

Q: Why was grandpa so happy when he finished the LEGO set?
A: The box said 5-12 years, but he got it done in 3 weeks…

Q: What did my doctor say to do after I stepped on a LEGO?
A: Just block out the pain…

Q: Why couldn’t the detective solve the LEGO crime?
A: He just couldn’t put the pieces together…

Q: What do they do every year in the LEGO neighborhood?
A: They have a block party.

Q: How do LEGO minifigures measure distance?
A: In square feet.

My dad wanted to put my brick toys out for the garage sale, but I just couldn’t LEGO…

Q: How does an Eskimo build a strong LEGO house?
A: Igloos it together!

Q: Where do LEGO ninjas buy their groceries?
A: A stealth food store

Knock, knock.
Who’s there?
Bill.
Bill who?
Build me something with LEGOS!

Knock, knock.
Who’s there?
Bay.
Bay who?
Base plate please!

Knock Knock
Who’s there?
Icy.
Icy who?
Icy you like LEGO.

Knock, knock.
Who’s there?
LEGO.
LEGO who?
LEGO the door knob and let me in.