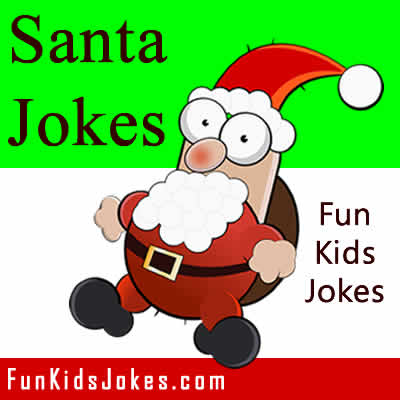 Funny Santa jokes for kids and the entire family. These clean Santa jokes include Santa Claus puns, riddles, knock-knock jokes, one-liners and more. If you’re looking for the best Santa Claus jokes, then you found the right place!

This collection of jokes about Santa is great for teachers, parents, kids and anyone that wants to share Santa Claus jokes and riddles.

This entire page is dedicated to clean Santa jokes that are safe for kids and family-friendly. We’re also including jokes about some of Santa’s helpers, such as elves and reindeer.

Do you know some of the names that Santa Claus goes by? They include Saint Nicholas, Saint Nick, Father Christmas, Kris Kringle, Santy — and just Santa.

Q: Who delivers Christmas presents to elephants?
A: Elephanta Claus

Q: What do you call Santa if he goes down a lit chimney?
A: Crisp Cringle

Q: How many presents can Santa fit in an empty sack?
A: Only one – after that it’s not empty any more

Q: Why is Santa so jolly?
A: Because he knows where all the toys are!

Q: Who delivers Christmas presents to cats?
A: Santa Claws

Q: What was the elf allergic to?
A: Sh-ELF-ish

Q: What do you call a greedy elf?
A: Elfish

Q: What did the lion at the beach have in common with Christmas?
A: Sandy claws

Q: What does Santa suffer from when he gets stuck in a chimney?
A: Santa Claustrophobia

Q: Why does Santa do in his garden?
A: He hoe hoe hoes

Q: What do reindeer have that no other animals have?
A: Baby reindeer!

Q: Who delivers Christmas presents to dogs?
A: Santa Paws

Q: What do you call people who are afraid of Santa Claus?
A: Claus-trophobic

Q: What type of potato chip is Santa’s favorite?
A: Crisp Pringles

Q: What is Santa’s dog named?
A: Santa Paws

Q: What do you call Santa Claus when he doesn’t move?
A: Santa Pause

Q: What kind of music do elves listen to?
A: Wrap

Q: Who delivers Christmas presents to sharks?
A: Santa Jaws

Q: What did Santa Claus yell as he ran for the elevator?
A: Ho ho hold the door!

Q. Which of Santa’s reindeer has bad manners?
A. RUDE-olph

Q. What is green, white, and red all over?
A. A sunburned elf

Q: Why do reindeer tell such good stories?
A: Because they all have tails

Q: How do you make a slow reindeer fast?
A: You don’t feed it

Q: Why is Santa so jolly?
A: Because he knows where all the toys are!

Q: Where do you find reindeer?
A: Depends where you left them

Q: What did the cow say to the reindeer?
A: Moo

Q: What did the reindeer sing to Santa on his birthday?
A: Freeze a jolly good fellow

Q: When should you feed reindeer milk to a baby?
A: When it’s a baby reindeer

Q: Which reindeer have the shortest legs?
A: The smallest ones

Q: If a reindeer lost his tail, where would it go for a new one?
A: A retail shop

Q: What did the cat say to the reindeer?
A: Meow

Q: What did the dog say to the reindeer?
A: Woof, woof.

Q: What do you call it when Santa takes a break from delivering presents?
A: Santa pause

Q: What do you get when you cross Father Christmas with Sherlock Holmes?
A: Santa Clues

Q: What’s red and white and falls down a lot?
A: Santa Klutz.

Q: What does Mrs. Claus sing to Santa on his birthday?
A: Freeze a jolly good fellow.

Q: How does Santa smell?
A: With his nose.

Q: Where does Santa stay when he’s on holiday?
A: At a Ho-ho-tel.

Q: How does Kris Kringle take pictures?
A: With his North Pole-aroid.

Q: What is the wettest animal at the North Pole?
A: The rain-deer

Q: What is Santa’s favorite Olympic event?
A: North Pole-vault

Q. What rains at the North Pole?
A. Reindeer

Q: Where does Santa go to vote?
The North Poll.

Q: What do you call Santa when he has no change in his pocket?
A: Saint Nickel-less.

Q: What does Santa like to get when he goes to the donut shop?
A: A jolly roll.

Q: Why does Santa eat so many cookies?
A: Be-Claus he likes them!

Q: What does Santa like to have for breakfast?
A: Mistle-toast.

Q: What kind of motorcycle does Kris Kringle ride?
A: A Holly Davidson.

Q: What do elves call it when Santa claps his hands at the end of a play?
A: Santapplause.

Q: What do you get if you cross Santa with a duck?
A: A Christmas Quacker.

Q: What would you call Santa if he became a detective?
A: Santa Clues.

Q: Why does Santa always go down the chimney?
A: Because it soots him.

Q: Where does Mrs. Claus keep Santa’s suit?
A: In their Clauset.