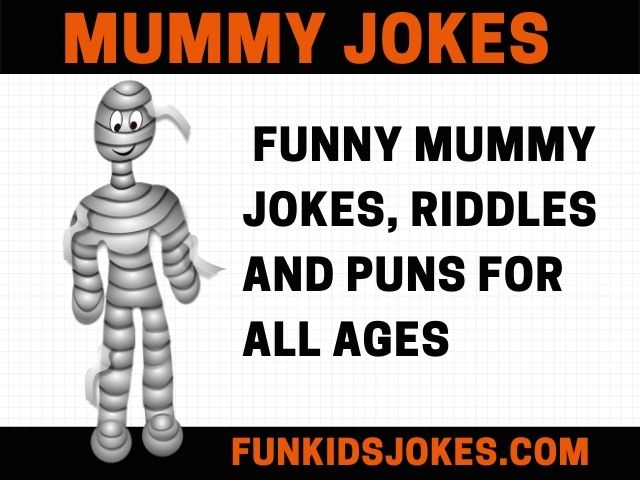 Looking for mummy jokes? Check out this great collection of jokes about mummies! Funny for Halloween or anytime.

These mummy jokes are perfect for parents, teachers, Halloween parties, history teachers, museum guides and kids of all ages.

Mummies can be a bit scary, but these jokes are not.

Q: What is the most important day in Egypt?
A: Mummy’s Day.

Q: How can you tell if a mummy has a horrible cold?
A: By his deep, loud coffin.

Q: How did the mummy defeat Superman?
A: With cryptonite.

Q: What did the young pyramid say when it got scared?
A: Where’s my mummy!!

Q: What subject did the mummy study in college?
A: Cryptography.

I think mummy jokes get a bad wrap…

Q: How did the pharoah get to school?
A: In Anubis.

Q: How come nobody knew that the Archeologist found a mummy?.
A: She kept it under wraps.

Q: What kind of makeup do mummies wear?
A: Mas-scare-a

Q: What kind of roads do mummies like living on?
A: Dead Ends.

Q: What tops off a mummy’s ice cream sundae?
A: Whipped scream.

Q: Why couldn’t the mummy go to school with the witch?
A: He couldn’t spell.

Q: Which mummy lives in Town Hall?
A: The night-mayor.

Q: What kind of music do mummies like most?
A: Wrap music.

Q: How did the mummy learn to cook?
A: He ordered “Cooking for Mummies” from Amazon.

Q: What was the mummy musician’s favorite note?
A: The dead sea

Q: What is it called when a Pharaoh is lying in the wrong pyramid?
A: A grave mistake.

Q: How did the mummy get so rich?
A: Cryptocurrency…

Q: Which Egyptian Pharaoh played the trumpet?
A: Tootin’khamun.

The mummy was really stiff and sore when it awoke, so he called his Cairo-practor…

Q: How do Super Pharaohs communicate?
A: In hero-glyphics.

Q: What did the mummy use to make his Halloween costume?
A: Masking tape…

Q: What was the mummy’s favorite kind of drink?
A: De-coffin-ated coffee.

Q: Why was Cleopatra worried about getting home from school?
A: He didn’t want her mummy to see her report card.

Q: What do mummies put in their hair?
A: Scare spray

Q: What do you say when a mummy over charges you?
A: Egypted me. (He jipped me)

Q: What was the mummy’s favorite dessert?
A: Ice-Scream.

Q: How do mummies tell their future?
A: They read their horror-scope.

Q: What job do mummies do during the holidays?
A: They’re gift wrappers.

Q: What kind of underwear do mummies wear?
A: Fruit of the Tomb.

Q: Which pretty actress was the mummy’s favorite?
A: Pharaoh Fawcett

Q: Who did the mummy take to the prom?
A: His ghoul friend

Q: Why was the mummy so tense?
A: He was all wound up.

Q: Why didn’t the mummy think he was scary?
A: He was in denial (the Nile)

Q: What did the mummy say when he smelled rotten eggs?
A: What sphinx in here?

Q: Where do baby mummies stay during the day?
A: Day-scare

Q: What was the mummy’s favorite party game?
A: Hide-and-go-shriek

Q: Why don’t mummies take up hobbies?
A: They are too wrapped up in their work.

Q: Why do mummies make such great spies?
A: They’re good at keeping things under wraps.

Q: How do mummies stay hidden?
A: By wearing masking tape.

Q: Why was the mummy home from school?
A: He caught a gold.

Q: What was the mummy’s favorite football team?
A: The Mummy Dolphins

Q: Why were the two gassy mummies such good friends?
A: They had loud toots-in-common.

Q: What do mummies like to order for lunch?
A: Chicken Wraps.

Q: What was the mummy’s favorite rock band?
A: The Grateful Dead.

Q: What are a mummy’s favorite flower?
A: Chrysanthamummies.

Q: Why did the mummy visit the vampire?
A: He wanted to borrow his coffin.

Q: Why did the mummy go to the dance?
A: To see the boogie man.

Knock Knock.
Who’s there?
Mum.
Mum who?
Mummy, that’s who!

Q: What do you get when you cross an Egyptian mummy with a mechanic?
A: Toot and Car Man.

Q: Why didn’t Dracula go to the movie?
A: His mummy wouldn’t let him.

Q: Why do mummies have trouble making friends?
A: They’re too wrapped up in themselves.

Q: What do mummies drink when they’re thirsty?
A: Ghoul-aid.

Q: What card game do they play in Egypt?
A: Gin Mummy.

Q: Where do mummies go for a beach vacation?
A: The dead sea.

Q: Why couldn’t the mummy sing?
A: He hurt his larSphinx. (larynx)

Q: What did the mummy do when he needed help moving his gold?
A: He hired-a-glyphics.

Q: How did the mummy know it was time to retire?
A: He saw the writing on the wall.

Q: Why was the mummy sent to jail?
A: He ran a pyramid scheme.

Q: Why didn’t the mummy know where he was?
A: He skipped history class.

You can always come back to see if we add more mummy jokes to this page. Meanwhile, make sure you check out our Ghost Jokes, Demon Jokes, Witch Jokes, Halloween Jokes, Ghoul Jokes and Skeleton Jokes. There’s even more in our Halloween Jokes category.