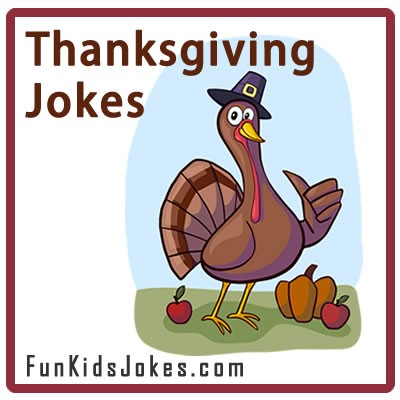 These Thanksgiving jokes are great for teachers, parents, American history buffs, children and anyone interested in pilgrims, colonists, turkey, holiday food, the Mayflower and things that go along with Thanksgiving day in America.

We hope you enjoy these Thanksgiving Jokes for Kids and make sure to share some Thanksgiving humor with friends and family. Also please look below the final joke on this page for links to 1000’s of additional Thanksgiving jokes that are sorted by category, such as Pilgrim Jokes and Turkey Jokes.

Q: What kind of music did the Pilgrims like to listen to?
A: Plymouth Rock.

Q: Who is never hungry on Thanksgiving?
A: The turkey because he’s already stuffed!

Q: What kind of cars would pilgrims drive today?
A: Plymouth.

Q: What do you use to make Thanksgiving bread?
A: May flour.

Q: How did they clean their clothes on the Mayflower?
A: Tide!

Q: Why did the scarecrow win the Nobel Prize?
A: Because he was out standing in his field!

Q: Why did the turkey cross the road?
A: To get to the other side.

Q: What kind of tan did pilgrims get?
A: Puritan.

Q: What do you call Thanksgiving for selfish people?
A: Thanks-taking.

Q: What do comedians call thanksgiving?
A: Pranks-giving.

Jokes Napkin Rings. Make joke napkin rings! Cut strips of paper about 2″x5″ and write jokes on them. Tape the ends together and use them as napkin rings. Get creative – use colored paper, put turkey stickers on them or have the kids draw something cute. Here’s a nice tutorial on how to make Thanksgiving Napkin Rings.

Joke Place-Cards. Make place-cards for the table with guest names on them. On the other side, put a joke or two for your guest to enjoy.

Thanksgiving Day Show. Have children (or anyone) do a little Thanksgiving day performance. If you have more than one willing performer, then have one read the joke question and have the other answer it.

Thanksgiving Day Game. Make up 2 teams. Give each team a list of different riddles. Teams go back and forth telling each other a joke. Teams get a point for every joke they are able to answer. The team with the most points wins something — or the losing team has to do something fun, like sing a song.

Q: What did the cranberry say to the Thanksgiving turkey?
A: Nothing. Cranberries can’t talk.

Q: What do vampires call Thanksgiving?
A: Fangs-giving.

Q: Where did the first corn come from?
A: The stalk brought it.

Q: What’s the key to a great Thanksgiving dinner?
A: The turKEY.

Q: What did the cook say after receiving a compliment for the Thanksgiving Corn Bread she baked?
A: Aw, shucks… (fyi: to shuck corn is to remove the husks around the cob)

Q: What did the Mayflower sailors play when they were bored?
A: Cards – because they always have a deck.

Q: If fruit comes from a fruit tree, where does turkey come from?
A: Apoul-tree.

Q: Why can’t you take a turkey to church?
A: They use fowl language.

Q: How do you keep a turkey in suspense?
A: I’ll tell you later.

Q: Why was the Thanksgiving dinner so expensive?
A: It had 24 carrots.

Q: What happened to the turkey who got into a fight?
A: He got the stuffing knocked out of him!

Q: What do you call it when it rains turkeys?
A: Fowl weather!

Q: Why did the turkey cross the road twice?
A: To show that he wasn’t chicken!

Q: What always comes at the end of Thanksgiving?
A: The letter G!

Alert: There are more funny Thanksgiving Puns below! See if you can spot them.

Q: Why did the police arrest the turkey?
A: They suspected it of fowl play

Q: Why did the turkey cross the road?
A: It was the chicken’s day off.

Q: What do you call the feathers on a turkey?
A: Turkey feathers

Q: What’s the best thing to put into a pumpkin pie?
A: Your teeth.

Q: What’s the most musical part of a turkey?
A: The drumstick.

Q: Can a turkey jump higher than the Empire State Building?
A: Of course – buildings can’t jump at all.

Q: When does Christmas come before Thanksgiving?
A: In the dictionary.

Q: How do you make a turkey float?
A: Root beer, a scoop of ice cream, and a turkey.

Q: What’s the best dance to do on Thanksgiving?
A: The turkey trot.

Q: What won’t a turkey eat cranberries on Thanksgiving?
A: They’re already stuffed.

Q: What’s good about crossing a turkey with an octopus?
A: Everyone gets to have a drumstick.

Q: What sound does a turkey’s phone make?
A: Wing, Wing!

Q: Why did the music band need a turkey?
A: Because he had the drumsticks!

Q: What do you get when you cross a turkey and a banjo?
A: A turkey that can pluck itself!

Q: What was the scarecrow’s favorite fruit?
A: Straw-berries!

Q: How did you send a turkey through the mail?
A: Bird class!

Q: What did the pumpkin say after thanksgiving?
A: Good-pie everyone.

Q: Why was the Thanksgiving dinner host in trouble?
A: For breaking bread.

Q: What did the Pilgrims decorate their Thanksgiving table with pretty pumpkins?
A: They thought they looked gourdgeous.

Q: What did the baby corn say to mama corn?
A: Where’s pop corn?

Q: What smells the best on Thanksgiving?
A: Your nose.

Q: What do you wear to Thanksgiving dinner?
A: A Har-VEST.

Q: What do Halloween and Thanksgiving have in common
A: One has goblins, the other has gobblers.

Q: What do you get when you divide the circumference of a pumpkin by its diameter?
A: Pumpkin pi.

Q: What was the pumpkin’s favorite sport?
A: Squash

Q: What does a pumpkin pie say after Thanksgiving dinner?
A: That was filling.

Q: Who do gourds invite to Thanksgiving dinner?
A: Their Pump-KIN.

Q: Why did the turkey sit on the tomahawk?
A: To hatchet.

Q: Where do you find a turkey with no legs?
A: Exactly where you left it…

Q: Why did the bubble gum cross the road?
A: It was stuck on the turkey’s foot!

Q: What do you get when a turkey lays an egg on a hill?
A: An eggroll.

Q: What did the boy say when his Mom wanted his help to fix Thanksgiving dinner?
A: But I didn’t break it!

Q: What do turkeys like to do on sunny days?
A: Have peck-nics!

Q: How are a turkey, a donkey, and a monkey alike?
A: They all have keys.

Q: When is turkey soup bad for your health?
A: When you’re the turkey!

Q: What is it called when a turkey fumbles in football?
A: A fowl play

Q: Why did the turkey go to see a movie?
A: Because it had Gregory Peck in it.

Q: What is a turkey’s favorite dessert?
A: Peach gobbler!

Q: When did Mayflower sailors eat dinner?
A: Maritime.

Q: Why was the Mayflower sailor put in a time-out?
A: He was naughty-cal.

Q: Why did the cranberries turn red?
A: Because they saw the turkey dressing!

Q: What did the turkey say to the computer?
A: Google, google!

Q: What do you get when you cross a turkey with a centipede?
A: Drumsticks for everyone on Thanksgiving Day!

Q: What sound does a limping turkey make?
A: Wobble, wobble!