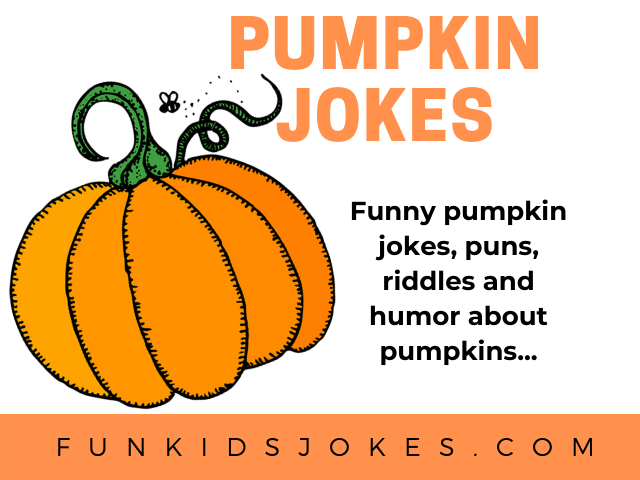 Pumpkin jokes are here! This is the best collection of pumpkin jokes you’ll find online – so if you’re looking for a pumpkin joke, you’re in luck. These clean pumpkin jokes include pumpkin puns, riddles, knock-knock jokes and more.

These funny pumpkin jokes are good anytime – but are especially popular during Autumn and during holidays like Thanksgiving, Christmas and Halloween (we also have a page of Jack-o-Lantern jokes).

And while digging into a pumpkin can be messy, digging into these pumpkin jokes isn’t because they are all clean jokes about pumpkins. Great for parents, teachers, gardeners, Halloween lovers, farmers and children of all ages. As a matter of fact, our entire site of fun kids jokes is safe for all ages!

Fun pumpkin facts: Pumpkins are a member of the gourd family and are also considered winter squash. They have been grown in North America for about 5000 years. Pumpkins were once recommended for removing freckles and healing snake bites. Pumpkins are 90-percent water. Most pumpkin varieties take 85 to 125 days to mature. About 80% of the U.S. pumpkin supply is available in October. Pumpkins are great for baking (try these recipes: Chocolate Chip Pumpkin Muffins and Pumpkin Polka Dot Cookies. Kids love these!).

Q: When asked how he was feeling, what did the pumpkin say?
A: I’m vine, thanks for asking.

Q: What are gourds afraid of?
A: Things that go Pumpkin the night.

Q: What do adventurous pumpkins do for fun?
A: Go bungee gourd jumping.

Q: Why do pumpkins sit on people’s porches?
A: They have no hands to knock on the door.

Q: Why was Cinderella not very good at softball?
A: Because her coach was a pumpkin.

Q: What’s orange and faster than a speeding train?
A: Super Pumpkin.

Q: How did the winter squash pay for things?
A: It used pumpkin bread.

Q: Why do pumpkins do so bad in school?
A: Because they had all their brains scooped out.

Q: How do you fix a gourd?
A: With a pumpkin patch.

Q: What did the pumpkin say after thanksgiving?
A: Good-pie everyone.

Q: When is an orange not an orange?
A: When it’s a pumpkin.

Q: What was the pumpkin’s favorite sport?
A: Squash.

Q: How are pumpkins like cats?
A: They’re often waiting on the porch for you when you get home.

Q: What do you call a pretty pumpkin?
A: Gourdgeous.

Q: What do you get if you divide the circumference of a pumpkin by it’s diameter?
A: Pumpkin pi.

Q: What did the orange pumpkin say to the green pumpkin?
A: You look a little sick.

Q: What did the orange pumpkin say to the green pumpkin?
A: Why orange you orange?

Q: How do gourds get to so strong?
A: By pumpkin iron.

Q: What kind of gourd grows on trees?
A: Plumkins

Q: Who helps little pumpkins cross the road safely?
A: The crossing gourd.

Q: What’s black, white, orange and waddles?
A: A penguin carrying a pumpkin.

Q: What do you call an athletic pumpkin?
A: A jock o’ lantern.

Q: What do you call an overweight pumpkin?
A: A Plumpkin.

Q: Why were the two pumpkins so close?
A: They had deep roots.

Q: What does a pumpkin pie say after a big meal?
A: That was filling.

Q: What veggie does a pumpkin become when an elephant steps on it?
A: Squash.

Q: What did the pumpkin say to the pie baker?
A: Use apples instead.

Q: Why was Cinderella not so good at softball?
A: Because her coach was a pumpkin.

Q: Which English pop singer is most popular during Thanksgiving holiday?
A: Pumpkin Spice.

Q: What do pumpkins eat at the movies?
A: Pulp Corn.

Q: What’s orange and goes choo-choo?
A: A Pumpkin in Train-ing.

Q: When asked how he was feeling, what was the pumpkin’s reply?
A: I’m vine, how are you?

Q: Why did the witch paint her toenails orange?
A: So she could hide in the pumpkin patch.

Q: What do you call a gourd’s family members?
A: Pump-kin.

Q: When is a pumpkin not a pumpkin?
A: When you drop it – then it’s a squash.

Q: What kind of animal loves pumpkins?
A: Orange-atans.

Q: What’s the best thing to put in a pumpkin pie?
A: Your teeth.

Q: Why wouldn’t the teacher bring the class to the pumpkin patch?
A: It was in a seedy part of town.

Q: Who did the gardener say when his squash went missing?
A: There’s pumpkin strange happening around here…

Q: Who is the leader of all pumpkins?
A: The Pumpking

Q: Why are pumpkins so orange?
A: Syracuse is their favorite team.

Q: Why did the pumpkin turn red?
A: Because it saw the salad dressing.

My neighbor is a pumpkin who sells paintings of pumpkins… she really carved a niche out for herself.

Knock knock.
Who’s there?
Pumpkin.
Pumpkin who?
Pumpkin-nickel bread is my favorite!