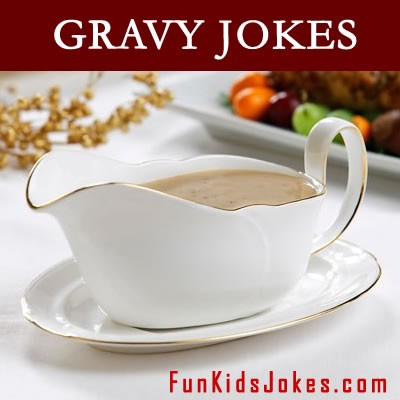 Funny gravy jokes? You betcha! If you’re looking for jokes about gravy, then this collection of gravy jokes is for you.

Whether you’re looking for Thanksgiving jokes, Christmas dinner jokes or just some riddles for your gravy-smothered dinner, these clean gravy jokes are sure to satisfy your hunger.

Sometimes it can take a little time to make a nice homemade batch of gravy – so why not share gravy jokes while you’re doing it? Need a recipe for gravy? Try this one for Porcini Mushroom Gravy.

Q: Did you hear about the comedian who drank a pot of gravy?
A: They say he was a laughing stock.

Q: What was the gravy afraid of?
A: Goblin.

Q: Why is it so easy for mashed potatoes to travel?
A: They take the gravy train.

Q: What kind of dog races on Thanksgiving?
A: Gravyhounds.

Q: Why couldn’t the gravy boat make it across the table?
A: There was a maize to get past.

Q: Why didn’t the mashed potato’s plan to avoid the gravy work?
A: It was half-baked.

Q: What did the gravy say to the mashed potatoes?
A: You are a-peeling.

Q: What did the apple pie say when the gravy said he was ugly?
A: Beauty is in the pie of the beholder

Q: What did the gravy say about the angry mashed potatoes?
A: Taters gonna tate.

Q: How did the gravy get away from the holiday feast?
A: It waved down a taxi cob.

Q: Why does gravy look so good next to buttered corn?
A: Their colors corntrast.

Q: Why was the gravy avoiding the succatash?
A: He didn’t feel cornfortable being near it.

Q: What do you call gravy when the turkey’s dry?
A: The gift that keeps on Thanksgiving.

Q: How did the gravy lover stop from eating it over the holidays?
A: Cold turkey.

Q: What did the boy say when his Mom wanted his help to fix the gravy?
A: But I didn’t break it!

Q: Why did the potato start an argument with the gravy?
A: It was an agi-tater.

Q: Why was the gravy sent to the principal’s office?
A: He was acting saucy.

Knock Knock
Who’s there?
Gravy.
Gravy who?
Gravy-hicle in the driveway.

A: What do you get when it rains mashed potatoes and gravy?
Q: Spuddles.