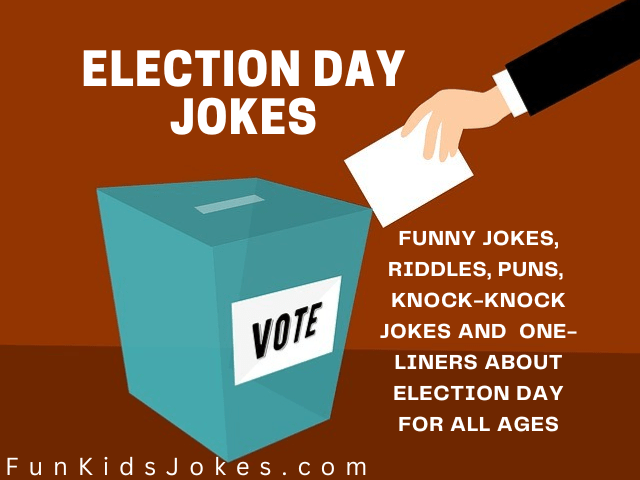 Election Day Jokes and political jokes for election day for parents, teachers, adults and kids of all ages.

Check out our collection of Clean Election Day Jokes for people looking for political humor that is kid friendly.

These Election Day Jokes for Kids are perfect for election day, and the run-up to an election. Election jokes are great for parents, teachers, politicians and children in any grade.

Q: What are politically enthusiastic Robins known for?
A: Early Voting

Q: What happened when Ben Franklin told a joke to the Liberty Bell?
A: It cracked it up.

Q: How did the poll worker get everyone to work together?
A: She delegates.

Q: How did the US flag greet the Canadian flag?
A: It waved.

Q: Why was Ben Franklin so healthy?
A: He had a good Constitution.

Q: Why does Mississippi see so many voters at the polls?
A: Because it has 4 eyes.

Q: On election day, what did Delaware?
A: Her New Jersey.

Q: What kind of limb did the candidate for president go on?
A: An executive branch

Q: What did the corrupt senator order on election day?
A: Stuffed ballots.

Q: What grows longer every election year?
A: The branches of government.

Q: Where did the politician take his wife for something sweet?
A: On a candydate

Q: What is the capital of Washington?
A: W.

Q: Where can children vote?
A: In swing states

Q: What is the capital of Alaska?
A: Don’t Juneau this one?

Q: Where do poll workers get trained?
A: Electoral College

Q: What do you call an argument between a politician and one of his donors?
A: A conflict of interest.

Q: What US state gives out tiny drinks to voters?
A: Mini-soda.

Q: Why did the county legislator fall asleep?
A: He was one of the Bored Members.

Q: What does it cost to vote?
A: You’ll have to look at the Bill of Rights to find out.

Q: How hot was it in Arizona this summer?
A: It was so hot that people were sweating like a politician on election day.

Q: What’s the difference between baseball and politics?
A: In baseball, you’re called out if you’re caught stealing.

Q: What sport did the politician want to learn?
A: How to Ballot Box

Q: What’s the biggest problem with political jokes?
A: Too many of them get elected.

Q: What did the roller-blader wear to go voting?
A: In-line skates.

Q: Who made it take so long to cast votes in Pennsylvania this year?
A: Philly Buster

Q: Why was Evel Knievel criticized for jumping his motorcycle over the polling station?
A: It was a politically motivated stunt.

Q: What did they say when they saw Abraham Lincoln in line at the polling place?
A: You look great for your age!

Q: Why did the boy vote for the bicycle?
A: He liked how he spoke.

Q: Why couldn’t the spaghetti vote in this district?
A: He was an impasta.

Q: Which country gets crowded with Americans on election day?
A: Poland – because we are told to go to the polls.

Q: What is an October surprise to kids?
A: When they get full-size candy bars trick-or-treating on Halloween.

Q: How do heavyweight boxers cast a vote on election day?
A: With PUNCH card ballots.

Knock knock.
Who’s there?
Paul.
Paul who?
Paulster looking to ask you a few questions about the election!