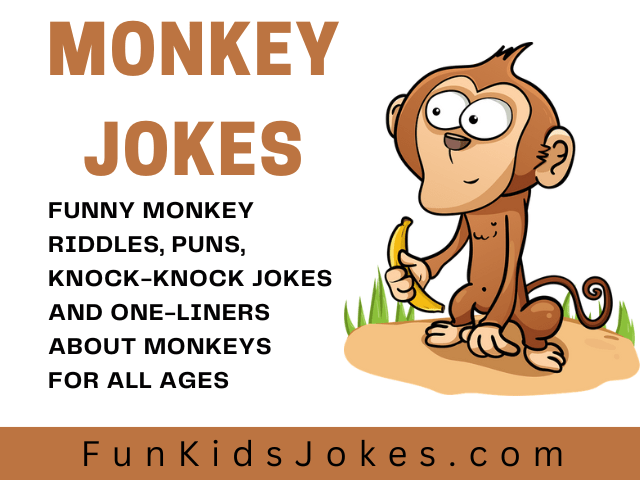 Monkey jokes for kids and adults, including Monkey Puns, Monkey Riddles, one liners and knock knock jokes. These Monkey Jokes are great for teachers, parents, animal lovers, zoo workers and anyone who likes monkeys.

This is the best collection of Clean Monkey Jokes you’ll find anywhere.

Did you know that there are 334 different species of monkey in the world? The five most popular types of monkey are the spider monkey, the Capuchin monkey, the lion monkey, the howler monkey and the Barbary macaque. The strongest monkey is the Mandrill.

These monkey jokes for kids are especially fun for trips to the zoo or after reading a book with monkeys as characters. One of the most popular monkey characters for kids is Curious George.

Q: What do monkeys say when they meet a banana?
A: Yellow.

Q: How did the monkey fix his bicycle?
A: With a monkey wrench.

Q: Where do monkeys buy their clothes?
A: Banana Republic.

Q: Which angry monkey was seen with the man in a yellow hat?
A: Furious George.

Q: Why did the banana cross the road?
A: To get away from the monkey!

Q: Why did the monkey eat the banana?
A: Because it’s a monkey!

Q: What Christmas carol do all the monkeys like to sing?
A: Jungle Bells.

Q: Why did the monkey keep falling off his bike?
A: He slipped off the banana seat.

Q: What did the daddy monkey call his baby monkey?
A: A chimp off the old block.

Q: Which type of monkey might you think has eight legs?
A: A spider monkey.

Q: Why were the lions hungry at the jungle party?
A: Nobody brought any chimps and dip.

Q: Where do monkeys go to exercise?
A: The jungle gym.

Q: What do you call a monkey who can’t keep a secret?
A: A blaboon.

Q: What do you call a monkey who can fly?
A: A hot air baboon.

Q: What kind of monkey orders seafood for dinner?
A: A shrimpanzee.

Q: Why don’t monkeys play UNO in the jungle?
A: There are too many cheetahs.

Q: Which monkey eats a lot of cereal?
A: Cheerios George.

Q: What did the baboon study while at Harvard?
A: The law of the jungle.

Q: Why did the monkey go to jail?
A: Because he was into some monkey business.

Q: What did the monkey say when the lion grabbed it by the tail?
A: That’s the end of me!

Q: What do monkeys drink on hot summer days?
A: Iced Chimpan-tea.

Q: Who was that monkey with the wand and broomstick?
A: Hairy Potter!

Q: What do you call a monkey who works as a potato chip server?
A: A chipmunk.

Q: What did the long-tailed macaque monkey say after it’s tail got caught in the blender?
A: Won’t be long now…

Riddle: What does a chimpanzee have if he’s holding 25 bananas in one hand and 35 bananas in the other?
Answer: Really, really big hands.

Riddle: Why didn’t the monkey want to eat bananas any longer?
Answer: He thought they were long enough already.

Q: What do you call a monkey who helps win the World Cup?
A: A chimpion.

Q: How do fire fighters catch stray monkeys?
A: The climb a tree and act like a banana.

Q: How did the monkey get down the stairs so quickly?
A: He slid down the banana-ster.

Q: How do monkeys get a replacement tail if they lose theirs?
A: They go to a retailer.

Q: What do you call a monkey at the North Pole at Christmastime?
A: Very lost.

Q: What do monkeys use to buy things?
A: Banana bread.

Q: What kind of a key opens a banana?
A: A monkey.

Q: How do you catch a snow monkey?
A: Climb up a tree and act like a banana.

Q: What was the ghost monkey’s favorite fruit?
A: Boo-nana.

Q: What did the banana say to the monkey?
A: Nothing – bananas can’t talk.

Q: What did the banana do when he saw a monkey?
A: It split.

The doctor told the monkey that it needed to eat more whole grains… so now it only eats BRANanas.

Q: Why did the monkey go to see the doctor?
A: It ate a bad banana and wasn’t peeling very well.

Q: Why did the monkey like the banana?
A: Because it had appeal…

Knock Knock.
Who’s there?
Jimmy.
Jimmy who?
Jimmy a benana!