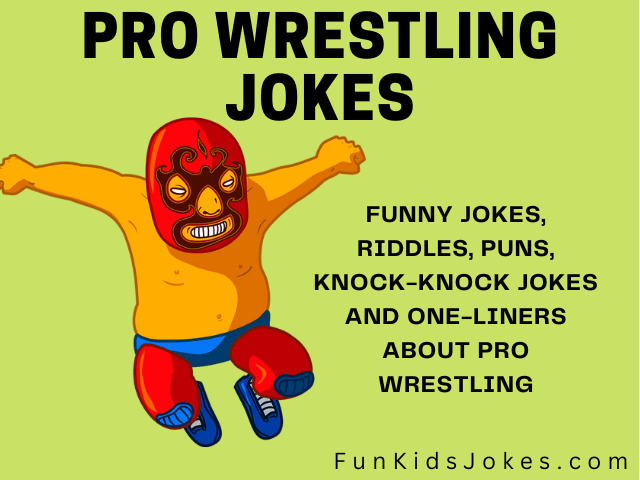 These wrestling jokes are great for wrestlers and wrestling fans. And because they are Clean Wrestling Jokes, they are perfect for kids, parents, grandparents, teachers, coaches and anyone who enjoys professional wrestling.

These professional wrestling jokes are great for parties and car trips to wrestling events.

These are great wrestling jokes for kids of all ages and include funny and silly jokes about wrestling.

Q: What was the vegetable wrestler’s favorite move?
A: An artichoke hold.

Q: Why are scrambled eggs like a losing wrestler?
A: Because they’ve both been beaten.

Q: Why was Charlie Brown sad about his Halloween wrestling match?
A: He got the Rock.

Q: How many TNA Impact Wrestling fans does it take to screw in a lightbulb?
A: All two of them.

Q: Why is it always warmer after a wrestling match?
A: All the fans have left.

Q: Why did the wrestler bring his mp3 player to the match?
A: His opponent said he was going to get a beat down.

Q: What lights up a wrestling ring?
A: A match.

Q: Which All Elite Wrestling (AEW) wrestler has the biggest shoes?
A: The one with the biggest feet.

Q: Why did Ring of Honor (ROH) wrestlers do so well when they were in school?
A: They knew how to use their heads.

Q. What runs around a wrestling ring but never goes anywhere?
A: The ropes.

Q: How do chickens cheer for their favorite wrestler?
A: They egg them on.

Q: Why didn’t the dog want to wrestle?
A: He was a boxer.

Q: Why didn’t the lousy Major League Wrestling (MLW) wrestler have a website?
A: They couldn’t string three W’s together.

These professional wrestling one liners are pretty witty and should get a grin out of children and adults.

Stone Cold Steve Austin always brought a piece of paper to a wrestling match, just in case The Rock was his opponent.

I watched an amazing show called Origami Wrestling the other night on paper-view.

Two silk worms were in a WWE match. It ended in a tie.

Wrestling doesn’t make much sense… Opponents without pants fight over a belt.

These WWE wrestling jokes will be sure to get laughs from fans of WWE (World Wrestling Entertainment).

Q: How do they hire WWE wrestling referees?
A: With stilts…

Q: Did you hear about what John Cena told his kindergarten teacher on report card day?
A: You can’t C me!

Q: What do you call Dwayne Johnson’s Wrestling Career?
A: Classic Rock.

Q: What kind of soda do wrestlers use in their ice cream floats?
A: AEW Root Beer.

Q: How do wrestlers drink their coffee?
A: Stone Cold (Steve Austin)

Q: What did Mick Foley say to the snowman?
A: Have an ice day!

Q: What’s the difference between a WWE wrestler and a soccer player?
A: A WWE wrestler will get up after faking an injury.

Q: How do WWE wrestlers stay cool during matches?
A: They stand near the fans.

Q: What did John Cena tell the Sushi Chef?
A: You can’t Sashimi.

Q: Why does Mick Foley buy Walmart brand cola?
A: He always goes for the cheap pop.

No collection of Professional Wrestling Jokes would be complete without some funny wrestling knock-knock jokes. Here are a few silly ones to chuckle at.

Knock, knock
Who’s there?
Justin
Justin who?
Just in time for the main event!

Knock Knock
Who’s there?
Isabelle.
Isabelle who?
Isabelle going to ring so the wrestling match starts?

Knock Knock
Who’s there?
Felix
Felix who?
Felix-cited about WWE this year!

Knock Knock
Who’s there?
Duh.
Duh who?
Duh-Wayne the Rock Johnson, that’s who!