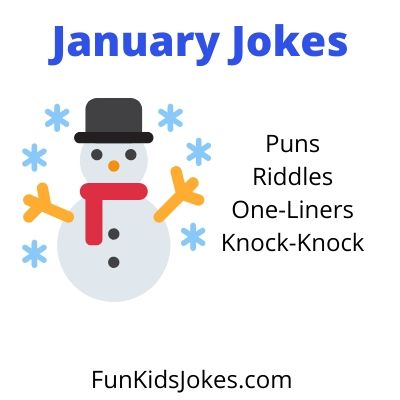 Funny January jokes for kids! These jokes about the month of January are fun for all ages.

Kick the year off with smiles!

You’ll find jokes about the month of January, new year’s resolutions, winter, snow and other things related to the first month of the year.

Q: Which month does the Brady Bunch like most?
A: JANuary.

Q: What do you call a nice ghost on a cold January night?
A: Casp-burr.

Knock, knock
Who’s there?
Jan.
Jan who?
January is my favorite month.

Q: Where do storm troopers go to warm up on cold January days?
A: The Darth Mall.

Q: What is the first month of the year in Transyvania?
A: Janu-eerie.

Q: Where do you find Google during January?
A: The Winternet.

Q: How did Jack Frost get to work on New Year’s Day?
A: By icicle.

Q: What can you catch in the winter with your eyes closed?
A: A cold.

Q: What’s the best thing about January?
A: No more Christmas Carollers!

Q: Who helped Cinderella with her New Year’s Resolutions?
A: Her Janufairy Godmother.

Q: What do you have in December that you don’t have in January?
A: The letter D…

Q: How can you farm during the winter?
A: Use a snow plow.

Q: What did the cheerleaders say on New Year’s Day?
A: Happy New Cheer!

Q: What do some couples do during the first month of the year?
A: Get Janumarried.

Q: What happened to the woman who stole a calendar on New Year’s Day?
A: She got 12 months!

Knock, knock.
Who’s there?
Dishes.
Dishes who?
Dish is the coldest January ever.

Knock, knock
Who’s there?
Gladys.
Gladys who?
Gladys January. How about you?

Q: What was the hypocondriaque’s New Years Resolution?
A: To lose wait…

Q: What did the Blue-Ray Disc announce on December 31st?
A: His hi-rez-olutions.

Q: What new year’s resolution should a basketball player never make?
A: To travel more…

Q: What’s the easiest way to keep your New Year’s resolution to read more?
A: Put the subtitles on your TV.

Q: How can you be more efficient with New Year’s Resolutions?
A: Make a copy of your list so you can pull it out again ever year.

Q: What was dog’s New Year’s resolution?
A: Woof… and he really means it this year.

Q: What’s the easiest resolution to keep?
A: This year, I’m going to be myself!

Q: What was the Amityville Priest’s resolution for the new year?
A: To exorcise more.

A: What was the towel’s new year resolution?
A: Find a new way to dry-it (diet)

Q: What was the motivated lazy person’s new year’s resolution?
A: To procrastinate more…

Q: What is a stinky resolution for the new year?
A: To bathe less often…

Q: What did the bank robber announce on January 1st?
A: His New Year’s restitutions….

Q: What did the chimney resolve to do for the new year?
A: Stop smoking.

Q: What was Dr. Frankenstein’s new year’s resolution?
A: To make new friends…