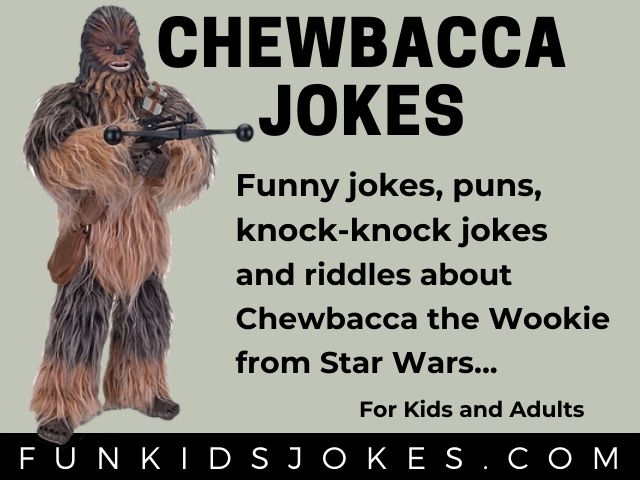 Chewbacca jokes, riddles, puns and Wookiee humor for kids and adults of all ages. These clean Chewbacca jokes are fun for children, parents, teachers, Wookiees, Jedi, science fiction fans and anyone who is a fan of Star Wars. These are the best Chewbacca jokes online!

Chewbacca is a legendary Wookiee warrior made famous by the Star Wars movies. The Wookiee homeworld is on the planet Kashyyyk. He is Han Solo’s co-pilot on the ship named the Millennium Falcon.

Chewbacca is large and covered with hair – with looks that can easily be compared to that of a Sasquatch or Bigfoot (see Bigfoot Jokes). Did you notice how Wookiee is spelled? Most people incorrectly spell it as “Wookie” instead.

Chewbacca jokes and Star Wars jokes are great for May 4th (aka: May the Fourth be With You day), Star Wars parties and Halloween.

We hope you enjoy these funny Chewbacca jokes. If you’re a Star Wars fan, then make sure you check out some of these other related joke collections: Star Wars Jokes, Darth Vader Jokes, Darth Maul Jokes and Luke Skywalker Jokes.

Q: Why did Chewbacca’s sock have a hole in it?
A: How else could he put his foot in it?

Q: Why was Chewbacca doing stomach crunches while he was on Hoth?
A: He was trying to be the Abdominal Snowman.

Q: What question annoys Chewbacca more than any other?
A: Are you a Sasquatch?

Q: Chewbacca is a tricky word to spell. How is it spelled backwards?
A: It is spelled “ti” backwards…

Q: Why did Chewbacca get sent back down to play minor league baseball?
A: He was making too many Wookiee mistakes.

Q: Why did Chewbacca take up gardening?
A: To he a Hairy Potter.

Q: What brand of lacrosse equipment does Chewbacca use?
A: Warrior.

Q: What do you call Chewbacca when he has chocolate in his hair?
A: Chocolate Chip Wookiee

Q: What did the rancor say after he ate a Wookiee?
A: Mmmmm, chewie

Q: How do you unlock doors on Kashyyyk?
A: With a woo-key

Q: Why does Chewbacca always invite Luke Skywalker to his picnics?
A: He always has the forks with him.

Q: What do you call the website Chewbacca started that gives out Empire secrets?
A: Wookieeleaks

Q: What did the Jedi dentist say to Chewbacca?
A: May the floss be with you.

Q: Why wouldn’t Chewbacca tell jokes on the Millennium Falcon?
A: The ship might crack up.

Q: Which side of Chewbacca has the most hair?
A: The outside.

Q: Why was Chewie late to the party?
A: He went for a haircut and it took a very, very, very long time.

Q: Why does the galaxy’s most famous Wookiee warrior like licorice?
A: Because it’s Chewy.

Q: Why did Han tell Chewie not to go to the circus?
A: It was a flea circus and he didn’t want him to steal the show! ​

Q: What happens when Chewbacca jumps into green water?
A: He gets wet.
​
Q: Where won’t Chewbacca ever go to shop?
A: At the Darth Mall.

Q: Why did Chewbacca cross the road?
A: Because Darth Vader forced him to.

Q: How can you have a partner and be solo at the same time?
A: When you’re Han SOLO and your partner is Chewbacca!​

Q: What time is it when Chewbacca steps on your watch?
A: Time to get a new watch.
​
Q: Why wouldn’t Chewbacca eat his toast?
A: It was on the Dark Side.
​
Q: How did Luke know what Chewbacca had gotten him for Christmas?
A: He felt his presents.

Q: What is Chewbacca’s favorite holiday?
A: Halloween, because everyone thinks he has a costume on (plus he gets candy).

Q: Who is Chewbacca’s favorite student at Hogwarts?
A: HAIRY potter.

Relaxing on the Falcon,
Playing games with Chewie,
But when he lost at Dejarik,
He got a bit screwy! (Dejarik is the chess game with holo-creatures in Star Wars)

Roses are red,
violets are blue,
if you love Chewbacca,
may the force be with you.

On the planet Kashyyyk,
There was a great Wookiee,
He was known to be great,
at eating chocolate chip cookies!