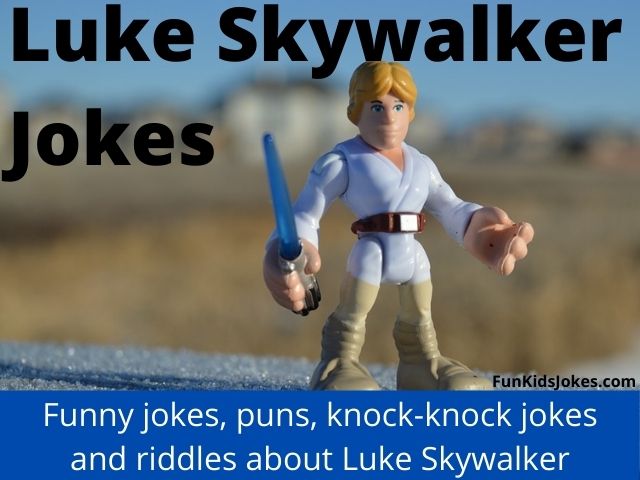 While these jokes about Luke Skywalker are funny, you’ll find even more Star Wars puns, knock-knock jokes and one-liners in our Mega collection of Star Wars jokes – or check out our entire Star Wars Jokes Directory broken down by character, movie and more.

Q: How does Skywalker like his tea?
A: Luke Warm…

Q: Why did Darth Vader throw steaks at Luke Skywalker?
A: So he could MEAT his destiny.

Q: Which Jedi like to fly during rain storms?
A: Luke Skywater

Q: What happened when Luke Skywalker’s X-Wing landed in the water on Dagobah?
A: It got wet.

Q: Why was Luke so slow?
A: He was a Skywalker, not a Skyrunner!

Q: What did Yoda say when Luke Skywalker said something obvious?
A: No-Duh!

Q: Who served Luke Skywalker at the Death Star Diner?
A: Darth Waiter

Q: What did they call Luke Skywalker after throwing him down the rancor pit?
A: The appetizer…

Luke Skywalker and Obi-Wan Kenobi are in a Chinese restaurant and Luke can’t figure out how to use the chopsticks. Finally, Obi-Wan says, “Use the forks, Luke.”

Q: How do Ewoks contact Luke Skywalker when they were apart?
A: Ewokie Talkies

Q: What was the cleanest Star Wars movie that had Luke Skywalker in it?
A: Episode IV: A New Soap

Q: What did Luke Skywalker say to the sheep?
A: May the force be with ewe.

Q: How was Luke Skywalker so comical?
A: He was a master of the Farce.

Q: Why did people give Luke Skywalker gift receipts at his birthday party in Episode IV?
A: They knew the Return of the Jedi was coming…

Q: How did Luke Skywalker get hurt in the orchard?
A: The Empire apple stuck back…

Q: What did the sweet potato say to Luke Skywalker?
A: I yam your father.

Q: In which Star Wars movie did Luke Skywalker pitch his best game?
A: The Empire Strikes Out

Q: Why didn’t Luke Skywalker ever ask Yoda for money?
A: Yoda was always short.

Q: What did the lunch lady say to Luke Skywalker?
A: Use the forks Luke.

Q: Why did Luke Skywalker feel bad at the end of Episode IV: A New Hope?
A: Because his light saber was still blue.

Q: Did Luke Skywalker help Darth Vader?
A: Sure – he gave him a hand in the second movie…

Q: Who was Luke’s more observant cousin?
A: Look Skywalker

Q: Why is Luke Skywalker always invited on picnics?
A: He has the forks with him.

Q: How did the sand people know where to find Luke Skywalker?
A Tuscan radar. (FYI: Sand People are also known as Tuscan Raiders)

Q: Where did Luke Skywalker buy a new arm?
A: At the second-hand store.

Q: Why was it so hard to find Luke Skywalker during the day?
A: He was a Jedi Night

Q: How did Luke save the tomatoes in his garden?
A: By using his blight saber.

Q: Where does Luke Skywalker shop for Father’s Day?
A: At the Darth Maul.

Roses are red,
violets are blue,
if you like Luke Skywalker,
may the force be with you.

Q: How does Luke Skywalker always know what he’s getting for his birthday?
A: He feels the presence.

Q: Which Irish x-wing pilot and member of Red Squadron flew alongside Luke Skywalker in the Battle of Yavin?
A: Wedge O’Cheese

Knock, Knock.
Who’s there?
Luke.
Luke who?
Luke-a-laylee, play me a song.