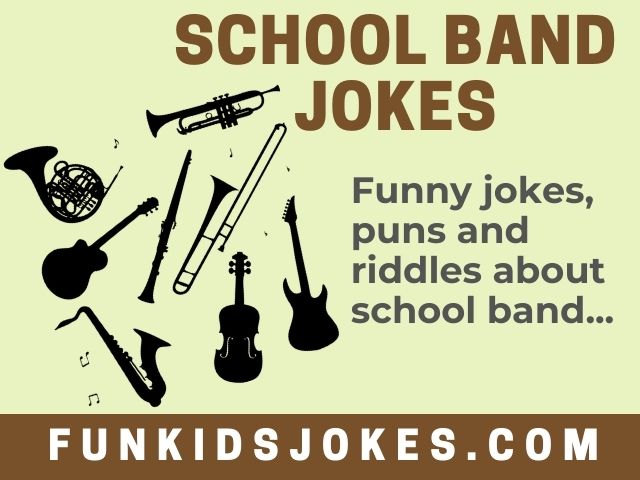 Funny school band jokes for kids and adults of all ages. These clean band jokes include puns, riddles and knock-knock jokes about band members, staff and musical instruments. They are perfect for concert band students, band parents, directors and musicians in Middle School, Junior High School and High School.

School bands are a group of student musicians who rehearse and perform music together, and usually includes one or more concerts during the school year. Younger students usually play in a single school band, while older students usually have the chance to play in multiple bands like jazz band, concert band, brass ensemble and marching band (see Marching Band Jokes).

We hope you enjoy these school music band jokes and band humor. Have some added fun by including some jokes in your favorite band member’s instrument case or sheet music book.

Q: Which band musician performs with the most force?
A: Oboe-Wan Kenobi

Q: What did the musical director do when his 1st trumpet cut his finger?
A: Gave him a BANDaid.

Q: Which mythical musical instrument was in the Fairy tale?
A: A Unic-horn.

Q: What do you call a crazy band competition?
A: Bandamonium!

Q: What’s always right above the drum major?
A: The drum Colonel

Q: Which Pokemon is never allowed to a band concert?
A: Coffin.

Q: What band do most color guard relate to?
A: In Synch.

Q: What’s the best part of an Autumn band competition?
A: The color gourd.

Q: Why don’t they hold band competitions in the jungle?
A: Too many cheetahs.

Q: What do carpenters have in common with marching bands?
A: Drill.

Q: Which hockey team do marching band guard members cheer for?
A: Sabers.

Q: Which band instrument is useful in the jungle?
A: The snare drum – so you can catch a lion before it catches you!

Q: Why did the band mom order her son an imported instrument?
A: He wanted a French horn…

Q: Why doesn’t the struggling band have a website?
A: They can’t string three W’s together in competition.

Q: What are ten things band directors can always count on?
A: Their fingers!

Q: How are school band members like Rodney Dangerfield?
A: They get no respect (but they deserve it!!)

Q: Why was band practice so hard?
A: Too many notes.

Q: How are scrambled eggs like a losing marching band?
A: They’re both beaten.

Q: What’s the range of a tuba?
A: About 5 yards if you have a strong enough arm!

Q: How did the band fix a broken tuba?
A: With a tuba glue.

Q: Who protects the marching band instruments?
A: The guard.

Q: Why does the color guard have so much cash?
A: Money hands.

Q: Why was the softball player so good at color guard?
A: She had a grand slam position.

Q: Which Star Wars character never liked playing along with the other musicians?
A: Han SOLO.

Q: What gives marching bands their energy?
A: The battery.

Q: What do talented trumpet players in band have in common with pirates?
A: They can both hit the high C’s.

Q: How to trumpet players greet each other at band competitions?
A: “Hello, I’m better than you.”

Q: What did the band director recruit the trumpet playing cow?
A: He was a great moo-sician

Q: In what month do trumpet players parade the most?
A: March!

Q: How do you sort band musicians?
A: Using scales.

Q: What do color guard and naughty football players have in common?
A: They get flagged!

Q: Why was the girl kicked out of color guard?
A: Too much cheater tape.

Q: Why couldn’t the trumpet player perform in the band competition?
A: Someone took his notes…

Q: What do you call a band that plays boring songs during parades?
A: A marching bland.

Q: If the tubas stand behind the trumpets, what comes after the tubas?
A: The three-bas.

Q: What kind of cabinet do band directors like the least?
A: The lazy sousaphone

Q: Why does a concert hall get warm after the bands play?
A: Because all the fans have left.

Q: Which marching band member can jump higher than the judges table?
A: All of them – a table can’t jump.

Q: Which pack of dogs helps setup for the marching band?
A: A pit bull crew.

Q: Which band instrument is made out of a non-caloric sweetener?
A: Xylitolphone

Q: Why did the skeleton join band?
A: To play tromBONE.

I was asked to play the BASS drum for my high school band, but I felt like there was something FISHY about the offer.

The percussionist were bragging again because they thinks his drum set are a status cymbal.

I was trying to count the saxophones in our Junior High School band… looks like we have Tenor so.

Knock knock.
Who’s there?
Mytrom.
Mytrom who?
Mytrombone hit the trumpet player in front of me – oops!

Knock knock.
Who’s there?
Barry.
Barry who?
Barry-tone is my favorite instrument, but euphonium isn’t bad either!

Knock knock.
Who’s there?
Clair.
Clair who?
Clairinet is my favorite instrument!

Knock knock.
Who’s there?
Sue.
Sue who?
Sousaphone so you better answer her!