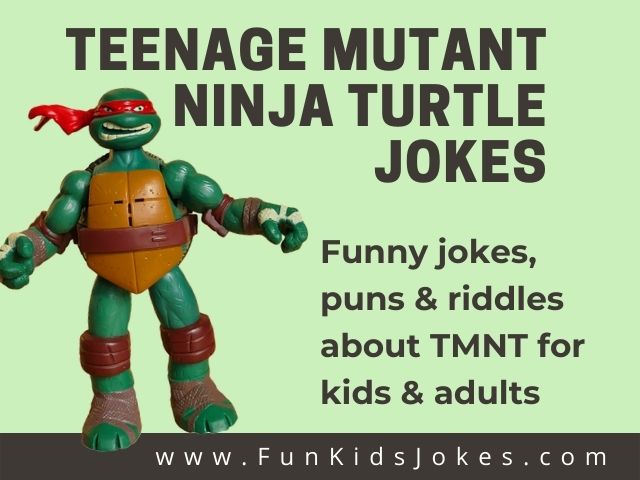 There are also cross-overs between Teenage Mutant Ninja Turtles and characters from other shows and comics, including Batman, Cerebus the Aardvark, Flaming Carrot, Gizmo, Knight Watchman, Power Rangers, Savage Dragon and Miyamoto Usagi.

We hope you are getting some laughs from these jokes that relate to the Teenage Mutant Ninja Turtles, who people call the “Teenage Mutant Hero Turtles” in the UK.

Q: Which droid did Jedi Splinter use in the rebellion?
A: Leonar-2-D2.

Q: What did the taco say to Michelangelo?
A: I like your shell.

Q: What do you call the Ninja Turtles?
A: Shell-ebrities.

Q: Did you know that Teenage Mutant Ninja Turtles can also squirt ink?
A: Just Squidding!

Q: Where do Ninja Turtles keep their money?
A: In a riverbank.

Q: How did Krang make Raphael laugh?
A: With ten-tickles. (Krang has tentacles)

Q: Where does Donatello sleep?
A: In a waterbed.

Q: How did Splinter make the turtles fast?
A: By not feeding them. (when you don’t eat for a period of time, it is called fasting)

Michelangelo was joking around the other night… he was shell-larious.

Q: What do Teenage Mutant Ninja Turtles fly in?
A: A shellicopter.

Q: Why couldn’t Michelangelo decide on a pizza topping?
A: He was inde-SLICE-sive.

Q: How did Stockman get to the second floor?
A: He went up the Baxters. (back stairs and his name is Baxter Stockman)

Q: What did Donatello, Leonardo, Michelangelo and Raphael say about Splinter?
A: He tortoise so much.

Q: What did Splinter do for Leonardo’s birthday?
A: Had a shell-ebration

Q: Where did the Teenage Mutant Ninja Turtles take Bebop and Rocksteady?
A: To the shell block. (Cell Block is part of a prison)

Q: What kind of photos does Raphael from the Ninja Turtles take?
A: Shell-fies.

Q: How did Michelangelo mend the broken pizza?
A: With tomato paste.

Q: Why don’t any of the Teenage Mutant Ninja Turtles work in an office?
A: They can’t stand the Shredder.

Q: In what month do Ninja Turtles spend the most time o kneeling?
A: April. (April O’Neil is a TMNT character)

Q: Which TMNT aliens never give up?
A: Try-Try-Try-ceratons.

Q: How do Teenage Mutant Ninja Turtles contact each other?
A: With their shell phones.

Q: How did the Ninja Turtles find the Foot Clan?
A: They followed their foot prints!

Q: Where did the Ninja Turtles go to eat when they were in Egypt?
A: Pizza Tut.

Q: Why didn’t Krang go to the party?
A: He had noBODY to go with.

Q: What is Umeko’s biggest pet peeve?
A: People asking her about Sensei Wu! (Umeko goes by the name Ninjaro. Sensui Wu is from Ninjago).

Q: Who do the Ninja Turtles say is the most dangerous guitarist in New York?
A: Slash. (Slash is also the name of the guitarist from a rock band)

Q: Why did Raphael travel to the Marvel Universe?
A: Thor Odin money.

Q: Why did the TNMT’s rush to the beach?
A: They heard someone spotted a SHREDDER on a surfboard. (shredding is when a surfer gets a lot of spray)

Q: What do you call a ninja turtle with an addiction to Krispy Kremes?
A: DONUT-ello

Q: What happens if you get into a fight with one of the famous Teenage Mutant Ninja Turtles?
A: You’ll get shell shocked.

Q: What do you call Ace Duck when he spies on Splinter?
A: A peeking duck.

Q: Why did Leonardo put his head on a piano?
A: He was playing by ear.

Q: Why couldn’t the Ninja Turtle cross the road?
A: Because he didn’t have enough turtle power.

Q: What kind of pizza did Mikey order for Mayhem?
A: PUPeroni pizza.

Q: What did Donatello say the difference was between Shredder and a pizza?
A: Pizzas are good…

Q: Which Superfriend do the Ninja Turtles like the most?
A: Aqua-man.

Knock Knock
Who’s there?
Don.
Don who?
Don-ate-jello – and it was cherry flavor!

Knock Knock
Who’s there?
Donatello
Donatello who?
Donatello nobody that Ima here.

Knock knock.
Who’s there?
Michelangelo.
Michelangelo who?
Michael an Jello go together like me and ice cream!