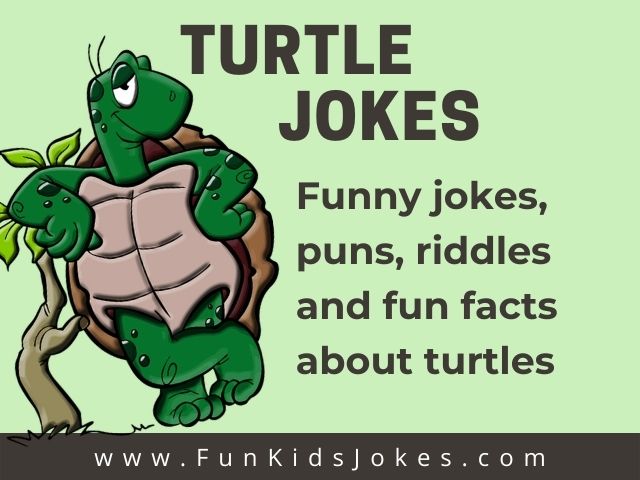 Turtle jokes, riddles and puns for kids and adults of all ages. These clean turtle jokes are fun for anyone, but are especially popular with fans of turtle characters and people with turtles as pets.

Some of the most popular turtle characters include:

Turtles are pretty amazing reptiles. For some family-friendly info, check out “10 Totally Awesome Facts About Turtles” from National Geographic.

These turtle riddles, one-liners, puns, and knock-knock jokes are for parents, teachers, pet store staff, biologists, zoologists, turtle lovers, children and adults of all ages who are interested in turtles. We also have a special page dedicated to Teenage Mutant Ninja Turtles Jokes for TMNT fans.

Q: Where do turtles go when there’s a hurricane?
A: A shell-ter.

Q: Which type of turtles dominate the winter olympics?
A: Sliders

Q: What could you find in the pond behind Norman Rockwell’s house?
A: Painted Turtles

Q: What song do turtles sing during the holidays?
A: Rudolph the Red-Eared Slider

Q: What did the taco say to the turtle?
A: I like your shell.

Q: Where did the turtle get it’s energy?
A: From one 9-Volt Dura-Shell. (Duracel is a brand of battery)

Q: What do you call a famous turtle?
A: A shell-ebrity.

Q: What do sea turtles use for money?
A: Sand dollars.

Q: Did you know that sea turtles can also squirt ink?
A: Just Squidding!

Q: Where do mud turtles keep their money?
A: In the riverbank.

Q: Where do Pond Slider turtles sleep?
A: In waterbeds.

Q: Why wouldn’t the yellow bellied turtle share his blood worm?
A: He was too shellfish.

Turtles have a pretty healthy diet since they don’t eat fast food.

I went to see a turtle comic the other night… he was shell-larious.

I had a teacher named Mr Turtle… he tortoise well.

Q: What do you call a flying turtle?
A: A shellicopter.

Q: What happens when you cross a pig with a tortoise?
A: You end up with a slowpork.

Q: What did the turtle sleep all day?
A: It was noc-turtle.

Q: What kind of turtle should you never ask for directions?
A: False Map Turtles

Q: What do turtles wear when they go biking?
A: Their shell-met.

Q: What did the cow say to the turtle in front of him?
A: Get a moove on.

Q: Why did the tired turtle cross the road?
A: To get to the shell station. (Shell is a brand of fuel)

Q: My friend and I went to a turtle pun class yesterday.
A: It tortoise nothing.

Q: What do you call a turtle with six feet?
A: A cockroach.

Q: What type of turtles are the easiest to spot?
A: SEE turtles.

Q: What did the turtle do for her friend’s birthday?
A: Had a shell-ebration

Q: What happens when you cross a turtle with a porcupine?
A: You get a slowpoke.

Q: Where do turtle criminals spend their time?
A: In a shell block.

Q: What kind of photos do self-centered turtles take?
A: Shell-fies.

Q: How do turtles cook their chili?
A: With a slow cooker.

Q: Why is turtle wax so expensive?
A: You can’t get much out of their tiny ears.

Q: How do turtles contact each other?
A: With their shell phones.

Q: How did turtle Elvis get off his back?
A: He rocked and he rolled.

Q: What do you call turtle paparazzi?
A: Snapping turtles. (Paparazzi are photographers who take pictures of famous people)

Q: What was the turtle doing on the road?
A: Holding up traffic.

Knock knock.
Who’s there?
You.
You who?
You see a turtle go by?