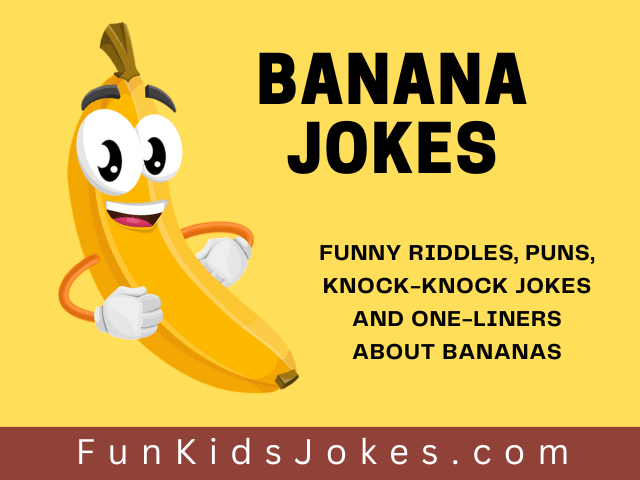 Banana jokes for anytime you want to slip in some banana humor! These Banana Jokes are a-peeling for kids and adults.

Did you know that there are over 1000 different types of bananas in the world? The most popular type of banana, that you commonly see in the supermarket, are called Cavendish Bananas. Lady’s Finger Bananas are the smaller bananas, similar to Cavendish.

These banana jokes for kids are great for parents, teachers, cafeteria workers, farmers, ice cream shoppe workers, children of all ages – and anyone who enjoys bananas.

Q: What do bananas say when they answer the phone?
A: Yellow.

Q: What made the banana such a smoothie?
A: Yogurt!

Q: What kinds of jokes do bananas like to tell?
A: Side-splitting ones.

Q: Where do bananas buy their clothes?
A: Banana Republic.

Q: Why did the banana get so many Valentines?
A: Because it was really sweet.

Q: Why didn’t the banana cross the road?
A: Because it’s a banana – it can’t walk!

Q: In what position was the banana during the Tour de France.
A: He was riding with the peel-oton (“peloton” is the main group of riders during the race)

Q: Why did the gorilla eat the banana?
A: Because it’s a gorilla!

Q: Why did the boy keep falling off his bike?
A: He slipped off the banana seat.

Q: What did one banana say to the other when they first met?
A: Yellow, nice to meet you.

Q: What fruit do sheeps like the most?
A: Baaaaa-nanas.

Q: How do monkeys get down stairs?
A: They slide down the banana-ster.

Q: Why couldn’t the whipped cream find the banana at the party?
A: It split.

Q: Why don’t bananas ever get lonely?
A: They hang around in bunches.

Q: Why was the plantain sent to the pricipal’s office?
A: It wen’t bananas during class.

Q: When will the trail mix have enough money to buy a map?
A: After the banana chips in.

Q: What kind of a key opens a banana?
A: A monkey.

Q: How do you catch King Kong?
A: Climb up a tree and act like a banana.

Q: Why did the farm hand lose his job on the banana farm?
A: He kept throwing the bent bananas away.

Q: Why couldn’t the banana yell high?
A: It could only Yellow.

Student: Our teacher went on a special banana diet.
Classmate: Did she lose weight?
Student: No, but she sure could climb trees.

Q: If a crocodile makes shoes, what does a banana make?
A: Slippers.

Q: What did the apple say to the green banana?
A: You don’t look like you’re feeling so good…

Q: What do you do if you see a blue banana?
A: Try and cheer it up.

Q: Why did the banana go out with the fig?
A: Because he couldn’t find a date.

Q: Why was the banana so sick?
A: He had yellow fever.

Q: What was the ghost’s favorite fruit?
A: Boonanaa.

Q: How is a banana peel on the floor like music?
A: Because if you don’t C sharp you’ll B flat.

Q: How did the unripe banana feel about the ripe banana?
A: It was green with envy.

Q: Where did the banana train to become a relay swimmer?
A: In an olympic-sized cereal bowl.

Q: What is the easiest way to make a banana split?
A: Show it out the door.

Q: Where do bananas go to learn?
A: Sundae school

Q: Why did the monkey like the banana?
A: Because it had appeal.

Q: What did the banana say to the elephant?
A: Nothing. Bananas can’t talk.

Q: What do you call two bananas?
A: A pair of slippers.

Q: Why did the banana fail it’s driving test?
A: It peeled out.

Q: What did the banana do when he saw a monkey?
A: It split.

Q: Why didn’t the young banana go to school this week?
A: Because it didn’t peel well.

Q: Why wouldn’t the banana cross the road?
A: Because he was yellow.

Q: Which day of the week do banana’s like the least?
A: Sundae.

Q: Why did the banana go to the hairdressers?
A: Because it had split ends.

Q: What do you call banana motorcycle policemen?
A: Banana CHiPs

Q: What was the cool banana’s favorite song?
A: Mello Yellow.

Q: How are cereal bananas like cows?
A: They get milked every morning.

Q: What instrument did the banana play in the school orchestra?
A: The Ch-yello.

Q: Why wasn’t the unripe banana named the starter banana football game?
A: He was too green.

Q: How did the baby banana become so spoiled?
A: Mama banana left him out in the sun for too long.

Q: What’s yellow and is used to write letters?
A: A ball-point banana.

Q: Why did the banana go to see the doctor?
A: The banana was not peeling very well.

Q: What is yellow and goes bzzzzzzzzt?
A: An electric banana.

Q: Why don’t bananas snore when they sleep?
A: So they don’t wake up the rest of the bunch.

Q: Which fruit has the most whole grains?
A: The BRANana.

Q: Why was the banana so upset?
A: Someone called him a plantain.

Q: What’s the best thing to put in a banana cream pie?
A: Your teeth!

Q: How do bananas travel?
A: In a yellow submarine.

Q: What is Beethoven’s favorite fruit?
A: Banana..na. Banana..na. (to the melody of the 5th symphony)

Q: What is yellow on the inside and green on the outside?
A: A banana dressed up as a zucchini.

Q: What do fruit use to buy things?
A: Banana bread.

Q: Why did the banana put on suntan lotion?
A: So it wouldn’t peel. 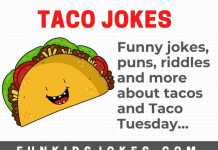 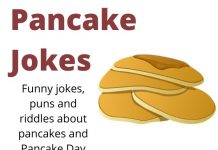 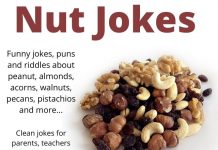 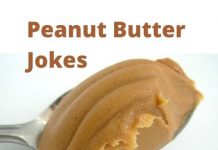 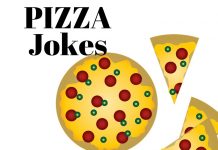