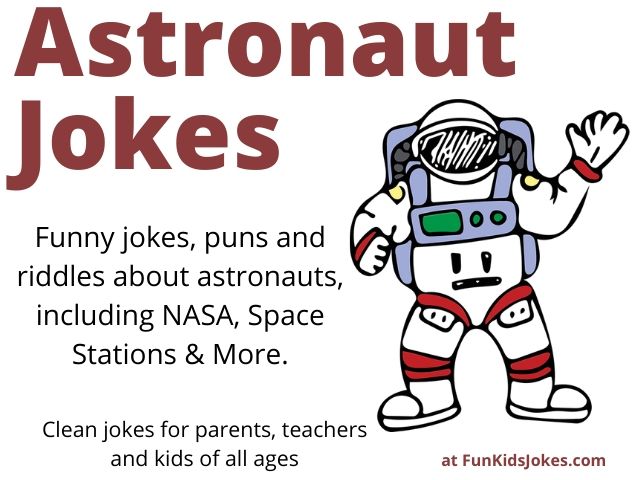 Astronaut jokes for anyone interested in space, science fiction, NASA, space programs, the International Space Station and the history of astronauts.

If you’re looking for clean astronaut jokes, puns, riddles and astronaut knock-knock jokes, then this is the collection for you.

These astronaut jokes are great for teachers, parents, science programs, librarians and children of all ages. They’re also great for astronaut parties or kids dressed up as a space man for Halloween.

Q: Where do astronauts park their ships?
A: Next to a parking meteor.

Q: What do you call a crazy space traveler?
A: An astro-NUT.

Q: Why did Alan Shepard give the restaurant on the moon a poor review?
A: It had no atmosphere…

Q: Why is NASA so interested in light years?
A: They have less calories…

Q: What is Alan Shepard’s favorite dance move?
A: The Moon walk.

Q: Why did William R. Pogue go to court?
A: For a space suit.

Q: Which type of music did John Glenn listen to?
A: Neptunes.

Q: What do astronaut eat their dinner on?
A: Flying Saucers.

Q: Which space launch site has a merry go round?
A: Cape Carnival.

Q: What magazine do Russian astronauts read?
A: Cosmo magazine.

Q: How did astronaut Mae Jemison write poems?
A: In Uni-verses.

Q: What do astronauts wear to formal events?
A: Space suits.

Q. What meal do astronauts eat after breakfast and before dinner?
A. Launch…

Q: What was Gus Grissom using the computer?
A: To update his Spacebook status.

Q: What was Buzz Aldrin’s favorite chocolate?
A: A Mars bar.

Q. How does NASA organize a space mission?
A. They planet.

Q. How does NASA know there is life on Mars?
A. They keep finding parking tickets on the rover.

Q. What is an astronaut’s most-used key on a computer keyboard?
A. The space bar.

Q: Why did the astronaut throw a hamburger on a comet?
A: To make it meateor.

Q. Who was the first deer astronaut?
A. Buck Rogers (male deers are called bucks)

Q: How do astronauts keep their spacesuits from falling down?
A: With asteroid belts.

Q: Why can’t astronauts play golf in outer space?
A: Too many black holes.

Q. What do astronaut use to build walls on the International Space Station?
A. Moon beams.

Q: How do astronauts pay for coffee?
A: The use starbucks.

Q: What do astronauts like to drink while in orbit?
A: Gravi-TEA.

Q: What kind of crazy bugs did Neil Armstrong find on the moon?
A: Luna-ticks.