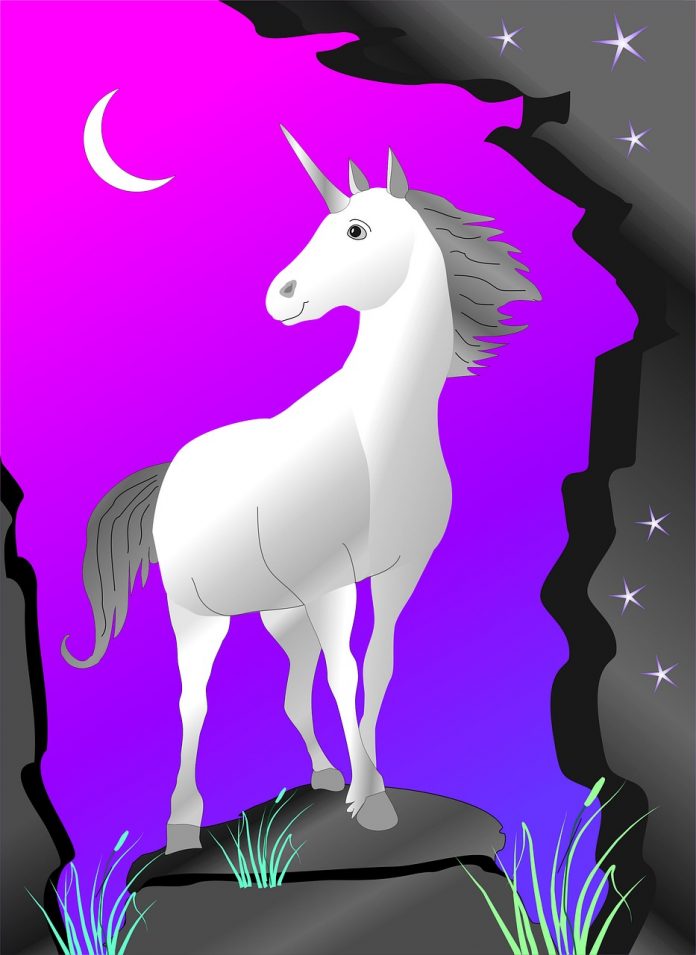 These funny unicorn jokes are sure to bring a smile to anyone who loves unicorns.

This collection of clean jokes about unicorns is great for everyone, including parents, teachers, grandparents, and librarians – and they are safe for children of all ages (just like all of the jokes here at Fun Kids Jokes).

Unicorn parties are very popular, so include some fun unicorn jokes at your party!

Here’s a unicorn party idea: Write some unicorn jokes on little pieces of paper, fold or roll them up, and stick them inside a balloon. Blow the balloon up and tie it off. Play a game of pop the balloon, in which kids sit on a balloon to pop it. When they do, they can read the joke or have an adult read it to them. It’s hilarious!

About unicorns: Unicorns are legendary creatures that have a single large, pointed, spiral-shaped horn coming out of their foreheads. Many times, unicorns are described as beautiful white horses with a single horn. Unicorns do not have wings – similar creatures with wings are called “flying unicorns,” Pegasus or Pegacorns. Unicorns are thought to have many magical qualities, including the ability to fly and heal with their tears.

Q: What did the mythical creature serve at his barbecue?
A: Unicorn on the cob.

Q: What is the difference between a carrot and a unicorn?
A: The first is a bunny feast, the other is a funny beast.

Q: Which state do unicorns like most?
A: Maine.

Q: Why do unicorns like silly jokes?
A: Because they’re uni-corny.

Q: How do unicorns get to the park?
A: On a unicycle.

Q: What street do unicorns live on?
A: Mane Street.

Q: What’s black and white and eats like a unicorn?
A: A zebra.

Q: Why can you always trust what a unicorn says?
A: They’re no bull.

Q: Do they have unicorns at the zoo?
A: Yes – they’re just big, grey and called rhinos.

Q: What do unicorn moms bake on Sunday?
A: UniCorn muffins.

Q: Why do unicorns listen to polkas?
A: They like to hear unicordians.

Q: What did the Unicorn say to the tomato growing in the field?
A: U No Corn.

Q: What do they call the best student at Unicorn University?
A: The A-corn.

Q: What do unicorns call their dad?
A: Pop corn.

Q: Where do naughty unicorns go?
A: Unicourt.

Q: Why did the unicorn want to join the school band?
A: So he could wear a uni-form.

Q: What do unicorns wear when it’s cold outside?
A: UniCorduroy pants.

Q: Why was the unicorn such a good guitar player?
A: He knew all the uni-chords.

Q: What do unicorns use to buy things?
A: UniCorn bread

Q: What didn’t the unicorn trim his eyelashes?
A: He wanted them to match his uni-brow.

Q: What did the baby unicorn say to her mommy?
A: Where’s pop corn?

Q: What is the most mythical vegetable?
A: The unicorn.

Q: What was the unicorns favorite type of a story?
A: A fairy tail.

Q: What do unicorn farmers raise?
A: UniCornish Game Hens.

Q: What cereal do unicorns like to eat for breakfast?
A: Lucky Charms.

Q: Why did the unicorn go to the movies?
A: He liked the book.

Q: What do you call a unicorn with no horn?
A: A horse

Q: What looks like half a unicorn?
A: The other half.

Q: Where do unicorns go to ride the merry go round?
A: A unicorn-ival.

Q: What do unicorns eat for breakfast?
A: Greek yogurt.

Q: What is corn oil use for?
A: To stop unicorns from squealing.

Q: What do you get when you mix a unicorn and a Cow?
A: Corned Beef

Q: Why can’t you take unicorns to the library?
A: They might use their horn.

Q: What mythical creature likes to croak?
A: Unihorn toad.

Q: Whre do unicorns play singles tennis?
A: On the unicourt.

Q: Why was the unicorn able to win all the Pokemon battles?
A: It was legendary.

Q: Why was the unicorn afraid of Jimmy?
A: Because Jimmy cracks unicorns and he don’t care…

Q: How do unicorns know how popular they are?
A: Gallop poll.

Q: How long should a unicorns legs be?
A: Long enough to touch the ground.

Q: How do you get a unicorn to move out the road?
A: Use a unihorn.

Q: What was the unicorn comedian best know for?
A: Unicorny jokes.

Q: What card game do unicorns play?
A: Uno.

Q: What do you get when you cross a werewolf and a unicorn?
A: A corn dog.

Q: Which side of a unicorn has the most hair?
A: The outside.

Q: What do you tell a unicorn after it graduates from college?
A: Corn-gratulations.

Q: How do you know that a unicorn has been in your house?
A: They leave glitter everywhere!

Q: What did the unicorn say when it fell?
A: I’ve fallen and I can’t giddyup.

Knock knock.
Who’s there?
You.
You who?
Unicorn, that’s who!

Knock knock.
Who’s there?
Parton.
Parton who?
Parton me, but have you seen my unicorn.