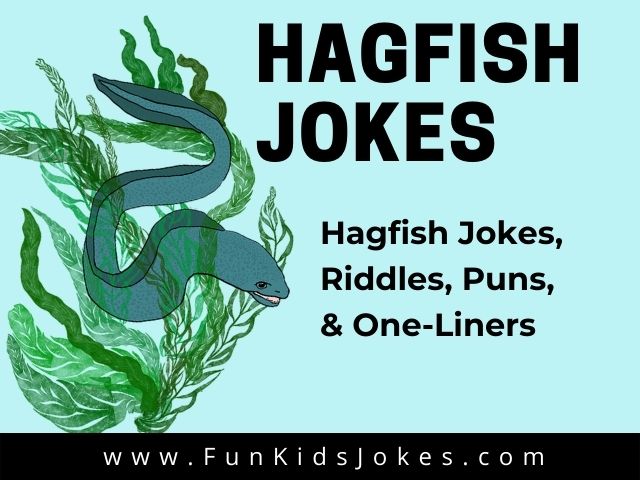 Hagfish are jawless, eel-shaped, slime-producing fish. They are sometimes called slime eels and remain similar to the hagfish who lived 300 million years ago.

In 2009, WhaleTimes founded Hagfish Day to celebrate the “Beauty of Ugly” to show how important all animals are, no matter how unattractive they may be. On the third Wednesday of every October, Hagfish Day brings awareness to the hagfish.

These hagfish jokes are funny anytime – but are especially handy on Hagfish Day.

Q: What did the hagfish say when it was grabbed by it’s tail?
A: That’s the end of me!

Q: What did the slime eel detective say?
A: There’s something fishy going on here.

Q: What do hagfish dress up as for Halloween?
A: Frankenslime.

Q: Where do women Hagfish keep their valuables?
A: In their octopurse.

Q: What do you get if you cross an old lady with a guppie?
A: Hagfish!

Q: What do hagfish say to motivate themselves to get up for work?
A: The eely bird gets the worm…

Q: What is a young hagfish’s favorite game?
A: Slimon says.

Q: What do hagfish use for money?
A: Sand dollars!

Q: Who was the smartest hagfish in history?
A: Ein-slime.

Q: What do hagfish use to build their homes?
A: Slimestone

Q: How do hagfish travel?
A: By seahorse

Q: What did the hagfish police officer say when the robber got away?
A: I’ll get you next slime.

Q: Why don’t hagfish do well on school tests?
A: Because they work below C-Level.

Q: Why did the hagfish cross the road?
A: To get to the other tide.

Q: What brand do trendy hagfish wear?
A: Calvin Slime.

Q: What do hagfish give their sweethearts on February 14th?
A: Valenslimes.

Q: What do you call a hagfish with 3 eyes?
A: A Hagfiiish.

Q: Why don’t hagfish play tennis?
A: Because they’re afraid of the net.

Q: How do you keep a hagfish from smelling?
A: plug it’s nose.

Q: Who cleans up after hagfish?
A: Mermaids

Q: What do hagfish need to stay healthy?
A: Vitamin Sea.

Q: Where do hagfish sleep?
A: In water beds.

Q: What do you call a hagfish in a tuxedo?
A: Very soFISHticated