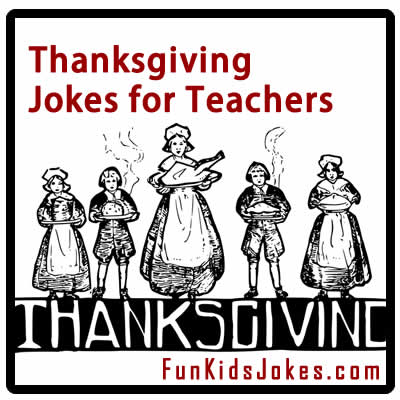 Thanksgiving jokes teachers can use in class for their students during the Thanksgiving holiday season. These clean Thanksgiving jokes, riddles & puns include facts and details that help explain the meaning of the joke to kids of all ages. Perfect for teachers to use in the classroom.

Why are these funny Thanksgiving jokes so useful for teachers to use? Because they include historically significant topics while being funny. We actually include facts along with many of these jokes and riddles to help students make more sense of them.

Q: What do you use to make Thanksgiving bread?
A: May flour. (Flour is used to make bread and the Mayflower was the name of the ship the Pilgrims sailed in)

Q: What kind of tan did pilgrims get?
A: Puritan. (Puritans are members of a group of English Protestants from the late 16th and 17th centuries)

Q: Where did they take the Mayflower when it was sick?
A: The nearest doc. (The Mayflower was the ship used to sail to America. “Doc” is short for doctor, and “dock” is where ships park)

Q: How did Mayflower sailors say hello to each other?
A: They waved. (the Mayflower was a ship that sailed on the ocean, which has waves)

Q: Why was the turkey in jail?
A: Fowl play. (Guineas, geese, chickens, pigeons, and turkeys are known as “fowl” and “foul play” is when laws are broken.)

Q: What kind of face do pilgrims make when they’re in pain?
A: Pil-grimace. (A grimace is an ugly, twisted expression on a person’s face. “Pil-grimace” is a pun, which is a play on words)

Q: If April showers bring May flowers, what do May flowers bring?
A: Pilgrims. (The Mayflower was a ship used by the Pilgrims, May flowers are flowers that grow in May)

Q: What do you call it when it rains turkeys?
A: Fowl weather. (turkeys are known as “fowl” while “Foul Weather” means the weather is bad)

Q: What’s the smallest unit of measurement in the pilgrim cookbook?
A: Pilgram. (A gram is a metric unit of mass equal to one thousandth of a kilogram. Pilgram is a pun.)

Q: What do space station turkeys say?
A: Hubble, Hubble, Hubble! (The Hubble Space Telescope is a space telescope that was launched into low Earth orbit and remains in operation. Turkeys are known to say “gobble, gobble, gobble”)

Q: What do you get when you cross a Pilgrim with a cracker?
A: A Pilgraham. (graham crackers are a type of cracker)

Q: What’s the best dance to do on Thanksgiving?
A: The turkey trot. (The Turkey Trot was a dance done to fast ragtime music)

Q: If there were still Pilgrims alive today, what would they be famous for?
A: Their age! (the Pilgrims arrived in 1620 – about 400 years ago – so being alive would make them very famous)

Q: What’s a Pilgrim’s mother called?
A: Pilgranny. (Granny is a term used for a grandmother. “Pilgranny” is a pun.)

Q: Why did the music band need a turkey?
A: Because he had the drumsticks! (Drum sticks are used for percussion. Drum sticks are also what cooked turkey legs are called)

Q: What do you get when you cross a turkey and a harpsichord?
A: A turkey that can pluck itself! (A harpsichord is a musical instrument played with a mechanism that plucks one or more strings. Feathers are “plucked” from turkeys.)

Q: If pilgrims travel on the Mayflower, then what do college students travel on?
A: The Scholar Ships. (A scholarship is a reward or contribution made for a student to use towards further education based on their accomplishments. The Mayflower was a ship used by the Pilgrims.)

Q: What kind of music did the Pilgrims like to listen to?
A: Plymouth Rock. (Plymouth Rock is where the Mayflower Pilgrims who founded Plymouth Colony in 1620 landed. “Rock” is a style of music.)

Q: What kind of cars would Pilgrims drive today?
A: Plymouth. (Plymouth was a brand of automobiles made by Chrysler until 2001. Plymouth was also where the Pilgrims landed.)

Q: What was the Scarecrow’s favorite fruit?
A: Straw-berries! (Scarecrows are typically filled with straw or hay)

Q: What did the baby corn say to mama corn?
A: Where’s pop corn?

Q: What smells the best on Thanksgiving?
A: Your nose.

Q: What do you wear to Thanksgiving dinner?
A: A Har-VEST. (Harvest refers to when crops are ready to be taken)

Q: What was the pumpkin’s favorite sport?
A: Squash (pumpkin is a type of squash).

Q: Why did the turkey sit on the tomahawk?
A: To hatchet. (a tomahawk is a type of single-handed ax)

Q: Why shouldn’t you look at the turkey dressing?
A: Because it will make it blush. (“turkey dressing” is another way of saying turkey stuffing).

Q: When did Mayflower sailors eat dinner?
A: Maritime. (Maritime refers to living or found in or near the sea.)

Q: Why was the Mayflower sailor put in a time-out?
A: He was naughty-cal. (Nautical is of or concerning sailors or navigation. “Naughty-cal” is a pun.)

Q: What do you get when you cross a turkey with a centipede?
A: Drumsticks for everyone on Thanksgiving Day! (Centipedes have multiple legs, cooked turkey legs are called drumsticks.)