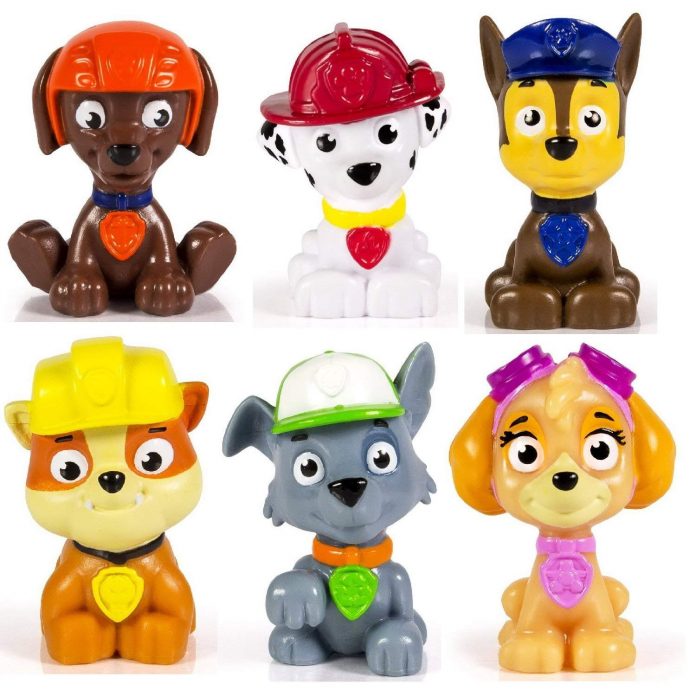 If you’re searching for funny jokes about PAW Patrol, then you’re going to love this collection. We have Paw Patrol riddles, puns and knock-knock jokes that will be the hit of the party.

You’ll find jokes about all the main characters, including Skye, Zuma, Rocky, Chase, Rubble, and Marshall. You’ll also find some other characters, like Chickaletta and the Kitten Catastrophe Crew.

These jokes are fun for elementary school teachers, kids, parents and any fans of PAW Patrol. Grab a few and tell them at breakfast or during a car ride – and share some laughs with the little ones in your life.

Q: What do Australians call Marshall when he makes a silly mistake?
A: A dingo-ling

Q: What does the Paw Patrol call in to track down flowers?
A: A bud hound

Q: Which city does the PAW Patrol like the most?
A: New Yorkie

Q: How did the PAW Patrol move to a new headquarters?
A: In a Ryder truck.

Q: How do you catch a lost member of PAW Patrol?
A: Hide behind a tree and make a noise like a bone

Q: How does Chickaletta send mail?
A: In hen-velopes.

Q: Why did Marshall stay in the shade?
A: So he wouldn’t turn into a hot dog.

Q: What did Rubble say to the flea?
A: Stop bugging me.

Q: What does Zuma like for breakfast?
A: Pooched eggs.

Q: Why was the Kitten Catastrophe Crew scared of the tree?
A: Because of its bark.

Q: What was it called when the Kitten Catastrophe Crew won the dog show?
A: A cat-has-trophy.

Q: What’s more amazing than a talking dog?
A: A spelling bee.

Q: Where does Chase from PAW Patrol sit?
A: Anywhere he wants to.

Q: How are Zuma and a marine biologist similar?
A: Zuma wags a tail while the other tags a whale.

Q: How did the tiny Scottish dog feel when he saw a Great Dane?
A: Terrier-fied.

Q: What do you call Skye when she’s cold?
A: A Chili Dog.

Q: What did the waiter say to the PAW Patrol crew?
A: bone-appetit!

Q: How can tell when Chase is being lazy?
A: He only chases parked cars.

Q: What happened when the PAW Patrol went to the flea circus?
A: They stole the show.

Q: What do you get when you cross Chickaletta with a duck?
A: A chicken that lays down.

Q: What do you get when you cross a sheepdog with a tulip?
A: A collie-flower.

Q: Where did Rocky go when his tail fell off?
A: A re-tail store.

Q: What do you call Zuma when he’s freezing cold?
A: A pupsicle.

Q: What do you get when you cross a gold dog with a cell phone?
A: A golden receiver.

Q: Why did the Marshall cross the road?
A: To get to the barking lot.

Q: Why did the Chase cross the road twice?
A: He was fetching a boomerang.

Q: Why did Chickaletta cross the construction site?
A: To see Rubble lay a brick.

Q: What kind of dog loves taking baths?
A: The shampoodle.

Q: What do you call Zuma when he’s wearing a Timex?
A: A watch dog.

Q: What does Rubble and an iphone have in common?
A: They both have collar I.D.

Q: What do you call Zuma when he’s doing a magic show?
A: A labracadabrador.

Q: How does the PAW Patrol stop a DVD from playing?
A: They press the PAWs button.

Q: Why do PAW Patrol members Marshall, Chase and Zuma answer the most questions in school?
A: They’re all first responders.

Q: What kind of car does the PAW Patrol chase the most?
A: Catillacs.

Q: During which month does Marshall bark the least often?
A: February, because it’s the shortest month.

Q: Can a Chase give a high five?
A: It’s PAWsible…

Q: How is Rocky like a coin?
A: It has a head on one side and tail on the other

Q. Why did Chase cross the road?
A. Chickaletta couldn’t be bothered.

Q: What does Rubble call his father’s father?
A: Grand-PAW

Q: What does Skye wear when she sleeps?
A: PAW-jamas!

Q: If the lights run on electricity and cars run on gas, then what does Chase run on?
A: His Paws.

Q: What state has the most dogs living in it?
A: Petsylvania

Q: What do you get when you cross Marshall with Kris Kringle?
A: Santa Paws.

Q: What do you call a painting of a Zuma?
A: A PAW-trait

Q: Why is Rocky such a terrible story teller?
A. Because he has only one tail.

Q: Why is it so hard for Marshall to play hide and seek?
A. Because he’s always spotted.