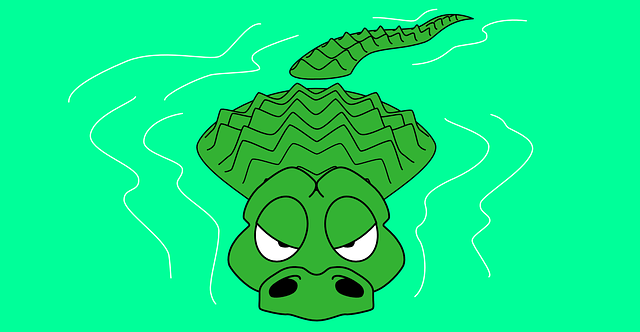 Crocodiles are large, aquatic reptiles (which means they live in and near water). They can live up to 100 years, can weight over 1000 pounds and some can run over 20 miles per hour. That’s pretty fast!

These jokes about crocodiles are great for parents, teachers, zoologists, biologists and anyone who enjoys nature, animals and – crocodiles! Even the term crocodilian is kind of funny when you say it!

And while these crocodilian jokes are funny, it’s not funny that many species of crocodile are at the risk of extinction and are classified as critically endangered (see how you can help save crocodiles).

Q: What’s the similarity between a Crocodile and a computer?
A: They both have bytes!

Q: How many arms does a crocodile have?
A: It depends on how many people it’s caught.

Q: Why don’t crocodiles like fast food?
A: It’s too hard to catch.

Q: What do crocodiles call small people?
A: Appetizers.

Q: Who gives crocodiles presents on Christmas?
A: Santa Jaws

Q: Where do you find croc food at the pet store?
A: In the croco-aisle.

Q: What’s the difference between a dog and a crocodile?
A: The dog’s bark is worst than his bite.

Q: What do you get when you cross a crocodile with a rooster?
A: A croc-a-doodle-doo.

Q: Why should you never double-cross a crocodile?
A: It might come back to bite you in the end.

Q: What do crocodiles order at Starbucks?
A: Jaw-va

Q: What do you call a crocodile who starts arguments?
A: An Instigator.

Q: How does a crocodile smell?
A: With it’s nose.

Q: What do you call a group of crocs sleeping on top of each other?
A: A croco-pile.

Q: Did you hear about the crocodile who became a congressman?
A: He was an expert dele-gator.

Q: What do you call a reptile that works on a farm? A: An irri-gator.

Q: How does a crocodile taste?
A: With it’s mouth.

Q: What does a crocodile feel like?
A: A crocodile.

Q: What looks like half a crocodile?
A: The other half.

Q: Why are crocs so cool?
A: They have croco-style.

Q: Which side of a crocodile is the greenest?
A: The outside.

Q: How do you know when a croc is happy?
A: They croco-smile.

Q: Why did the crocodile cross the road?
A: To catch the chicken.

Q: What do crocodiles wear on their feet?
A: Crocs. (Crocs is a brand of shoe)

Q: What did the policeman say when the crocodile denied eating the chicken?
A: That’s a croc.

Q: How do reptiles turn up the heat?
A: They turn the croco-dial.

Q: What do you call a croc with salsa and cheese on it?
A: A Taco-dile.

Q: What lawn game do crocodiles play?
A: Croc-quet.

Q: How did the crocodile get to the moon?
A: On a cRocket.

Q: What do you get when you cross a crocodile with a chocolate bar?
A: Chocodile.

Q: Which type of crocodile loves Snow White, the movie?
A: Dwarf crocodile (Type of croc who lives in Western Africa)

Q: What do you call a large reptile who robs banks?
A: A crook-adile.

Q: Which reptile did Draco Malfoy team up with at Hogwarts?
A: Croco Dilian

Q: Which type of crocodilian jumps out of dark alleys?
A: Mugger crocodiles (crocodile from the Indian subcontinent and surrounding countries)

Q: What was the name of the Vulcan croc?
A: Spockodile.

Q: Why do crocodiles like dessert?
A: It’s crocodile-icious.

Q: Why do tourists like to look at crocodiles?
A: Crocodiles have a cute senses.

Q: How can you tell when a crocodile is tired?
A: It has handbags under it’s eyes.

Q: How long does it take a crocodile in the shower?
A: A croco-while.