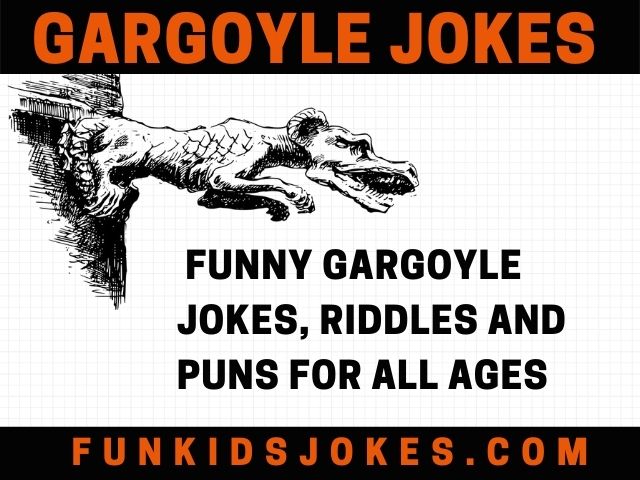 Gargoyles in monster stories are inspired by the typically stone gargoyles used in architecture.

These clean gargoyle jokes for kids and adults of all ages are perfect for Halloween or anytime.

There are a number of gargoyle myths from various regions, mainly Europe. Some believe that gargoyles serve to frighten away evil spirits. Stone gargoyles are seen as being able to come to life.

In France, there is the legend of the Gargouille, which was a fire-breathing dragon with wings and a long neck that was believed to scare away evil.

In reality, gargoyles actually serve as a way to divert water. Most gargoyles you see on a roof top will spout water from their mouth when it rains!

These Gargoyle jokes are perfect for parents, teachers, children, horror story fans, historians and history buffs, people interested in architecture and anyone who sees a gargoyle looking at them.

Q: What musical keeps Gargoyles entertained?
A: Fiddler on the Roof

Q: Why was the gargoyle cast as a lifeguard for the beach movie?
A: He had a chiseled physique.

Q: Why did the gargoyle get sent to the principals office?
A: For spouting off at the teacher.

Q: Why was the gargoyle a poor bowler?
A: He always ended up in the gutter.

Q: How do statues order their eggs?
A: Gargboyled…

Q: Why was the statue holding a bottle of mouthwash?
A: To gargoyle with…

Q: What did the gargoyle say when there was a knock on the door?
A: Is-tat-you?

These Gargoyle Jokes are Extra Funny

Q: What do you call a Gargoyle who is given everything it wants?
A: Garspoiled.

Q: What sound does a gargoyle make when sneezing?
A: Stat-choo!

Q: Why was the gargoyle knocking at the door?
A: To sell goyl scout cookies.

Q: What do you get when you press a Garg?
A: Gargoyle.

Q: What’s hairy and watches from the tops of Caribbean buildings?
A: A coconut gargoyle.

These Gargoyle Jokes are Great for Teachers

Q: Why won’t a gargoyle laugh at these jokes?
A: Because they are stone-faced.

Q: Who did the statue bring to the prom?
A: His gargoyle-friend.

Q: Where do gargoyles go to school?
A: Monsters University.

Q: What’s made of stone and can protect your eyes?
A: Goggoyles.

Knock, knock.
Who’s there?
Gargoyle.
Gargoyle who?
Gargoyle with salt water and your throat might feel better.

Knock, Knock.
Who’s there?
Chuck.
Chuck who?
Chuck to see if the gargoyles are gone.

Knock, knock.
Who’s there?
Gargoyle.
Gargoyle who?
Gargoyle is what I use in my salad dressing.

Knock Knock
Who’s there?
Hayden.
Hayden who?
Hayden out so the gargoyle doesn’t see me.

Knock, Knock.
Who’s there?
Butter.
Butter who?
Butter watch out for that gargoyle!

Knock Knock.
Who’s there?
Terri.
Terri who?
Terrified of gargoyles…