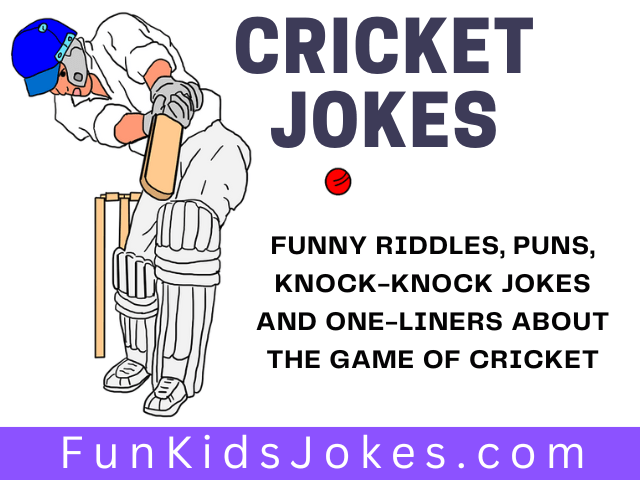 Cricket jokes that include cricket riddles, puns and knock-knock jokes about the sport of cricket.

This is the best collection of cricket jokes in the world.

These cricket jokes are especially great for parents, cricket players, coaches and fans – but they are fun for everyone who enjoys watching or playing cricket (which was originally called creckett).

Q: Why did the cricket team watch Battlestar Gallactica?
A: To see the Centurions.

Q: What do cricket players like to order at French restaurants?
A: Chicken Cordon Blue

Q: What is the stinkiest part of a cricket pitch?
A: Cow corner.

Q: Why did the cricket player get his piano tuned?
A: There was a drop-in pitch.

Q: How do cricket players find things online?
A: They Googly it.

Q: What sport do insects love to watch?
A: Cricket.

Q: Why can’t elephants play cricket?
A: Because they block the wickets.

Q: Why did the cricket bowler never sweat?
A: He was surrounded by fans.

Q: Why are so many cricket players used car salesmen?
A: They’re good with the pitch.

Q: Which cricket player always wears black?
A: Wickets Witch of the West

Q: What does a cricket player have in common with a magician?
A: They both do hat tricks.

Q: Where did Lasith Malinga go to dance?
A: The cricket ball

Q: Which cricket player is a super hero?
A: The Batman.

Q: What did the cricket player say when he met the centurian?
A: Hoodoo you do?

Q: Why was the cricket team looking for rabbits to play for them?
A: They wanted a player with a great long hop.

Q: What do you give a sick cricket player?
A: Chicken Nurdle Soup.

Q: Why did the cricket player smash the ice cream sundae?
A: There was a red cherry on top.

Q: Why didn’t the cricket player show up for work?
A: He was a Striker.

Q: Why was the cricket player also the prison warden?
A: He was a wicket-keeper.

Q: Why is it hard to win a cricket match in South Africa?
A: Because the cheetahs are a protected species there.

Q: Why are singers good at cricket?
A: They have a perfect pitch.

Q: Why was the tiny ghost asked to join the cricket team?
A: They needed a little team spirit.

Q: What do cricket players do when they get overheated?
A: They get closer to one of the fans.

Q: Why are centipedes not allowed to play on bug cricket teams?
A: It takes too long to put their cricket shoes on

Q: Why is a cricket umpire like an angry chicken?
A: They both have fowl mouths.

Q: When should cricket players wear armor?
A: When they play knight games.

Q: What is it called when a T-Rex gets runs in cricket?
A: A dino-score

Q: Why shouldn’t you play cricket in the jungle?
A: There are too many cheetahs!

Q. Why did the cricket player bring string to the game?
A: So he could tie the score

Q. What runs around a cricket field but never moves?
A: A fence

Q: Why did the chicken get ejected from the cricket game?
A: For persistent fowl play.