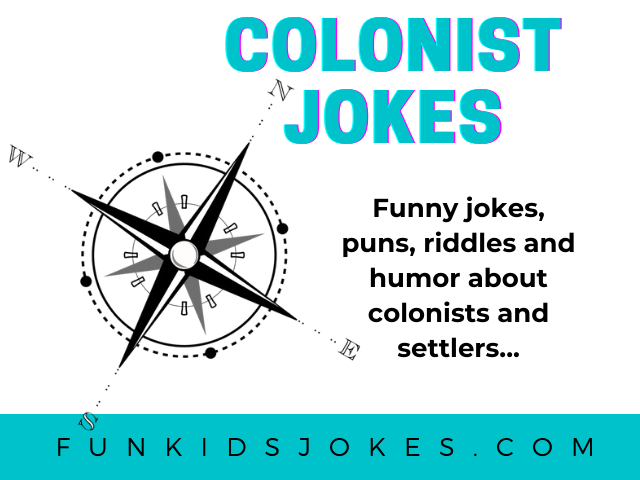 Colonist jokes are fun during Thanksgiving holiday and are great for history class. These clean colonist jokes include jokes about settlers and Pilgrims. They are popular with Social Studies teachers, history fans, parents, adults and kids – especially children who enjoy exploring and history.

A colonist is a person who moves to an area and then settles there. You may also be interested in our Thanksgiving Jokes, Pilgrim Jokes and History Jokes.

Q: Why were the settlers so fragrant?
A: They were cologne-ists.

Q: How were the first Americans like ants?
A: They also lived in colonies.

Q: What meal did Pilgrims serve their army?
A: A MylesStan dish (Myles Standish was a military adviser for Plymouth Colony)

Q: What did the colonists do after finishing their meal when dining out?
A: Settled up.

Q: Where do colonists always land?
A: On their feet.

Q: How did the Pilgrims bring their cows to America?
A: On the Mooooo-flower.

Q: Why are colonists such poor baseball players?
A: They don’t go back home.

Q: What did colonists wear at the Boston Tea Party ?
A: T-Shirts.

Q: What did the colonists do because of the Stamp Act?
A: They licked the British.

Q: What kind of music did the Pilgrims listen to?
A: Plymouth Rock

Q: Why did the Native Americans hunt bear?
A: They didn’t – they wore clothes!

Q: Why did the Pilgrims want to set sail during the spring?
A: Because April showers bring May flowers.

Q: If pilgrims travel on the Mayflower, then what do college students travel on?
A: The Scholar Ships.

Q: What kind of cars would pilgrims drive today?
A: Plymouths.

Q: Why didn’t the two early settlers get along?
A: They had a history together…

Q: Why did the first newspaper started by Pilgrims fail?
A: They thought they were columnists, but they were actually just colonists.

Q:What kind of tan did pilgrims get?
A: Puritan.

Q: What kind of tea were American colonists searching for?
A: Liberty.

Q: What did vampire Pilgrims call Thanksgiving?
A: Fangs-giving.

Q: What did Pilgrims put in their pumpkin pie?
A: Their teeth.

Q: Could Pilgrims jump higher than their houses?
A: Of course – houses can’t jump at all.

Q: Why did the Pilgrim band need a turkey?
A: For the drumsticks!

Q: What did the Pilgrim wear to Thanksgiving dinner?
A: A Har-VEST.

Q: What did the young Pilgrim say when his Mom wanted his help to fix Thanksgiving dinner?
A: But I didn’t break it!

Q: What did the Pilgrims get when they crossed a turkey with a ghost?
A: A poultrygeist!

Q: Why did the turkey cross the ocean?
A: To get to the other side.

Q: What did King George think of American colonists?
A: He felt they were revolting.