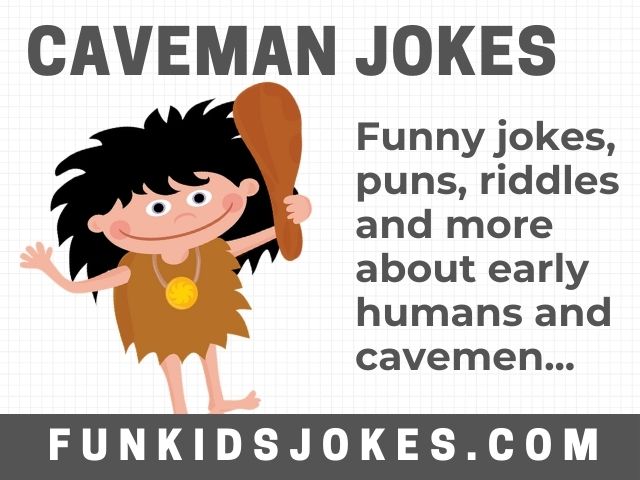 Caveman Jokes, caveman riddles, and caveman puns for kids and adults of all ages. Everyone can enjoy this collection of jokes about cavemen and humor about prehistoric man.

Some popular cartoons, shows, characters and comic strips relating to caveman include Captain Caveman, Land of the Lost, Fred and Wilma Flintstone, Barney and Betty Rubble, the BC Comic Strip and the caveman character from Geico TV commercials.

If you’re looking for fun clean caveman jokes, then this is for you. These jokes about early humans are great for parents, teachers, kids and adults of all ages.

Q: What do they call a caveman who takes a winding path when he walks?
A: A Meander-thal

Q: Which movie do cavemen dislike most?
A: Ice Age.

Q: Who did all the counting for caveman?
A: The woolly mam-MATHs

As the early humans sat next to each other, they couldn’t help but think: We need to talk…

Q: What would you cavemen who were still around today?
A: Zombies!

Q: Why couldn’t the caveman get into the cave?
A: It was Grimlocked! (Grimlock is a dinosaur character from Transformers)

Q: What did they serve at the caveman restaurant?
A: A CLUB sandwich.

Q: What did the caveman say after getting scratched by the saber-toothed tiger?
A: Me-OW!!

Q: How do you describe caveman jokes?
A: Pre-hysterical!

Q: How do you describe an early human with a hankering for something?
A: A CRAVEman

Q: Which early humans were scared of everything?
A: CRAVENman (craven means cowardly or not brave)

Q: What makes more noise than a caveman?
A: Two cavemen!

Q: What couldn’t the caveman fall asleep?
A: Too many dino-snores outside his cave.

Q: How many eyes did caveman have?
A: None (the word caveman has no letter “i” in it)

Q: Where did the caveman shop for games?
A: Toysaurus (toys-r-us)

Q: What do Cavemen eat on camping trips?
A: Dino-smores.

Q: What did cavemen dig out their caves?
A: They used DINO-mite

Q: What did the caveman get when a dinosaur walked through his strawberry patch?
A: Strawberry jam

Q: What time was it when the dinosaur found the caveman’s cave?
A: Time to find a new cave.

Q: How did the caveman feel after eating a duck?
A: Down in the mouth

Q: Why didn’t the caveman cross the road?
A: There weren’t any

Q: Which pre-historic animal were caveman most afraid of?
A: The TERROR-dactyl

Q. Why did cavemen play so much golf?
A. They all had the clubs…

Q: What did the caveman get when he crossed the pig with a dinosaur?
A: Jurassic Pork!

Q: What did cavemen use to cut wood?
A: A dino-saw

Q: Who made all the caveman’s clothes?
A: The dino-sewer

Q. Which early human was able to fly?
A. CROW-Magnon Man.

Q: Who maintained law and order during prehistoric times?
A: Tricera-cops

Q. Why was the shortest class in caveman school?
A. History class (because they were pre-historic).

Q: Where did the caveman buy groceries?
A: At a dino-store

Q. What did the caveman say when he saw a pterodactyl flying around?
A. Look at that dino soar…

Q: What did cavemen have in their playgrounds?
A: Dino-see-saurs

Q. Which type of music did cavemen like most?
A. Rock.

Q: How many cavemen could fit in an empty cave?
A: One. After that, the cave isn’t empty anymore

Q. Which newspaper did Neanderthals read?
A. The Prehistoric Times.

Q: Which brand of clothing did caveman wear?
A: Fossil

Q. What do you say when a caveman arrives to your party too soon?
A. You’re early, man.

Q: Where was the caveman after the sun went down?
A: In the dark

Q: Why did they caveman need to wash up?
A: He Ex-Stinked

Q: Why didn’t the caveman trust the ocean?
A: There was something fishy about it