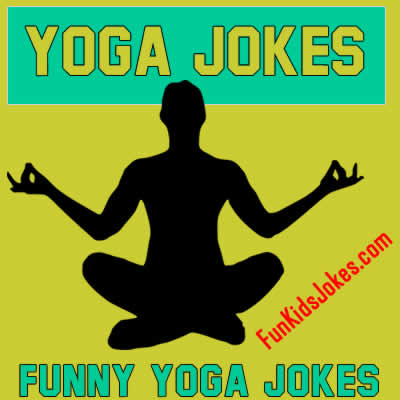 These clean yoga jokes are for kids and adults of all ages. They are great for parents, teachers, yoga instructors, yoga students, yogi, gurus and anyone else looking to share a laugh about yoga.

Yoga is a Hindu spiritual and ascetic discipline which includes breath control, meditation, and bodily postures, widely used for health and relaxation.

Yoga jokes are especially fun on the way to, or back from, a yoga class. They are also great for children being taught yoga.

If you really like yoga, or have friends and family who do, then share these jokes and this page so they can enjoy them.

Q: Who taught the park ranger how to do a downward facing dog?
A: Yogi Bear.

Q: Why didn’t the yoga guru use the vacuum?
A: Because he has no attachments.

Q: What does a dyslexic cow say at yoga class?
A: Oooooooom.

Q: What does a “help wanted” sign for a yoga instructor say?
A: Inquire Within.

Q: Why was the woman so angry after yoga class?
A: She was bent all out of shape.

Q: How did the yogi order his pizza?
A: Make me one with everything.

Q: Which type of animal enjoys yoga?
A: A Shangri-llama.

Q: What movie featured Captain Jack doing yoga?
A: Pilates in the Caribbean.

Q: What did the yogi do every night before bed?
A: He let the dogma out.

Q: Which famous baseball player said Namaste after each game?
A: Yogi Berra

Q: What do Yogi policemen say to robbers?
A: You have the right to remain silent…

Q: What did the guru eat every morning?
A: Granola with yogi-urt.

Q: How do yogi greet each other in Maine?
A: NaMooseStay

Q: How is yoga class like kindergarten?
A: You get to roll out a mat and lay down.

Q: What did the yogi say to the pizza maker?
A: Make me one with everything.

Q: What yoga pose do pirates love to hate?
A: The plank.

Q: How do yogi get home?
A: They drive their karma.

Q: What did the police officer say to the Yogi who broke the law?
A: You have the right to remain silent.

Q: Why was the man so angry after yoga class?
A: I don’t know, but he sure was bent out of shape.

Q: Why couldn’t the yogi find any coins outside?
A: Because change comes from within.

I didn’t think yoga would help with my poor posture… but I now stand corrected.

The donut had a hard time focusing in yoga class… I guess it just couldn’t find it’s center.

My friend says he’s the fittest person in our yoga class… but I think that’s a bit of a stretch.

I’m heading down to the yoga clinic looking for a job… they may have open positions.

The photos I took in yoga class didn’t come out good at all… I think they were over-ex-POSED.

My schedule is a bit busy but my yoga instructor always finds a way to fit me in… I’m glad she’s so flexible.

I thought the yogi would be driving a Toyoga, but he was driving a Mercedes Bends instead.

My yoga instructor asked me for a loan… now that was an awkward position to be put in.

Q: What did the yogi want for his birthday?
A: Presence.

Q: What did the yogi say when asked for birthday gift ideas?
A: I wish for no gifts, only presence.

Q: What did Dorothy say after yoga class?
A: There’s no place like om.

Q: What do you call a bagel doing yoga?
A: A pretzel.

Q: What did the optimistic guru say?
A: Hatha yoga is better than none.

Q: What did Fred Flintstone’s pet say after yoga class?
A: Dino-sore.

Q: What do children call yoga?
A: Twister!

Knock knock.
Who’s there?
Yoga.
Yoga who?
Yoganna be disappointed by this knock knock joke.