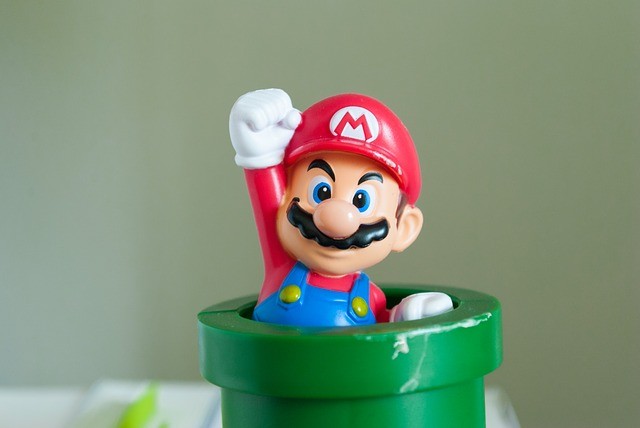 This collection offers the best Super Mario Brothers jokes – and they’re sure to put a smile on the face of any Nintendo fan.

You’ll find jokes about Mario, Luigi, Bowser, Princess Peach and lost of the characters from the most popular video game in history. These jokes are also clean and safe for people of all ages.

Fun for anyone who loves playing Super Mario Brothers games, including the original Nintendo Mario Bros. and new handheld versions for DS.

These Super Mario jokes are also great for people who enjoyed the Mario Brothers TV show.

Q: Which room is Mario too big to fit inside of?
A: A mushroom.

Q: How to Koopas communicate?
A: They use a Shell-phone!

Q: How do you describe a koopa troopa birthday party?
A: It’s always a big shellabration.

Q: What does Wart drink when it’s cold?
A: Hot Croako.

Q: How do bad guys in Marios Bros. surf the internet?
A: With web Bowsers.

Q: What dessert do they serve in Super Mario Bros?
A: Princess Peach Pie

Q: What is Warts favorite game during recess?
A: Hop-scotch.

Q: Who builds everything in Mario Bros. world?
A: The Hammer Brothers.

Q: Why isn’t there poison ivy in Super Mario Bros?
A: To avoid any gl-itches.

Q: What do you call a Mario Bros. character on strings?
A: A Mario-nette.

Q: Why did mario cross the road?
A: He couldn’t find the warp zone.

Q: What does Koopa like with his hot wings?
A: Shellery and blue cheese.

Q: What kind of music does Wart like to listen to?
A: Hip Hop.

Q: What does Bowser and the desert level have in common?
A: Both have angry suns.

Q: What .io game does Princess Peach play?
A: Mar.io

Q: Why did Luigi say to the Koopa on the cloud?
A: Look at you! (Lakitu)

Q: What did Mario use to talk to the Boo?
A: A Lu-OUIJA Board

Q: Why was Mario coughing so much?
A: Something went down the wrong tube…

Q: Why is Toad invited to every party?
A: Because he’s a Fun-gi.

Q: Who is the Hammer Bros. favorite singer?
A: MC Hammer.

Q: What did the Koopa wear on it’s head?
A: A shellmet.

Q: Why did the two ghosts attack Mario?
A: To give him a boo-boo.

Q: What does Princess Peach use to get things off the high shelf?
A: A toad stool.

Q: What basketball team do Koopas cheer for?
A: The Shelltics.

Q: What does King Koopa use to research things?
A: A web bowser.

Q: Why couldn’t Toad put a pool table in his house?
A: It took up too mush-room.

Q: Which band is a favorite of King Koopa?
A: Sha Na Na – because of Bowser!

Q: What is Luigi’s favorite move in basketball?
A: A jump shot.

Q: Where does Lakitu store his digital photos?
A: In the cloud.

Q: What did Mario say to Princess Peach in the underground?
A: I Lava You.