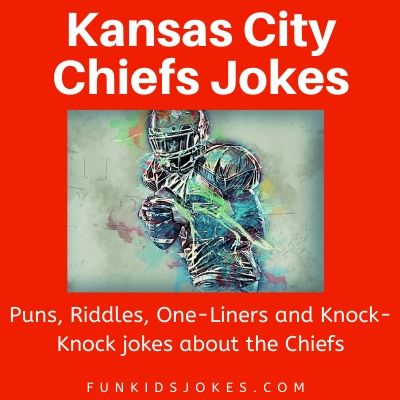 This is the best collection of jokes about the Chiefs NFL team you’ll find anywhere.

Not only are these Kansas City Chiefs jokes funny, but they are clean and safe for all ages. These jokes are especially great for parents, teachers, coaches, children, K.C. Chiefs fans and NFL fans – but they are fun for anyone who enjoys football.

You can also check out our collection of football jokes here: American Football Jokes.

Q: Why was Otis Taylor nicknamed “Bad News?”
A: Everyone knows that bad news travels fast.

Q: How do the Chiefs hire their players?
A: With stilts…

Q: What’s the hardest thing about being a Kansas City quarterback?
A: The ground!

Q: What’s as big as Derrick Thomas, but weighs nothing?
A: His shadow.

Q. What’s the difference between Tony Gonzalez and a duck?
A. One goes quick and the other goes quack.

Q: What did the Kansas City fan do when his team won the Super Bowl?
A: He turned off his XBox.

Q: What’s the difference between a Chiefs fan and a puppy?
A: The puppy eventually grows up and stops whining.

Q: How many Chiefs players does it take to win a Super Bowl?
A: Only one… but Len Dawson retired.

Q: What do Chiefs fans and horse flies have in common?
A: They’re both annoying.

Q: How does a Chiefs quarterback get signals from the sideline?
A: Smoke signals.

Q: What does every Chiefs player do on their birthday?
A: They get older!

Q: Why do the K.C. Chiefs draft ballet dancers as their kickers?
A: They know how to split the uprights!

Knock Knock.
Who’s there?
Harry?
Harry who?
Harry up and throw the ball, they’re coming right at you!

Q: Why did the Buck Buchanan (Chiefs Defensive Lineman) get heartburn after eating birthday cake?
A: He forgot to take off the candles.

Q. Why did Nick Lowery (kicker for the Chiefs) bring string to the game?
A: Just in case he needed to tie the score

Q. What runs around Arrowhead Stadium but never moves?
A: A wall

Q: What was Chiefs kicker Nick Lowery always trying to do?
A: Reach goals.

Q: Who walks back and forth screaming one minute, then sits down weeping uncontrollably the next?
A: Hank Stram – former coach of the Kansas City Chiefs football team

Q: Why do Kansas City football players cry when they lose?
A: They’re a bawl club.

Q: What is harder for a Chiefs receiver to catch the faster he runs?
A: His breath!

Knock Knock
Who’s there?
Hanna.
Hanna who?
Hanna ball off to me!

Q: What do Chiefs players lose every night?
A. Their shadows.

Q: What can Chiefs players catch at Mile High Stadium?
A: Bronco-itis

Q: What did Chiefs fans think about the new stadium lights?
A: They gave it GLOWING reviews.

Q: When should Kansas City football players wear armor?
A: When they play knight games.

Q: What is as big as Jack Rudnay (Chiefs center), but weighs nothing?
A: His shadow.

Q: What do you get when you cross the Patrick Patrick Mahomes (Chiefs quarterback) with a carpet?
A: A throw rug.

Q: What’s the difference between the Chiefs and water?
A: Water runs.

Knock Knock
Who’s there?
Hans.
Hans who?
Hans to the face is a penalty…

Q: What did Otis Taylor say to the football before the game?
A: Catch you later.

Q: Did you hear about the joke that Trent Green told his receivers?
A: It went over their heads.

Q: What do players do when they get overheated at Arrowhead Stadium?
A: They get closer to the fans.

Q: Why can’t Patrick Mahomes use his phone?
A: Because he can’t find the receiver.

Q: Why did the Chiefs quarterback make his bed out of straw?
A: To feed his night mares (about getting sacked!)

Q. How are the Oakland Raiders like lazy neighbors?
A. They rarely pick up a yard.

Q: Where does Damien Williams go to dance?
A: At a foot ball!

Q: What’s the difference between the Raiders and a dollar bill?
A: You can always get four quarters out of a dollar bill.

Q: What is the difference between a Raiders fan and a baby?
A: Babies stop crying after awhile.

Q: Why did Tanoh Kpassagnon go to the bank?
A: To get a quarter back.

Q: What do you call 53 millionaires around a TV watching the Super Bowl?
A: The Oakland Raiders.

Q: What do you call a Raider at Super Bowl LIV?
A: A spectator…

Q: What does the chiefs coach and the mailman have in common?
A: Neither delivers on a Sunday.

Q: How do you keep a Kansas City football player out of your yard?
A: Put up goal posts.

Q: What does Gehrig Dieter and the Post Office have in common?
A: Neither is open on Sundays!

Q: What’s the best way to teach your dog to roll over?
A: Have him watch the Raiders defense play a game.

Q: What do you call an Oakland Raider at Superbowl LVI?
A: Lost.

Q: What’s the difference between Chiefs fans and mosquitoes?
A: Mosquitoes are only annoying in the summer.

Q: Why shouldn’t toddlers wear Harrison Butker jerseys?
A: Too much of a choking hazard.

Q: According to a new poll 95 percent of people love Sundays.
A: The other 5 percent are Raiders fans.

Q: Where should you go if you are scared of catching a cold?
A: The Chiefs end zone – they don’t catch anything there.

Q: What do quarterbacks call Kansas City defensive lineman when they’re heading their way?
A: They don’t call them anything – they just run!

Q: Why are centipedes not allowed to play for the Chiefs?
A: It takes too long to put their cleats on.

Q: How do you hire a Chiefs punter?
A: By putting him on stilts.

Q: What did Anthony Hitchens (Chiefs Linebacker) have stuck in his teeth?
A: A Raiders quarterback.

Q: What do KC players wear on Halloween?
A: Face Masks!

Q: What kind of pastry did Art Still eat most?
A: Turnovers!

Q: What kind of tea do Chiefs Cornerbacks drink?
A: Penaltea

Q: Why was the tiny ghost asked to join the Chiefs football team?
A: They needed a little team spirit.

Q: Why didn’t the dog want to play football for Kansas City?
A: It was a boxer.

Q: Where is a ghost’s favorite spot on a Arrowhead Stadium?
A: Under the ghoul posts!

Q: Why did the football quit playing with the Chiefs?
A: It was tired of being kicked around.

Q: Why doesn’t the Raiders football team have a website?
A: They can’t string three W’s together…

Q: How are scrambled eggs like the Raiders?
A: They’re both beaten.

Q: Why is it always warmer at Arrowhead Stadium after the game?
A: All the fans have left.

Q: What happens to Chiefs players who go blind?
A: They become referees.

Q: Which Chiefs player can jump higher than a house?
A: All of them – houses can’t jump at all.

Q: How did the Chiefs know which players were fan favorites?
A: They took a gallop poll.

Q: Where did Priest Holmes like to eat?
A: Fast food restaurants (because he was fast).

Q: Which NFL Super Bowl match up caused the most arguments on the ranch?
A: Cowboys vs. Chiefs. 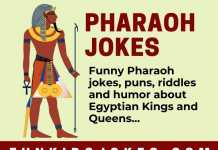 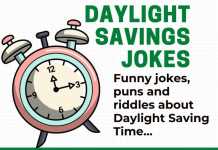 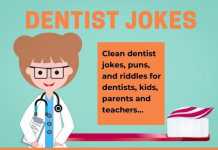