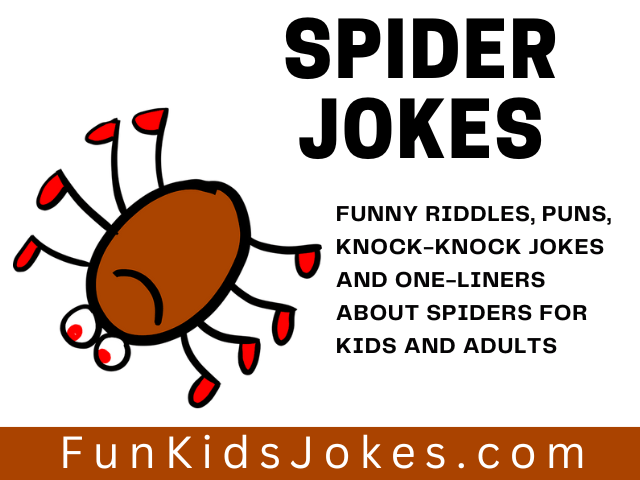 Spider jokes for the entire family! Check out this collection of spider jokes – great for parents, teachers and kids of all ages. Halloween is a popular time for spider jokes, but is there ever a bad time for jokes about spiders? Nope!

These spider jokes are clean, so no worries about letting children read them. Have a little fun and put some in your child’s lunch box (the spider jokes, not spiders!)

Fun spider facts? Antarctica is the only continent in the world where you can’t find any spiders. Arachnophobia is the fear of Spiders and is one of the most common fears in the world. Spider blood is light blue in color.

We hope you enjoy the Spider Humor we have for you. Keep checking back as we add more jokes about the creepy, crawly Arachnids that make a lot of people jump.

Q: Why did the spider teen get in trouble with his mom?
A: He spent too much time on the web.

Q: What are spider webs good for?
A: Spiders.

Q: Who was the most famous baseball playing spider?
A: Ty Cobweb.

Q: What do you call an Irish spider?
A: Paddy long legs.

Q: What did the sad spider say to the fly?
A: Buzz off.

Q: What do frogs like to drink in the Fall?
A: Apple Spider.

Q: What kind of doctors are like spiders?
A: Spin doctors.

Q: What was the spider’s favorite TV show?
A: The newly web game.

Q: Why are spiders such good swimmers?
A: They have webbed feet.

Q: What does annoying a spider do?
A: Drives it up the wall.

Q: Why do spiders like living in haunted houses?
A: Because ghosts can’t break their webs.

Q: Why did the spider get a job at Google?
A: It was a great web designer.

Q: Why did the witch’s spider keep getting lost?
A: The leash was too loose.

Q: What happened when the man bit into a sandwich with a daddy long legs in it?
A: It became a daddy short legs.

Q: What do you do when you find your pet spider’s cage left open?
A: Walk carefully.

Q: What do lizards like to eat during the fall months?
A: Apple Spider Donuts.

Q: What do you call spiders who just got married?
A: Newlywebs.

Q: Why are spiders such good baseball players?
A: They know how to catch flies.

Q: What do spiders order in Paris restaurants?
A: French flies.

Q: Why do spiders spin webs?
A: Because they can’t crochet.

Q: What is a spiders favorite day?
A: Flyday.

Q: Why are spiders happy when it’s Halloween?
A: Because everyone thinks their fake – until they jump on them.

Q: What outdoor sport do spiders like?
A: Fly fishing.

Q: What do you call a special agent spider?
A: A Spy-der

Q: What do spiders always have with them when they play Scrabble?
A: WEBster’s Dictionary.

Q: How do spiders get married?
A: They have a webbing?

Q: How do spiders communicate?
A: The world wide web.

Q: When is it a good thing to see a Black Widow?
A: When she’s the Black Widow super hero coming to save you!

Q: What has 72 legs and catches flies?
A: A spider baseball team.

Q: What baseball position do spiders like most?
A: The outfield because they catch the most flies.

Q: Which spider might you see when there’s a full moon?
A: The WOLF spider.

Q: Why are spiders so scary on Halloween?
A: Because they’re spiders!

Q: Why did the girl swallow the spider?
A: To see if it would wriggle and jiggle inside her.

Q: What do you call a arachnid who works for the CIA?
A: A SPY-der

Q: Why are spiders like toy tops?
A: They are always spinning.

Q: What do you get when you cross a spider with an ear of corn?
A: Cobwebs.

Q: What did the spider say to the fly on Halloween?
A: This web is the trick and you’re the treat.

Q: Why job offer did the witch put in the spider newspaper?
A: Potion ingredient wanted, no experience needed.

Knock Knock.
Who’s there?
Luke.
Luke who?
Luke out for that spider!

Knock Knock
Who’s there?
Fangs
Fangs who?
Fangs on the spider on your shoulder!

Knock, knock!
Who’s there?
Harry.
Harry who?
Harry spider coming to get us.

Knock, Knock.
Who’s there?
Dawn.
Dawn who?
Dawn leave me out here with all these spiders!

Knock, Knock.
Who’s there?
Eiser.
Eiser who?
Spider’s Eiser glowing in the dark.

Knock Knock
Who’s there?
Haden.
Haden who?
Haden out so the spider doesn’t get me.

Knock, Knock.
Who’s there?
Howie
Howie who?
Howie going to get past that spider web?

Knock, Knock.
Who’s there?
Hope.
Hope who?
Hope there are no spiders in my trick or treat bag…

Knock, Knock.
Who’s there?
Iran.
Iran who?
Iran away from the tarantula!

Knock, Knock.
Who’s there?
Luke.
Luke who?
Luke at the big spider on your arm!